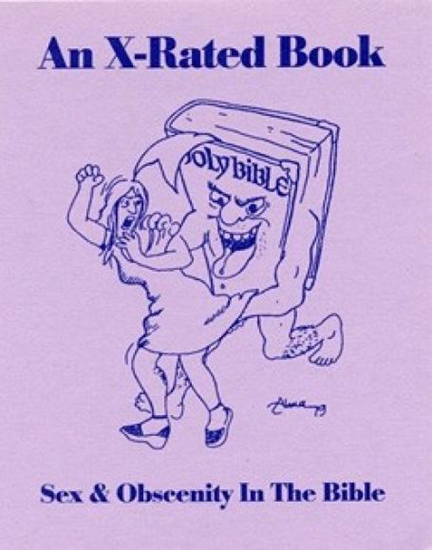 Florida remains a key religious battleground as atheists in the state have once again strategized a means to ensure Bibles are not distributed in area schools, this time with plans to distribute pamphlets depicting a cartoonish human-like Bible sexually assaulting a terrified woman. The pamphlet, titled “An X-Rated Book: Sex and Obscenity in the Bible”, emphasizes biblical passages that mention sex, nudity, and circumcision which The Freedom From Religion Foundation (FFRF) describes as “obscene”. According to FFRF Legal Counsel Andrew Seidel:

“I think the bottom line is, you can’t consider any of our materials obscene when compared to the Bible.”

According to the Christian Science Monitor, the brazen play is intended to stymie Florida’s annual National Religious Freedom Day:

“On National Religious Freedom Day, which is Jan. 16, the Orange County Public Schools have allowed outside religious groups to passively distribute approved literature, like Bibles, for students to take should they choose. According to reports, FFRF plans to distribute “An X-Rated Book” and other pamphlets in 11 public high schools in Orange County, Florida, next year.”

In a press release posted on the FFRF website, the organization says it also plans to distribute anti-religious pamphlets which the school district says “assert that God is hateful, arrogant, sexist, and cruel” as well as copies of Robert Price’s book, Jesus is Dead.

In the coming months, FFRF intends to expand its fight throughout the United States. As Seidel told CNS News:

“We’re focusing on Orange County for the moment, but we will probably be expanding to other school districts that allow this.”

The FFRF’s move follows a similar play by Florida’s Satanic Temple who attempted to hand out pamphlets to school kids in Florida titled The Satanic Children’s Big Book of Activities.