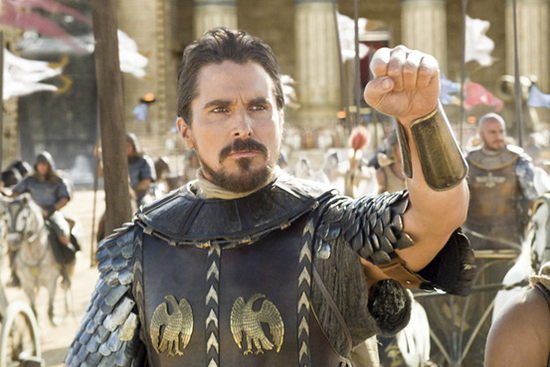 In an era where actors and actresses enthusiastically publicize the movies they headline in, we’re not sure if Christian Bale, star of the Exodus movie, has lost his mind or simply forgot how to use it as he continues to distance himself from the very people the movie should appeal to. Bale has recently caused a lot of angst among Christians with his numerous unflattering remarks about Moses, the biblical figure he portrays in the movie Exodus: Of God and Kings. Bale began his series of odd rants at a press conference in Los Angeles where he said:

“I think [Moses] was likely schizophrenic and was one of the most barbaric individuals that I ever read about in my life.”

Bale acknowledges that he knew little about the Bible before taking on the role and unfortunately, it looks as if he made little effort to learn the meaning behind the stories from the Good Book before insulting those who take the Bible seriously. Bale later went on to call the Egyptian icon “troubled” and “tumultuous” and insisted that Moses would be labelled a terrorist if he lived today.

“He was absolutely seen as a freedom fighter for the Hebrews, but a terrorist in terms of the Egyptian empire. What would happen to Moses if he arrived today – drones would be sent out after him, right?”

In a later Wall Street Journal interview, Bale continued his religious mockery when asked about how he “internalized” Moses’ back story.

“I come at him from a human perspective: I was chasing some sheep up a mountain recently and I got hit on the head by a rock. And when I came around, I spoke with God. And he told me things. And I’m changed forever.”

Despite his claim to have read the Pentateuch, the Torah, and other supporting religious texts, Bale seems to have missed the point that not only were these religious works written by multiple people from various vantage points but that biblical characters are not perfect, sinless creatures – and that includes Moses. Moses was adopted, raised as an Egyptian pagan, and resisted being the “chosen one”. But schizophrenic, barbaric, mentally unbalanced?  Those harsh characterizations hint that Bale is out of touch with his fan base or more likely, making a conscious attempt to distance himself from the religious right.

Note: I would be remiss if I did not mention Exodus creator Ridley Scott’s bizarre proclamation that Moses was the world’s “first environmentalist” or his 2012 comment about religion in general:

“Can you think of a single one – a just, kind, and tolerant religion? The biggest source of evil is religion!”

Movies are exciting and fun but let’s not forget that they are fictional stories, made for self promotion and corporate profit, and that our source for biblical lessons should be the Bible itself. Regardless, given the attitudes of the movie’s creators and lead actors, I think Exodus is one movie I will skip.