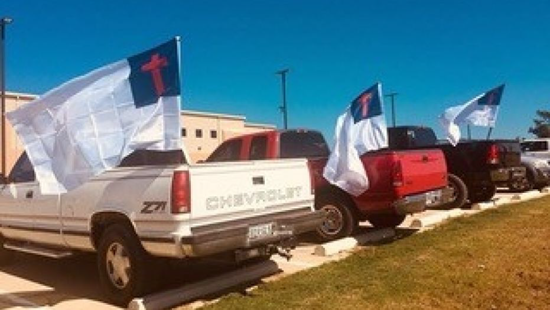 FFRF (Freedom from Religion Foundation) has slithered back into Texas, this time to battle LaPoynor High School in an attempt to force the LaRue, Texas school to remove a Christian cross flag flown during a “See You at the Pole” event. However, students at the school refused to back down and took it upon themselves to fly the Christian flag on their personal vehicles.

The attack against the school began on October 11, 2017 when FFRF attorney Sam Grover sent Superintendent Jame s Young a letter outlining “several constitutional violations occurring in La Poynor Independent School District”. According to the letter, displaying the flag during the SYATP event violates the Establishment Clause. The group also complained about the school’s use of Facebook to allow students the outlet to announce the event. For good measure, FFRF tossed in a complaint about a Bible shown in the background of a Baccalaureate announcement. Much of FFRF’s evidence was taken from students’ Facebook posts announcing the event.

In response to FFRF’s demands, students at the East Texas high school brought their own Christian flags. Local news station KETK reported that a group of students responded to FFRF’s demands by flying three large Christian flags from the back of pickup trucks parked in the school’s parking lot. A photo of trucks was posted to Facebook by Danielle Reichert-Davis with this comment:

“So you didn’t like the one flag we had flying, how about three more. We have a great group of kids I tell you what.”

In response to the letter from FFRF, Superintendent Young released the following statement to a local news outlet:

“LaPoynor ISD is in receipt of a letter from the Freedom From Religion Foundation in which they take issue with some district practices regarding religious expression. As always, we appreciate members of our community bringing any matters of concern to our attention. We are in the process of reviewing the concerns addressed in the correspondence and will take any action deemed necessary.

LaPoynor ISD is committed to achieving an appropriate balance between permissible religious expression and the obligation to maintain neutrality in its policies and practices.”