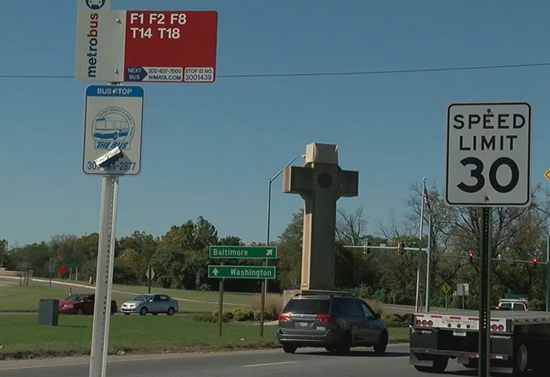 On Wednesday, October 18, 2017, the three-judge panel of the U.S. Court of Appeals for the 4th Circuit in Richmond, Virginia ruled that a cross erected in a public memorial in the 1920’s violated the Establishment Clause and was unconstitutional. The lawsuit was brought by a Washington-based atheist organization, American Humanist Association (AHA), who base their routine attacks on Christianity behind the façade of promoting a moral society without religion (see this article for an in-depth discussion on why societies have never succeeded without organized religion in place).

Senior counsel for AHA applauded the court’s demand to tear down the cross and explained:

“The court correctly ruled that the cross unconstitutionally endorses Christianity and favors Christians to the exclusion of all other religious Americans.”

The 40-foot cross was part of a 1926 American Legion memorial project. Known variously as the Peace Cross and the Bladensburg Cross, the monument was erected on public property at a three-way junction of roads in Bladensburg, Maryland in commemoration of the town’s World War I war casualties. In their argument, AHA convinced the judges the cross was predominantly a symbol of Christianity and not representational of peace and goodwill and thus any observer would naturally conclude the purpose of the government entity that owns the cross was to endorse Christianity.

The decision reverses an earlier (2015) decision that found the purpose of the cross was not primarily religious. At that time, U.S. District Judge Deborah K. Chasanow ruled in favor of the cross. She said,

“Although the Latin cross is undeniably a religious symbol … Other courts have recognized that displaying a cross to honor fallen soldiers is a legitimately secular purpose, and does not always promote a religious message.”

First Liberty Institute actively worked to defend the Bladesnburg Cross. Hiram Sasser of the institute warned the decision sets “a dangerous precedent by completely ignoring history, and it threatens removal and destruction of veterans memorials across America.” Kelly Shackelford, president and CEO of First Liberty told reporters the group was exploring all options including an appeal directly to the U.S. Supreme Court.

AHA’s attack on the Bladensburg’s Peace Cross followed their routine modus operandi – a letter was written to town officials demanding the cross be removed followed by a lawsuit supported by a handful of residents living somewhere near the area.