The Masoretic Text and its importance to modern-day biblical translations 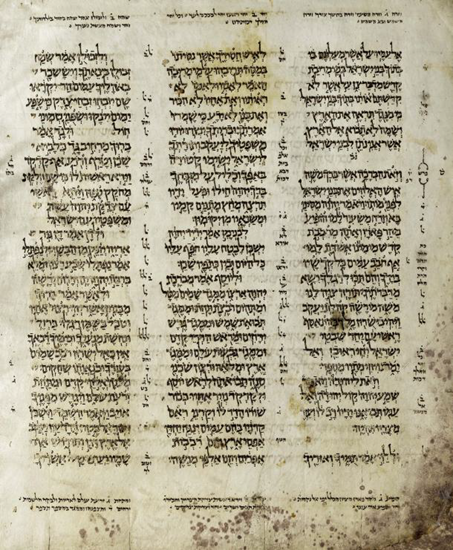 What is the Masoretic Text?

The language used in the Masoretic Texts was primarily Aramaic (a family of ancient languages widely used in the Near East) but also contained some Hebrew language.  An example of Masoretic Text appears below.  In the Hebrew text below, the blue diacritic marks indicate the accentuation put on the letter while the red diacritical signs point out the vowels and alternate pronunciations of the word.

How was the Masoretic Text created?

It is believed that the Masoretic Text was maintained sometime between 100 and 500 AD by a group of scribes and scholars from Jerusalem, Tiberias, and Babylonia, known as the Masoretes.  Beyond the contribution and preservation of the Masoretic Text, the Masoretes scholars devised a vowel notation system for Hebrew that is still widely used today.

Comparison of Masoretic Text to even earlier translations, such as the Qumran and Septuagint (a Greek translation from 200-300 BC that was popular in Egypt and the basis for several New Testament quotes), shows them to be nearly identical with regional spelling and diacritic variations being the primary differences (neither of which altered the meaning of the word).  Comparison of Masoretic Text with other ancient translations (e.g. Dead Sea Scrolls) provides ample evidence that Masoretes scribes took great care in protecting the accuracy of the original texts.  The idea of maintaining a perfect text was so important to the Masoretes that even a deviation in a single letter would make a Torah scroll invalid.

Ancient Masoretic codices (bound copies of the writings) included “mesorah” markings that were used to show the correct pronunciation and emphasis on letters and words. The diacritical markings (i.e. “accents”) also marked musical notes used when the biblical  text was chanted in the synagogue.  In addition to diacritical marks, these ancient texts also contained short annotations in the side margins (known as the “Small Masorah) and longer notations in the top and bottom margins (known as the Large Masorah or Outer Masorah).  Mesorah notes pointed out possible variants in words and provided more extensive documentation regarding the meaning and translation of passages.  The Small Masorah often contained references to other readings as well as statistics showing the number of times a particular word form could be found in the Scripture as well as the count of letters in the passage being referenced (which further ensured the accuracy of the hand-transcribed copies).

Masoretic Texts from around 200 AD exist that document “scribal emendations”, or possible purposeful changes to the ancient text.  The changes, if they were indeed made, were not made in secret and in fact, were well documented by the transcribers.  Scholars have yet to reach a consensus on why these changes, 18 in total, would have been made to the ancient texts.  Some scholars believe the Masoretic Text may have been physically altered while others considered the notations as merely scribal mental notes.

If the text was indeed physically changed, it was most likely done to remove the word “God” from the text or to replace the word with another more “reverent” word.  This may seems shocking to modern-day readers but in ancient times, this was actually the respectful thing to do.  In ancient times, speaking the word “God” (or YHVH) was considered an act of disrespect towards God.  Since the ancient scriptures were often read aloud (sometimes in chants), removal or replacement of the word would have been necessary for the speaker to remain reverent.  Thankfully, scribes documented these possible changes and many modern translations note the potential changes as footnotes in their text.