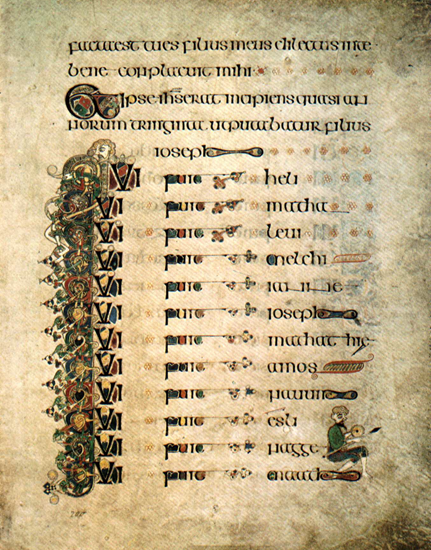 How do we know the genealogical line of Jesus?

The genealogy of Jesus is described in two different passages of the New Testament – one in the Gospel of Luke and the other in the Gospel of Matthew.  Matthew’s attempt at recording the genealogy of Jesus commences with Abraham and then begins again from King David and his son Solomon through the legal line of the kings via Jeconiah to Joseph.  Luke’s attempt gives a different genealogy, going back to Adam, through Nathan, a minor son of David, and again to Joseph.  The lists are identical between Abraham and David, but differ from that point onward.  Traditional Christian scholars have put forward various theories that seek to explain why the lineages are so different with the general consensus being that Matthew’s account follows the lineage of Joseph (Jesus’s legal, but not biological, father) while Luke’s follows the lineage of Jesus’s birth mother, Mary.

Matthew’s genealogy is a partial list of the line, considerably more complex than Luke’s, and is organized in three sets of fourteen (representing a movement through three time periods).  The first set spans Abraham through David (the patriarchs), the second David through Jeconiah (the kings), and the last Zerubbabel through Joseph (private citizens).  Matthew omitted some names from the line – nobody is quite sure why but most likely was done in order to compose the three sets of fourteen that he created or in order to eliminate persons Matthew felt not important to the story.  Three consecutive kings of Judah are omitted from the genealogy: Ahaziah, Jehoash, and Amaziah.  Another omitted king is Jehoiakim, the father of Jeconiah, also known as Jehoiachin.

Luke’s genealogical account runs from Joseph to Adam (or God) including the Davidic line through Nathan, who is an otherwise little-known son of David, mentioned briefly in the Old Testament.  In the ancestry of David, Luke agrees completely with the Old Testament.  Cainan is included between Shelah and Arphaxad, following the Septuagint text (the translation of the Hebrew Text to Koine Greek around 400 AD) though omitted in the Masoretic text (the authoritative translation of the Hebrew text made around 800 AD) followed by most modern Bibles.

Why are they different?

The only two names that are matching in the two genealogies between David and Jesus (besides Joseph), are Zorobabel and Salathiel.  Matthew names 26 descendants while Luke names 41. Scholars have spent ages debating the reason for the difference.

According to some, the differences in genealogies can be attributed to the “Levirate marriage” tradition.  This custom said that if a man died without bearing any sons, his brother could then marry his widow, and their sons would carry on the dead man’s name.

One of the most widely held theories suggests that Matthew’s account follows the lineage of Joseph (the royal line), while Luke’s genealogy is that of Mary (the legal line).  Although it would have been unusual to trace a genealogy from the maternal side, there was nothing usual about the virgin birth. Additionally, if Mary (Jesus’ blood relative) was indeed a direct descendant of David, this would make her son “the seed of David” in keeping with Messianic prophecies.

The Genealogy of Jesus the Messiah

1 This is the genealogy of Jesus the Messiah the son of David, the son of Abraham:

2 Abraham was the father of Isaac,

Isaac the father of Jacob,

Jacob the father of Judah and his brothers,

3 Judah the father of Perez and Zerah, whose mother was Tamar,

Perez the father of Hezron,

Hezron the father of Ram,

4 Ram the father of Amminadab,

Amminadab the father of Nahshon,

Nahshon the father of Salmon,

5 Salmon the father of Boaz, whose mother was Rahab,

Boaz the father of Obed, whose mother was Ruth,

Obed the father of Jesse,

6 and Jesse the father of King David.

David was the father of Solomon, whose mother had been Uriah’s wife,

7 Solomon the father of Rehoboam,

Rehoboam the father of Abijah,

Abijah the father of Asa,

8 Asa the father of Jehoshaphat,

Jehoshaphat the father of Jehoram,

Jehoram the father of Uzziah,

9 Uzziah the father of Jotham,

Jotham the father of Ahaz,

Ahaz the father of Hezekiah,

10 Hezekiah the father of Manasseh,

Manasseh the father of Amon,

Amon the father of Josiah,

11 and Josiah the father of Jeconiah and his brothers at the time of the exile to Babylon.

12 After the exile to Babylon:

Jeconiah was the father of Shealtiel,

Shealtiel the father of Zerubbabel,

13 Zerubbabel the father of Abihud,

Abihud the father of Eliakim,

Eliakim the father of Azor,

14 Azor the father of Zadok,

Zadok the father of Akim,

Akim the father of Elihud,

15 Elihud the father of Eleazar,

Eleazar the father of Matthan,

Matthan the father of Jacob,

16 and Jacob the father of Joseph, the husband of Mary, and Mary was the mother of Jesus who is called the Messiah.

Now Jesus himself was about thirty years old when he began his ministry. He was the son, so it was thought, of Joseph,

the son of God.

In the Hebrew scriptures, with rare exceptions, only the male line is traced.  The descendancy of women is not given and their names are only mentioned in passing.   Since biblically it was the father who determined both national and tribal identity, it was reasoned that only his line was necessary.

Sources: Wikipedia, Till He Comes