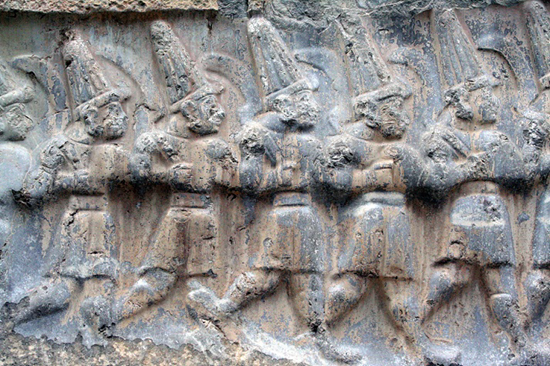 The bible lists nations that inhabited the land of Canaan in several verses. In some verses, the list varies slightly. This is likely because, when ordered by date written, the number of nations decreased as time passes. This hints that some nations (e.g. Kadmonites, Rephaites) disappeared.

Here are the nations mentioned in the Old Testament that lived in the land of Canaan.

Amorites (included in all lists)

The Amorites were an ancient Semitic-speaking people from Syria who occupied large parts of southern Mesopotamia from 2100 BC through 1700 BC.  They built several prominent cities in the area, including Babylon.  They are referenced in both the Bible and ancient Sumerian texts (which calls them and their God, Amurru).  In the biblical texts, they are described as descendants of Canaan, the son of Ham.  They were said to be a tall, powerful race of people (some theorize they were giants).

Canaanites (included in all lists)

The name “Canaanites” is attested, many centuries later, as the endonym of the people later known to the Ancient Greeks from c.500 BC as Phoenicians.  It is a more general term referring to a broad range of people in the area. They occupied a region in the Ancient Near East, which as described in the Bible roughly corresponds to the Levant, i.e., present-day Lebanon, Israel, Palestine, western Jordan, and southwestern Syria.  In biblical usage, the name was confined to the country west of the Jordan, the Canaanites being described as dwelling “by the sea, and along by the side of the Jordan”.  Much archaeological evidence exists which provides information on their culture, laws, and trade activity. In 2017, using DNA collected from skeletons in Sidon, researchers found that present-day Lebanese derive much of their ancestry from a Canaanite-related population.

Girgashites were descendants of Ham (grandson of Noah) and inhabitants of the land of Canaan. Their name may mean “sojourner with a deity”. It is believed the migrated from the land of Canaan before the Israelites returned from Egypt. They may be the Gergesenes mentioned in Mark 5:1. The Ugaritic texts from the Ras Shamra area mention “Girghishi” which may be a reference to the Girgashites.

Hittites (included in all lists)

The Hittites were an Ancient Anatolian people who established an empire in north-central Anatolia around 1600 BC. This empire reached its height during the mid-14th century BC under Suppiluliuma I, when it encompassed an area that included most of Asia Minor as well as parts of the northern Levant and Upper Mesopotamia. The empire came to an end during the Bronze Age collapse.  For a long time, all we knew about Hittites came from the Old Testament Bible which led some to question their existence.  Then in the later 19th century, the first archaeological evidence for the Hittites appeared in tablets found at the Assyrian colony of Kültepe, containing records of trade between Assyrian merchants and a certain “land of Hatti”.  Since then, Archaeological expeditions to Hattusa have discovered entire sets of Hittite royal archives.

Hivites (included in all lists except Genesis 5:19)

To date, little is known about the nation called Hivites outside of the biblical accounts.  They are believed to have lived in northern Palestine and beyond. They are mentioned several times in the bible and most often listed amount the Canaanite nations God would drive out of the land.  They are mentioned living in Gibeon, Shechem, Mizpah, and in the Labanon mountains.  Isaiah mentions their land being deserted which may hint at their demise.  Some believe the Hivites and Horites may be the same entity referenced differently depending on the time.

Jebusites (included in all lists)

The Jebusites are traced through the line of Ham and Canaan and are listed alongside other clans such as the Amorites and Girgashites. They lived in the hill country around Jerusalem. In the time of the judges, Jerusalem (known then as Jebus) was attacked and burned by the men of Judah, but the Jebusites were allowed to stay. Centuries later David captured the city and made it his capital. The remnants of the Jebusites became bondservants during Solomon’s reign.  Modern-day politician Yasser Arafat claimed that Palestinian Arabs are descended from the Jebusites, in an attempt to argue that Palestinians have a historic claim to Jerusalem that precedes the Jewish one, similar to the more common Palestinian Arab claim that they are descended from the Canaanites. However, there is no evidence to support this claim.

Little is known about the Kadmonites whose name means “easterners”. The bible tells us they once inhabited the land of Canaan. Some have placed them in the northeastern part of Palestine. They may have been among the tribes that inhabited the border areas of Canaan. Many believe they are the “children of the east” whose wisdom was widely celebrated.

Kenites were a nomadic tribe (i.e. tent-dwelling) in Canaan that descended from Rechab. They lived on the southern border of Judah where they worked as metalworkers and shepherds. Throughout the bible they are generally friendly with the Israelites.

Kenizzites were a tribe mentioned once in Genesis 15:19. They likely inhabited the land of Canaan near Syria.

Perizzites (included in all lists except Deuteronomy 20:17)

Perizzites are mentioned many times in the Bible. They lived in Canaan before God delivered the land to the Israelites. The name likely means “rural person” or “unwalled village”.

Little is known about the Rephaites. The bible mentions them in various contexts. They may have been a mythical group of people, possibly inhabitants of the underworld, or a true tribe of Canaan comprised of greater-than-average-height people (possibly giants).

Bible Blender’s complete list of Egyptian gods (and how they relate to the Bible).