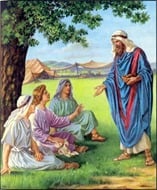 After God delivered Abraham to the land of Canaan, God tested Abraham’s faith once again – this time Abraham faltered.  While Abraham had lived in Canaan, a great famine spread across the country.  Very little rain fell and with little water for the crops, food became difficult to find.  Abraham and his wife Sarai decided to move to Egypt to live until the famine passed.  God did not tell Abraham to do this.  Abraham decided to move to Egypt on his own.

On the way to Egypt, Abraham realized that Sarai’s (i.e. Sarah, his wife) beauty could be a problem.  He feared that the Egyptians would kill Abraham in order to take his wife from him.  He suggested to Sarai (Sehr-eye) that they tell the Egyptians she was his sister instead of admitting that she was his wife.  Abraham felt that if they believed Sarai was his sister then they would treat him well.

As expected, the Pharaoh’s officials, saw Sarai and told the Pharaoh (a type of “king” in Egypt) about the beautiful woman.  She was taken to the Pharaoh’s palace to become a part of the Pharaoh’s harem.  And as Abraham had expected, because of Sarai, they treated him well giving him sheep, cattle, camels, and maidservants.

Sarai was only a member of the Pharaoh’s harem and had not yet become one of his wives.  Still, the treatment of Sarai must have angered God because he in turn, inflicted diseases on the Pharaoh.  The Pharaoh called for Abraham and asked, “What have you done to me? Why didn’t you tell me that Sarai was your wife?”

The Pharaoh returned Sarai to Abraham and asked that they leave Egypt.  He sent men to make sure Abraham was safe on his journey and allowed Abraham to take all the gifts the Pharaoh had given him.  Abraham became very wealthy because of his stay in Egypt but his lack of faith almost caused him to lose his wife.

God’s people should trust him completely

Abraham’s situation shows us that God’s people should trust him completely and not resort to self-directed schemes that may go against what God would want us to do.  Abraham nearly destroyed the agreement he had with God when he took his self-directed trip to Egypt.  Luckily, God provided Abraham the opportunity to correct his mistake, and as we will soon see, Abraham uses this lesson going forward.

Why Abraham travelled to Egypt

There is no indication that Abraham travelled to Egypt based on God’s instructions.  Abraham appears to have acted on fear rather than trusting God.  Abraham’s decision to travel to Egypt nearly cost him his previous agreement with God. If the Pharaoh had followed through and married Sarai, Abraham would have lost his wife and any chance of having children with her, children that God had promised to deliver the land of Canaan to.  In spite of this, God sent plagues to Egypt so that Abraham would be expelled.

There was no divorce in Egypt, only death could separate a man from his wife, and in enemy territory, a man could be killed for his wife.  Abraham’s lie, that Sarai was his sister, was really a half truth.  Sarai was indeed his half-sister so Abraham chose to only tell Pharaoh part of the truth.

Marriage to a sister

In ancient times, it was acceptable to marry a sister or half-sister.  It was not until hundreds of years later that God provided the Ten Commandments that forbade incestuous marriages.

The verses mention that Pharaoh gave Egypt “maidservants” as part of the riches he bestowed upon Abraham.  It is assumed that during this trip, Abraham acquired Hagar, who later became his slave-wife.

No whitewashing here – God tells it like it is

The Bible does not whitewash Abraham’s story – it openly tells of Abraham’s misguided mistake.  This may surprise some but the Bible tells these surprising truths  in many other instances.  It is open and up front with its readers and presents the historical events, both good and bad, as they truly happened.

Harems in Egypt – the period of purification

Given the dramatic differences between our modern-day society and ancient Egypt, readers may be shocked to hear that Abraham’s wife, Sarai, was taken into a Pharaoh’s harem.  The question in most people’s minds when they read the story is, “Did the Pharaoh have sexual relations with Sarai while she was a part of his harem?”  The answer is almost certainly, “No”.  When a bride entered a ruler’s harem, there was a period of purification that lasted for several months.  During this period, the Pharaoh would not have sex with the woman.  This was a common practice in ancient Egypt.

How rich was Abraham?

How rich was Abraham when he returned?  According to ancient writings, an Arab sheik was considered rich when he owned a hundred to two hundred tents, from sixty to one hundred camels, and a thousand sheep and goats.  The Bible says Abraham was very rich so we must assume he owned far more than just pastoral property.

Why was Sarai considered to be so beautiful?

Sarai was 65 years old when they travelled to Egypt but she lived to be 127 years old.  Hence, at the time of her travel to Egypt, she was considered “middle age”. She had not had children by this time either.  Transcripts and writings from Egypt during this time period indicate Egyptian men thought Egyptian women were quite ugly and therefore, may have preferred foreign women.

Famines in Abraham’s day were typically caused by lack of rain.  The Fertile Crescent was highly dependent upon rainfall.  If the amount of rainfall was even slightly low, drought resulted.

Egypt, with the Nile River running through it, often withstood droughts and survived while outlaying areas floundered.  Ancient Egyptian writings tell of a drought that lasted from 2150 BC to 2000 BC where the level of the Nile was significantly lower than the norm and resulted in poor crop production.  It was common for “rural” people of Palestine to flee to Egypt during these droughts/famines.

10 Now there was a famine in the land, and Abram went down to Egypt to live there for a while because the famine was severe.  11 As he was about to enter Egypt, he said to his wife Sarai, “I know what a beautiful woman you are.  12 When the Egyptians see you, they will say, ‘This is his wife.’ Then they will kill me but will let you live.  13 Say you are my sister, so that I will be treated well for your sake and my life will be spared because of you.”

14 When Abram came to Egypt, the Egyptians saw that she was a very beautiful woman.  15 And when Pharaoh’s officials saw her, they praised her to Pharaoh, and she was taken into his palace.  16 He treated Abram well for her sake, and Abram acquired sheep and cattle, male and female donkeys, menservants and maidservants, and camels.

17 But the Lord inflicted serious diseases on Pharaoh and his household because of Abram’s wife Sarai.  18 So Pharaoh summoned Abram. “What have you done to me?” he said. “Why didn’t you tell me she was your wife?  19 Why did you say, ‘She is my sister,’ so that I took her to be my wife? Now then, here is your wife. Take her and go!”  20 Then Pharaoh gave orders about Abram to his men, and they sent him on his way, with his wife and everything he had.

13 So Abram went up from Egypt to the Negev, with his wife and everything he had, and Lot went with him.

2 Abram had become very wealthy in livestock and in silver and gold.