Hagar and the birth of Ishmael – Hagar flees Abraham’s home and is instructed to return (Genesis 16:1 – 16:16) 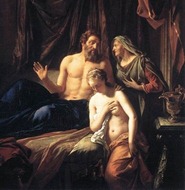 Sarai (Suhr-eye), Abraham’s wife, had not yet had a son as God had promised.  Sarai was getting old and feeling anxious that she may never have a child.  Sarai had an Egyptian maidservant named Hagar (Hay-gar).  Abraham and Sarai obtained Hagar during their travels to Egypt.  Sarai suggested to Abraham that he take Hagar as his wife so she could give Abraham a child.  Abraham agreed.  Saria’s idea worked.   Hagar became pregnant.

Hagar knew, as the customs of the day dictated, that any child born to her would be adopted by Sarai as her own son.  Hagar became jealous and began to act badly towards Sarai.    Sarai complained to Abraham about Hagar’s disrespectful behavior.  Abraham pointed out that Sarai was Hagar’s boss and that she should do whatever she deemed necessary to correct the problem.  As such, Sarai began mistreating her servant.

Angry and hurt, Hagar fled Abraham’s home and headed back to Egypt, 200 miles away.  During her travel to Egypt, an angel found Hagar resting near a spring and asked her, “Where are you coming from and where are you going to?”  Hagar explained that her mistress, Sarai, had been mistreating her, and so she was returning to her homeland in Egypt.  The angel instructed Hagar to return to Sarai and continue being her maidservant.  All was not lost for Hagar though.  The angel promised Hagar that she would have many children, too many too count, and revealed that her soon-to-be-born child would be named Ishmael (Ish-may-el).  The angel pointed out that Ishmael would have a troubled life and would be hostile towards others and that others would be hostile towards him.

Ishmael was born when Abraham was 86 years old.

Sarai became anxious and afraid and instead of heeding God’s words, believing what he promised, and waiting for the results, Sarai took matters into her own hands and made the decision to allow Abraham to have a son through their maidservant, Hagar.  The consequences of her actions were unexpected.  Hagar (HAY-gahr) began acting badly towards Sarai and eventually ended up running away.  Sarai’s plan did not work as she had expected.  We should always heed God’s words, trust in his promises, and be patient as we await the result.

Again, Abraham falters and takes things into his own hands.  He would later learn that God does not intend to provide Abraham a child in the manner that Abraham thought.

It is common for the Bible to tell things like they are and not whitewash people’s faults or mistakes.

Barren wife customs of the day

In the biblical days, it was a legal custom for a barren wife to give her maid to her husband as a wife.  Any child born this way was considered to be the child of the original wife and belonged to the wife, not the servant.  According to customs of the day, this was perfectly legal.  The slave, in effect, became a surrogate wife for the husband.  God however, does not always approve of our social customs.

It is interesting to note that this is the first appearance of an angel in the Bible.

Ishmael, Hagar’s son, became the ancestor of the Arabs who to this day, are still hostile towards the Jews, Abraham’s descendants.  The modern strife between Israel and Palestine was a result of Abraham’s and Sarai’s decision to not wait for God to fulfill his promise.

The road to Shur

The location of Shur, where the angel spoke to Hagar, is disputed.  Some believe it is modern day Jifar.  Regardless, the road to Shur is one of the well-known major travel routes to Egypt.

Now Sarai, Abram’s wife, had borne him no children. But she had an Egyptian maidservant named Hagar;  2 so she said to Abram, “The Lord has kept me from having children. Go, sleep with my maidservant; perhaps I can build a family through her.”

Abram agreed to what Sarai said.  3 So after Abram had been living in Canaan ten years, Sarai his wife took her Egyptian maidservant Hagar and gave her to her husband to be his wife.  4 He slept with Hagar, and she conceived.

When she knew she was pregnant, she began to despise her mistress.  5 Then Sarai said to Abram, “You are responsible for the wrong I am suffering. I put my servant in your arms, and now that she knows she is pregnant, she despises me. May the Lord judge between you and me.”

6 “Your servant is in your hands,” Abram said. “Do with her whatever you think best.” Then Sarai mistreated Hagar; so she fled from her.

7 The angel of the Lord found Hagar near a spring in the desert; it was the spring that is beside the road to Shur.  8 And he said, “Hagar, servant of Sarai, where have you come from, and where are you going?”

“I’m running away from my mistress Sarai,” she answered.

9 Then the angel of the Lord told her, “Go back to your mistress and submit to her.”  10 The angel added, “I will so increase your descendants that they will be too numerous to count.”

11 The angel of the Lord also said to her:

“You are now with child

and you will have a son.

You shall name him Ishmael,a

for the Lord has heard of your misery.

his hand will be against everyone

and everyone’s hand against him,

and he will live in hostility

13 She gave this name to the Lord who spoke to her: “You are the God who sees me,” for she said, “I have now seenc the One who sees me.”  14 That is why the well was called Beer Lahai Roid; it is still there, between Kadesh and Bered.

15 So Hagar bore Abram a son, and Abram gave the name Ishmael to the son she had borne.  16 Abram was eighty-six years old when Hagar bore him Ishmael.