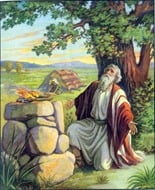 The story of God’s covenant with Abram

After Abraham returned from Egypt a rich man, God spoke to Abraham in a vision.  God told Abraham, “Do not be afraid, I am your shield and your very great reward” meaning, “don’t fret, I will bless you and protect you.”

Referring to God’s earlier promise to give Abraham all the land as far as the eye could see, Abraham asked God, “How can you promise to give this land to all of my children when I have no children to give all of my possessions to?  Without any children, everything I own will go to my servant.”

God countered, “Your servant will not gain your inheritance.  You will have a son that will inherit everything that you own.”  God further explained by way of an example.  He took Abraham outside and pointed to the stars.  He said, “Look at the sky and count the stars.  They are innumerable, just as your number of heirs will be.”

God also told Abraham that his descendants (his children, grandchildren, and their grandchildren) would be strangers in this land and enslaved for 400 years (four generations of descendants).  God said he would then punish the nation that held them as slaves but not until 400 years had passed, the amount of time it would take for their sin to reach a pinnacle of evilness.

God reiterated that after the 400 years passed, they would be set free and have many great treasures.  God also told Abraham that he would live to be an old man but would still die before all of these promises were fulfilled.  We will of course see later on (in the book of Exodus) that this indeed came true when Egypt repressed the Israelites from 1876 BC to 1445 BC – for a period of 430 years.

God concluded by again reminding Abraham that Abraham’s descendants would receive all the land and explaining in detail, that the land would come from the Kenites, Kenizzites, Kadmonites, Hittites, Perizzites, Rephaites, Amorites, Canaanites, Girgashites and Jebusites.

Faith is not always easy

Abraham had great faith but he still worried.  Faith is not always easy and from this story, we can tell that it was not easy for Abraham either.  Nowhere in the scripture are we told that there is anything wrong with asking God honest questions or seeking assurance.  God understands that faith is not an easy thing for us.

How important is faith?

Despite the difficulty, Abraham maintained his faith.  His faith waivered several times and the Bible pointedly makes us aware of this.  In Abraham’s case, it must have been difficult to accept a promise from God that he knew he would never see the fulfillment of (as God told Abraham, he would die before the 400 year period of enslavement ended).  What we learn from Abraham’s faltering is that the one quality that God most desires is faith.

How long was Abraham waiting for a son?

Abraham’s faith was truly tested and he showed great will.  At the time, Abraham was 85 years old and had been waiting 10 years for God to fulfill his promise of a son.

The promises God made to Abraham did indeed come true and are documented in the book of Exodus.  God allowed 400 years to pass before taking the land away and giving it to the Israelites.  God specifically told Abraham that he would not take the land away from the sinners until absolute justice required it be taken away.

Where was the promised land?

God dictates the precise boundaries of the land he promised to Abraham.  The promised land is situated from the great river of Egypt (Wadi el-Arish (WAH-dih-al-ah-REESH), not the Nile River) and the Euphrates.  Israel has not yet taken control of this land but will when Jesus returns to earth.

Documents discovered by archeologists reveal that in Abraham’s day, a married couple who did not have children could adopt a servant who would care for them when they reached old age.  In return, the servant became a proxy child and would inherit their estate.  But, if a son was born to the family, the rights would immediately transfer back to the son.

Genesis 15:9 talks of a sacrifice ritual.  It tells of Abraham walking between pieces of slain animals.  During Abraham’s day, it was common for contracting parties to walk between pieces of animals to seal an agreement.

After this, the word of the Lord came to Abram in a vision:

“Do not be afraid, Abram.

2 But Abram said, “O Sovereign Lord, what can you give me since I remain childless and the one who will inheritc my estate is Eliezer of Damascus?”  3 And Abram said, “You have given me no children; so a servant in my household will be my heir.”

4 Then the word of the Lord came to him: “This man will not be your heir, but a son coming from your own body will be your heir.”  5 He took him outside and said, “Look up at the heavens and count the stars—if indeed you can count them.” Then he said to him, “So shall your offspring be.”

6 Abram believed the Lord, and he credited it to him as righteousness.

7 He also said to him, “I am the Lord, who brought you out of Ur of the Chaldeans to give you this land to take possession of it.”

8 But Abram said, “O Sovereign Lord, how can I know that I will gain possession of it?”

9 So the Lord said to him, “Bring me a heifer, a goat and a ram, each three years old, along with a dove and a young pigeon.”

10 Abram brought all these to him, cut them in two and arranged the halves opposite each other; the birds, however, he did not cut in half.  11 Then birds of prey came down on the carcasses, but Abram drove them away.

12 As the sun was setting, Abram fell into a deep sleep, and a thick and dreadful darkness came over him.  13 Then the Lord said to him, “Know for certain that your descendants will be strangers in a country not their own, and they will be enslaved and mistreated four hundred years.  14 But I will punish the nation they serve as slaves, and afterward they will come out with great possessions.  15 You, however, will go to your fathers in peace and be buried at a good old age.  16 In the fourth generation your descendants will come back here, for the sin of the Amorites has not yet reached its full measure.”

17 When the sun had set and darkness had fallen, a smoking firepot with a blazing torch appeared and passed between the pieces.  18 On that day the Lord made a covenant with Abram and said, “To your descendants I give this land, from the river of Egypt to the great river, the Euphrates—  19 the land of the Kenites, Kenizzites, Kadmonites,  20 Hittites, Perizzites, Rephaites,  21 Amorites, Canaanites, Girgashites and Jebusites.”