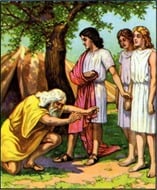 Abraham and the Land of Canaan

Abraham lived in a place called Haran.  God told Abraham to leave Haran and explained that he would guide Abraham to where he needed to be.  He told Abraham, “I will make you into a great nation. I will bless you and I will make your name great.  All people on the Earth will be blessed through you.”

Abraham was very close to God.  So close in fact, that God often spoke to Abraham, providing instructions regarding what course of action to take.  Abraham had great faith in God and always did what God told him.  Based on God’s instructions, Abraham travelled to a place called Canaan where the Canaanites lived.  Abraham took his nephew, Lot, with him to Canaan (Lot’s father had died so Abraham acted as his caregiver).

God told Abraham, “I will give this land to your children.” This must have been a strange thing for Abraham to hear because he was already very old and had no children.

Once they arrived in Canaan, Abraham realized he was surrounded by warlike tribes on every side.  Still, Abraham had great faith in God.  He built an altar in the land of the Canaanites so he could make offerings to God.  From there he moved on toward the hills east of Bethel where he build another altar for God.  It was certainly dangerous for Abraham to openly worship God in front of so many enemies.

The things God asked Abraham to do were very hard.  Imagine if God told you to pack up your things and move and he didn’t tell you where you were going – only that he would tell you when you got there.  Moving was even harder to do in Abraham’s days because ancient people were reliant upon the land to supply food and water.  Still, Abraham obeyed God which took trust, courage, and faith.  In the end, God led Abraham to a wonderful land called Canaan.  When we follow God’s will, he will bless us.

The beginning of the delivery of the land promised to Israel

The story of Abraham’s journey to Canaan is important to us.  This journey was the beginning of the delivery of the land of promise to Israel.

The descendants of Abram (Abraham)

The difficulties of moving

Abraham’s journey was dangerous and difficult.  Much more difficult than modern day families experience when moving across the country.  Throughout their journey they were required to find food and water along the way.  If no food or water could be found, they would die.

Abraham was born in Ur about 4,000 years ago.  At that time, Ur was a center of rich Sumerian culture and a hub of economic activity.  Ur lied along the Euphrates river and was a land of grand architecture, riches, comfortable homes, music, and art.  Abraham essentially left a booming economy for a venture across the desert.

All people on earth will be blessed through you

In verse 3, God tells Abram, “all people on earth will be blessed through you.”  Abram is one of the great forefathers of Jesus.  As God indicated, Christianity spread throughout the world and blessed people across the entire planet.

Note that we refer to Abram as “Abraham” throughout this story for convenience and to enhance understandability.  The bible verses in this instance actually refer to him by his old, original name, Abram.

Abraham’s worship of other gods

This story of faith is even more remarkable considering Joshua 24:2 mentions that Abram at one time worshiped other Gods.  In Ur, where Abraham was born, it was common for people to worship a “moon god”.  It is likely that Abraham worshipped that moon god too.

There is no reason given for God’s choice of Palestine/Canaan for Abraham to journey to.  Possibly the curse on Canaan’s descendants figures into this since in later chapters, we will see that they eventually lost their land to Abraham’s heirs.  The land was delivered to Abraham just as God had promised.

Canaan is a central location too – the hub of Europe, Asia, and Africa.  The land of Canaan comprises all the land from Jordan to the Mediterranean Sea and from Syria to Egypt.

The potential connection to ancient Sumeria

Abraham may have historical ties to Sumeria, the earliest civilization with verifiable recorded history. The Bible tells us that Terah took Abram (and others) from Ur of the Chaldeans to Canaan. Ur was an important Sumerian city-state in ancient Mesopotamia, located at the site of modern Tell el-Muqayyar in south Iraq. Archaeologists have uncovered evidence of occupation in the area to at least 6500 BC. Given the name and location, it is quite likely the Ur mentioned in the Bible is the historical city of Ur, part of ancient Sumeria.

The descendants of Abraham today

Scholars view the story of Abraham’s journey to Canaan as substantially historical and datable.

31 Terah took his son Abram, his grandson Lot son of Haran, and his daughter-in-law Sarai, the wife of his son Abram, and together they set out from Ur of the Chaldeans to go to Canaan. But when they came to Haran, they settled there.

The Call of Abram

12 The Lord had said to Abram, “Leave your country, your people and your father’s household and go to the land I will show you.

2 “I will make you into a great nation

and I will bless you;

I will make your name great,

and you will be a blessing.

3 I will bless those who bless you,

and whoever curses you I will curse;

and all peoples on earth

will be blessed through you.”

4 So Abram left, as the Lord had told him; and Lot went with him. Abram was seventy-five years old when he set out from Haran.  5 He took his wife Sarai, his nephew Lot, all the possessions they had accumulated and the people they had acquired in Haran, and they set out for the land of Canaan, and they arrived there.

6 Abram traveled through the land as far as the site of the great tree of Moreh at Shechem. At that time the Canaanites were in the land.  7 The Lord appeared to Abram and said, “To your offspring I will give this land.” So he built an altar there to the Lord, who had appeared to him.

8 From there he went on toward the hills east of Bethel and pitched his tent, with Bethel on the west and Ai on the east. There he built an altar to the Lord and called on the name of the Lord.  9 Then Abram set out and continued toward the Negev.