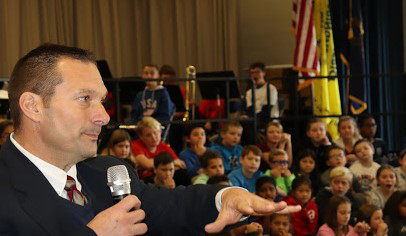 Sabold Elementary School in Springfield, Pennsylvania has always allowed students and teachers to announce “God Bless America” after the morning Pledge of Allegiance. Faculty and students enjoyed the opportunity to show their patriotism while proudly expressing an important aspect of their lives – religion. That changed this month when Principal Peter Brigg’s school bowed to demands from the nationwide atheist organization, Freedom from Religion Foundation (FFRF). According to FFRF, the organization received a complaint from a parent and contacted superintendent Anthony Barber claiming that “God Bless America” is a form of prayer and according to FFRF, “a prayer hosted by a publicly supported school does not pass constitutional muster.”

With embarrassing little effort to fight for the school district’s right to say “God Bless America”, the Springfield School District acquiesced and wrote the atheist organization to announce their change in school policy:

“After the school district’s receipt of your letter, Sabold Elementary School has ceased its practice of announcing the slogan ‘God Bless America’ over the loudspeaker immediately following the recitation of the Pledge of Allegiance. None of the schools in the school district currently engage in this practice.”

FFRF promoted the school district’s defeat in a news release while extending their anti-religion agenda to include calls for banning the Pledge of Allegiance which they point out, contains the phrase “one nation under God”.

Bible Blender reached out to Springfield School District but received no response at the time of publication.