Did John the Baptist and Jesus conspire to create the Messiah story? Here’s where atheist logic breaks down. 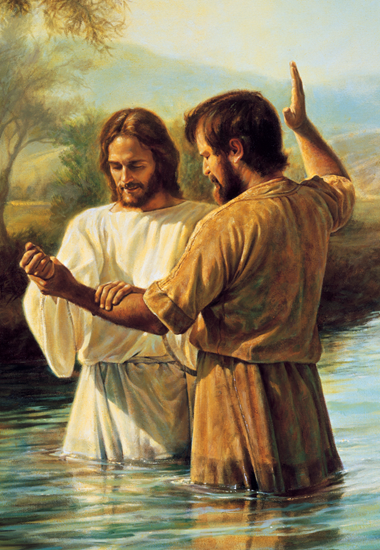 Detractors and non-believers claim that John the Baptist and Jesus conspired to create the Messiah story. They point out that John the Baptist and Jesus were cousins, born only months apart. They highlight that the two grew up together, played together, and naturally would have had their systems of belief coalesce as part of their close relationship. During their time together, based on their shared beliefs, the two cousins created a storyline that required John the Baptist pave the way for his cousin, Jesus, to proclaim he was the Messiah. The problem with this supposed narrative, regardless of several obvious breakdowns of logic, is that much of this storyline is untrue, never mentioned in the biblical verses nor outside historical references.

Only Luke mentions the relationship between Mary and Elizabeth

Only the Gospel of Luke tells us that John the Baptist and Jesus were related. No other gospel mentions a relationship between the two men and even Luke does not directly categorize the relationship but only that Elizabeth and Mary were “relatives”, possibly through marriage only (Luke 1:36). Still, Luke’s record of the men’s relationship differs from the accounts recorded in the other three gospels, especially the account in John 1:33 where John the Baptist was quoted as saying “And I myself did not know him.”

This has prompted some to question the authenticity of the Gospel of Luke’s introduction. Several biblical scholars believe the introduction was added or integrated into Luke by the author as he worked to document the events that occurred before Jesus’ ministry. Since Luke was clearly not present at the earliest events, he obtained the story from someone else – and the story could have been incorrect. In addition, there is subtle (but unproven) evidence that Luke was modified by translators even into the 2nd century. Thus, some discount the first chapter of Luke entirely and argue that there is no evidence the men knew each other before Jesus ministry.

If we take the modern-day translation of Luke as legitimate, then the two grew up together -yes?

But let’s continue and assume we take the first chapter of Luke as canonical truth (as most Christians do), that John the Baptist and Jesus were related. Then it goes without saying that we must take the story as told in Luke as evidence in our argument (since this is the only place the relationship was mentioned). Unfortunately, for detractors seeking to claim a ruse, Luke’s version of events destroys their remaining arguments. Nowhere does Luke say the two men grew up together. In fact, it strongly hints that they lived some distance apart.

Luke tells us that Mary was informed that Elizabeth was in her sixth month of pregnancy by the angel Gabriel. Hearing the news, Mary rushed to “a town in the hill country of Judea”. The verses go on to tell us that Mary stayed with Elizabeth for three more months (to around the full-term of Elizabeth’s pregnancy) before returning home. All of this suggests the two lived quite a distance apart – destroying the scenario of John the Baptist and Jesus growing up together as children.

Of course we can say “but they could have grown up together” and certainly, it is possible – but this would be solely conjecture with no supporting evidence – and logic does not work like that. Given what Luke tells us, already the detractors’ claims are little more than fantasy and conjecture.

Did John the Baptist set everyone up to believe Jesus was the Messiah?

Many of the verses tell us that John recognized Jesus was the Messiah even though John the Baptist’s message precluded Jesus’ ministry. But the Baptist’s preparation for Jesus’s arrival was nothing more than the announcement that one greater than himself was coming. Surprising to many, John the Baptist’s ministry, lessons, beliefs, and teachings differed greatly from Jesus’ – not the strategy you would expect two conspirers would implement to mislead others.

The two had very different philosophies. John (and many of the Pharisees) believed the messiah would be akin to a great warrior who would arrive suddenly and conquer all who did not believe (or stood in his way). Matthew 3:11 quotes John as saying,

“I baptize you with water for repentance but after me comes one who is more powerful than I, whose sandals I am not worthy to carry. He will baptize you with the Holy Spirit and fire. His winnowing fork is in his hand, and he will clear his threshing floor, gathering his wheat into the barn and burning up the chaff with unquenchable fire.”

Then Jesus arrived – kind, loving, caring, and refusing to hate or do harm to others no matter how they treated him. In short, he was nothing like John the Baptist believed he would be. This difference may have been what prompted John the Baptist, while he was in prison, to ask Jesus to confirm whether or not he was the Messiah (and if John the Baptist and his followers should wait for another Messiah to arrive).

Did John the Baptist actively work to help Jesus deceive others?

The most bizarre claim is that John the Baptist worked actively with Jesus to deceive others. Not only the Bible, but outside historical references tell us that during the prime period of Jesus’ ministry – John the Baptist was in prison! Matthew 11:2 tells us that while John the Baptist was in prison, “he heard about the deeds of the Messiah”. He did not see firsthand the majority of events but instead, only heard about them from other witnesses. Thus, he had no way to help or even know when Jesus was going to perform miracles. This is supported by outside historical references (e.g. the historical works of Jewish historian, Josephus) that record John the Baptist’s time in prison, the location of his incarceration, and the events surrounding his ultimate execution at the hands of Herod.

Did John the Baptist and Jesus conspire for fame?

The two men amassed followers and converted many to believers – but only in a small region of the Middle East. Their legacy did not grow and spread throughout the world until well after Jesus’ death and resurrection. The true and everlasting legacy of Jesus and the spreading of Christianity occurred through the works of the disciples, not directly (or immediately) by Jesus himself. Additionally, there is zero evidence that John the Baptist nor Jesus ever longed for fame. In fact, the evidence shows both remained humble until the day they died.

The truth: Good chose two men to usher in a new era for mankind

Whether or not John the Baptist and Jesus were cousins is irrelevant to the overall message of the new era Jesus introduced to the world. And the suggestion that the two conspired together is not only without merit and lacking logic but is never mentioned directly or indirectly in any historical nor religious text. The suggestion is nothing more than an invention of modern-day non-believers with no true knowledge nor understanding of the scriptures.

If we take the account documented in Luke as fact (as most Christians do), the bond between the two men occurred the moment Mary greeted Elizabeth in her home. Luke says the baby in Elizabeth’s womb “leaped in her womb” when they met, and that Elizabeth was immediately “filled with the Holy Spirit”. John the Baptist’s role in history took seed at that very moment – foretold by an angel (Gabriel) and prompted by God. He had little choice in his role as “messenger” for the coming Messiah, just as Jesus had little choice in his appointment as the son of God. They were who they were – two men carrying out the directives given to them by God.