Jesus calls a hated tax collector, Matthew, to follow him and become his disciple (Matthew 9:9 – 9:13) 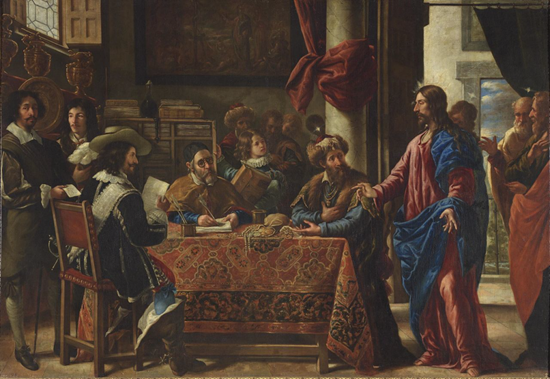 As Jesus journeyed through the land, he saw a man named Matthew sitting in a tax collector’s booth. “Follow me,” Jesus told him. Matthew got up and followed.

While Jesus was eating dinner at Matthew’s house, many tax collectors and sinners came to the home and ate with him and his disciples. When the Pharisees saw this, they asked the disciples,

“Why does your teacher eat with the tax collectors and sinners?”

On hearing this, Jesus said,

“It is not the healthy who need a doctor, but the sick. Go and learn what this means: ‘I desire mercy, not sacrifice.’ I have not come to call the righteous, but sinners.”

A tantalizing, controversial trait – but one that all Christians should strive to mimic

In a living embodiment of “love the sinner, not the sin”, Jesus not only encouraged righteousness and love, but promoted acceptance of sinners. In prior verses (Matthew 5:46), Jesus asked the disciples, “If you love only those who love you, what reward will you get? Are not even the tax collectors doing that?”

Although we may not want to associate with sinners or condone their actions, we should always remember they are human beings worthy of God’s love. Rather than shun sinners, we should take the opportunity to demonstrate the benevolent characteristics of a true Christian and true to our teaching, reveal to them the light we choose to follow.

Tax collectors – the most hated people in the ancient Near East

The story is notable for its association between tax collectors and sinners. In the ancient Near East, the tax collector profession was significantly different from the modern-day tax collector. In Israel, Tax collectors were some of the most hated people in society.

Tax collectors were generally appointed by Roman authorities, often through a bidding system. The job was sought because of the sizeable profits that could be realized by levying higher taxes than Rome required. Citizens were forced to comply or risk imprisonment if a tax collector reported them as delinquent. Truly, tax collectors were sinners who stole from the citizens with impunity.

Jews specifically, regarded tax collectors as traitors because of their association with Rome, a controlling, enslaving power that forcibly ruled over them.

Given the loathing Jews had for tax collectors (and sinners), they viewed anyone who associated with them as scandalous. Here, we see Jesus disregard convention to share a meal with the tax collectors. Later (in Luke 19:1), we will see Jesus stay in the home of a tax collector, Zacchaeus, again prompting questions about his integrity.

The Pharisees’ question, put to the disciples and not Jesus himself, was likely more of an accusation than a query about Jesus’ relationship with “sinners”. Once again, we see the Pharisees challenge the validity of Jesus’ ministry confirming Jesus has become highly visible and considered a threat to the Jewish establishment.

Are Matthew and Levi the same person?

The verses in Matthew (and Luke) tell us Jesus called on a tax collector named “Matthew”. In Mark however, the same story tells us the man’s name was “Levi” (all other details of the story are identical). Scholars are unsure why the names differ when it is obvious that the stories refer to the same person.

There are two potential explanations for the difference. It may be that one name is a common name while the other is a family name (“Levi” may indicate he was a Levite). This is seen in other verses in the Bible where people were called by more than one name.

Another possible explanation is that Levi’s name was not Levi – possibly it was a nickname. It makes sense that a loathed tax collector would use an alias to subtly disguise his identity. Thus, one name may have been an alias used during his tax collector duties, while the other name is his true name, the name disciples would have used to refer to him.

Ironically, it is subtle variations in the scripture that lend credence to the belief that all four gospels were penned by witnesses to Jesus’ life, and not merely copied from each other.

Differences between Matthew, Mark, and Luke’s account of the events

All three gospels say the dinner took place at Matthew’s house after the call of Matthew to follow Jesus. But Matthew records the event after the healing of the paralytic and the exorcism at Gadara. Mark and Luke in contrast, record the incident before the healing and exorcism. Although puzzling to modern-readers, this was not uncommon in ancient writing which tends to follow a more thematic approach to recording historical events. An ancient writer’s objective would be to accurately present the events, not necessarily the order they occurred in. Similarly, we see Matthew record a much more condense version of the events, a technique Matthew used throughout his writings.

Did “Matthew” write the book of Matthew?

It is impossible to know for certain who wrote the book of Matthew, but evidence points to the apostle Matthew as the author of the book that bears his name. Matthew was written sometime between 50 AD and 100 AD and has been the most popular gospel since ancient times. It was first attributed to the apostle around 130 AD by Papias. In addition, the oldest known manuscripts are titled, “According to Matthew”.

“I desire mercy, not sacrifice”

Jesus quoted Hosea 6:6 when he said, “I desire mercy, not sacrifice”. The full verse reads,

“I desire mercy, not sacrifice, and acknowledgement of God more than burnt offerings.”

In response to the Pharisees question (why he dined with sinners), Jesus points the Pharisees right back to their area of expertise – the Old Testament scripture – and tells them to go study the verse in more detail. Jesus’ statement is a critique of Israel’s religious leaders who were keen on Old Testament law while ignoring God’s true intent behind those laws.

A tax booth was a booth placed on the edge of a city to collect taxes from the citizens. The tax collector would charge and collect a sales tax based on the amount and type of goods being brought into the city. The vendor of the goods would then adjust the price to reflect the sales tax he was forced to pay.

Given Jesus’ documented travels, it is believed Matthew met Jesus on the outskirts of Capernaum. A known Roman tax booth was situated at the border between the territories of Philip and Herod Antipas. It is likely at this booth that Jesus called on Matthew to follow him.

When the Pharisees question why Jesus dines with sinners, he tells them to “Go and learn what this means – I desire mercy, not sacrifice.” The phrase “go and learn” was a common formula used by rabbis to draw a reader’s attention to a verse being learned. In this instance, Jesus is using their own formula as a subtle jab at the Pharisees, implying that they are not as learned in the scripture as they may think.

9 As Jesus went on from there, he saw a man named Matthew sitting at the tax collector’s booth. “Follow me,” he told him, and Matthew got up and followed him.

12 On hearing this, Jesus said, “It is not the healthy who need a doctor, but the sick. 13 But go and learn what this means: ‘I desire mercy, not sacrifice.’ v For I have not come to call the righteous, but sinners.”

9 Passing along, Jesus saw a man at his work collecting taxes. His name was Matthew. Jesus said, “Come along with me.” Matthew stood up and followed him.

10–11 Later when Jesus was eating supper at Matthew’s house with his close followers, a lot of disreputable characters came and joined them. When the Pharisees saw him keeping this kind of company, they had a fit, and lit into Jesus’ followers. “What kind of example is this from your Teacher, acting cozy with crooks and riffraff?”

12–13 Jesus, overhearing, shot back, “Who needs a doctor: the healthy or the sick? Go figure out what this Scripture means: ‘I’m after mercy, not religion.’ I’m here to invite outsiders, not coddle insiders.”

9:9 As Jesus went on from there, he saw a man named Matthew sitting at the tax booth. “Follow me,” he said to him. And he got up and followed him. 9:10 As Jesus was having a meal in Matthew’s house, many tax collectors and sinners came and ate with Jesus and his disciples. 9:11 When the Pharisees saw this they said to his disciples, “Why does your teacher eat with tax collectors and sinners?” 9:12 When Jesus heard this he said, “Those who are healthy don’t need a physician, but those who are sick do. 9:13 Go and learn what this saying means: ‘I want mercy and not sacrifice.’ For I did not come to call the righteous, but sinners.”

9 And as Jesus passed forth from thence, he saw a man, named Matthew, sitting at the receipt of custom: and he saith unto him, Follow me. And he arose, and followed him. 10 And it came to pass, as Jesus sat at meat in the house, behold, many publicans and sinners came and sat down with him and his disciples. 11 And when the Pharisees saw it, they said unto his disciples, Why eateth your Master with publicans and sinners? 12 But when Jesus heard that, he said unto them, They that be whole need not a physician, but they that are sick. 13 But go ye and learn what that meaneth, I will have mercy, and not sacrifice: for I am not come to call the righteous, but sinners to repentance.