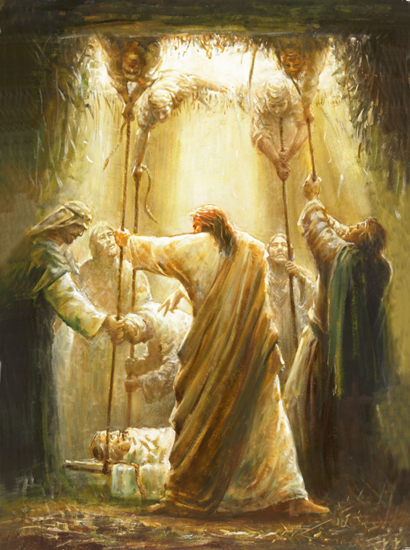 After residents begged Jesus to leave their region, Jesus boarded a boat and re-crossed the sea back to his home town. Some men brought a paralyzed man, lying on a stretcher. When Jesus saw their faith, he said to the man, “Take heart, son, your sins are forgiven.”

At this, some of the teachers of the law (Scribes) said to themselves, “This man is blaspheming!”

“Why do you entertain evil thoughts in your hearts? Which is easier to say, ‘Your sins are forgiven’ or ‘Stand up and walk’? But so you may know that the Son of Man has authority on earth to forgive sins…”

Then Jesus said to the paralyzed man,

“Get up, take your stretcher and go home.”

The man rose and went home.

When the crowd saw this, they were filled with awe. They praised God who had given such authority to a man.

Jesus’ ministry is called into question

This is the first time we see Jesus accused of blasphemy – his ministry is now called into question by the elders of the church.  The race to deliver God’s message and save mankind has begun.

When his integrity is questioned, Jesus does not cower nor get angry. He meets his accusers directly, in an almost humorous manner. In response to the teachers’ accusation, Jesus’ response is simply, “Why do you doubt me? Don’t you think it’s easier to say ‘You are forgiven’ than to heal a man who is unable to walk? Very well, let me take care of the most difficult task first so that you may see.”

Jesus then tells the man to stand – and the man is healed.

Acting on God’s authority, Jesus shows the teachers of the law (experts in Old Testament law) that he had not only the power to heal, but the authority to forgive.

Is there a link between sickness and sin?

The paralyzed man does not rise and walk until Jesus tells him to stand up, pick up his stretcher, and go home. He was healed through his faith and the authority God granted to Jesus. But before healing the man, Jesus told him, “Your sins are forgiven.” Some may take this to imply sickness and disease are imposed on sinners as punishment for their immoral conduct.

The reason for sickness, disease, and bad health is not thoroughly explained in the Bible. In this story, Jesus told the man he was forgiven before healing his sickness. To Israelites, who equated sin with sickness, Jesus’ statement would have made sense – if his sins were removed, the illness would disappear too. But nowhere in the Bible does it tell us that sins will necessarily result in illness or disease. Although sickness may indeed stem from sinful acts (e.g. drug abuse, alcohol abuse, sexual immorality), sin should never be categorized as a precursor to sickness. To do so would be presumptuous and could unfairly stigmatize those suffering from illness or disease.

Which is easier to say, “Your sins are forgiven” or “Get up and walk”?

The point Jesus made to the Teachers of the Law was that it is easy for a person to say “your sins are forgiven” because the act is impossible to discern. The command to “get up and walk” however, is much more difficult because it requires an act of physical healing that is easy to verify.

Jesus uses the incident to demonstrate his authority from God, to show the teachers that God gave him full authority on earth. It was important that the Israelites recognized Jesus’ authority so they could more readily accept the message Jesus was delivering.

Did God give authority to Jesus or all men?

The verses tell us the crowd was amazed and “honored God who had given such authority to men”. Only here in Matthew do we see the phrase “authority to men”. Some argue that “men” refers to the church. This however, is an interpretative stretch.

There’s no reason to believe Jesus’ act led the crowd to believe God’s authority extended to all men. Logic tells us that Matthew intended the phrase “men” to be interpreted as “a man”. Although God grants us “power” to accomplish many things, only Jesus was granted God’s full authority to represent him on earth.

The differences in Matthew’s succinct account of the events

Matthew’s account of the events is shorter than Mark (Mark 2:2) and Luke (Luke 5:17). In Mark/Luke, a group of men carry the man on a mat and find the crowd around the house so large, they cannot get to the door. The men climb atop the house and dig a hole through the roof, then lower the paralyzed man through the hole. Matthew’s writing tends to be abbreviated synopses of the events. For example, Matthew does not mention the intervening actions of the men – how the men were able to get the paralyzed man to Jesus. This is a trait we often see in Matthew’s writing.

The timing of this event differs in Mark/Luke too. It is generally believed that the order of events differs because of the author’s chosen method to present them. In biblical writing, we often see events presented using a topological and logical arrangement – not in chronographic (time) order. This provides flexibility for the author to present their primary message. This was a common method in Near East writings, a literary style that differs greatly from modern-day historical writings. Thus we cannot necessarily assume New Testament events, as presented by each synoptic gospel, are a chronographic ordering of events (see here for a proposed chronology of the New Testament gospels). This is especially true with Matthew’s writings which tend to be thematic arrangements of the events.

A crowd “filled with awe”

The verses tell us that in response to Jesus’ healing of the paralyzed man, the crowd was “filled with awe”. The original Hebrew phrase is closer to “filled with fear”. Fear is often associated with God in biblical writing but in a different context than we understand today. In modern times, we associate the word “fear” with an aversion to pain or harm. In the ancient Near East, fear was used to describe awe or amazement. In this instance, the astonishment the crowd experienced was especially strong.

Some translations say, “Knowing their thoughts, Jesus said, ‘Why do you entertain evil thoughts in your hearts?’” The translation is closer to “seeing their thoughts” or “noticing their reaction”. This isn’t to imply Jesus, with profound authority from God, could not read a person’s thoughts but rather, in this instance, he seems to have noticed the reaction of the teachers and knew what they were thinking.

Jesus stepped into a boat, crossed over and came to his own town. 2 Some men brought to him a paralyzed man, lying on a mat. When Jesus saw their faith, he said to the man, “Take heart, son; your sins are forgiven.”

3 At this, some of the teachers of the law said to themselves, “This fellow is blaspheming!”

4 Knowing their thoughts, Jesus said, “Why do you entertain evil thoughts in your hearts? 5 Which is easier: to say, ‘Your sins are forgiven,’ or to say, ‘Get up and walk’? 6 But I want you to know that the Son of Man has authority on earth to forgive sins.” So he said to the paralyzed man, “Get up, take your mat and go home.” 7 Then the man got up and went home. 8 When the crowd saw this, they were filled with awe; and they praised God, who had given such authority to man.

Back in the boat, Jesus and the disciples recrossed the sea to Jesus’ hometown. They were hardly out of the boat when some men carried a paraplegic on a stretcher and set him down in front of them. Jesus, impressed by their bold belief, said to the paraplegic, “Cheer up, son. I forgive your sins.” Some religion scholars whispered, “Why, that’s blasphemy!”

4–8 Jesus knew what they were thinking, and said, “Why this gossipy whispering? Which do you think is simpler: to say, ‘I forgive your sins,’ or, ‘Get up and walk’? Well, just so it’s clear that I’m the Son of Man and authorized to do either, or both.…” At this he turned to the paraplegic and said, “Get up. Take your bed and go home.” And the man did it. The crowd was awestruck, amazed and pleased that God had authorized Jesus to work among them this way.

9:1 After getting into a boat he crossed to the other side and came to his own town. 9:2 Just then some people brought to him a paralytic lying on a stretcher. When Jesus saw their faith, he said to the paralytic, “Have courage, son! Your sins are forgiven.” 9:3 Then some of the experts in the law said to themselves, “This man is blaspheming!” 9:4 When Jesus saw their reaction he said, “Why do you respond with evil in your hearts? 9:5 Which is easier, to say, ‘Your sins are forgiven’ or to say, ‘Stand up and walk’? 9:6 But so that you may know that the Son of Man has authority on earth to forgive sins”—then he said to the paralytic—“Stand up, take your stretcher, and go home.” 9:7 And he stood up and went home. 9:8 When the crowd saw this, they were afraid and honored God who had given such authority to men.

9 And he entered into a ship, and passed over, and came into his own city. 2 And, behold, they brought to him a man sick of the palsy, lying on a bed: and Jesus seeing their faith said unto the sick of the palsy; Son, be of good cheer; thy sins be forgiven thee. 3 And, behold, certain of the scribes said within themselves, This man blasphemeth. 4 And Jesus knowing their thoughts said, Wherefore think ye evil in your hearts? 5 For whether is easier, to say, Thy sins be forgiven thee; or to say, Arise, and walk? 6 But that ye may know that the Son of man hath power on earth to forgive sins, (then saith he to the sick of the palsy,) Arise, take up thy bed, and go unto thine house. 7 And he arose, and departed to his house. 8 But when the multitudes saw it, they marvelled, and glorified God, which had given such power unto men.