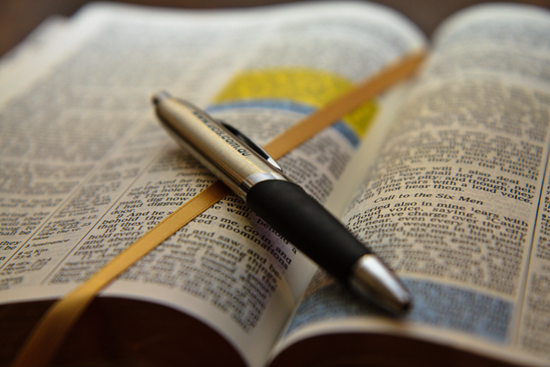 Many Bible readers feel they struggle interpreting the true meaning of the biblical texts. In truth, any translated text will be difficult to understand, and even more so when the text is a sacred religious tome, translated by interpreters who went to great lengths to ensure they did not alter its original meaning in any way.  Nehemiah 8 hints that even ancient readers sought help interpreting the Bible’s message, and provides a wonderful story illustrating how the ancients read and understood the Bible.

“When the seventh month came and the Israelites had settled in their towns, all the people came together as one in the square before the Water Gate. They told Ezra the teacher of the Law to bring out the Book of the Law of Moses, which the LORD had commanded for Israel.

So on the first day of the seventh month Ezra the priest brought the Law before the assembly, which was made up of men and women and all who were able to understand. He read it aloud from daybreak till noon as he faced the square before the Water Gate in the presence of the men, women and others who could understand. And all the people listened attentively to the Book of the Law.

Ezra the teacher of the Law stood on a high wooden platform built for the occasion… Ezra opened the book. All the people could see him because he was standing above them; and as he opened it, the people all stood up. Ezra praised the LORD, the great God; and all the people lifted their hands and responded, “Amen! Amen!” Then they bowed down and worshiped the LORD with their faces to the ground.

The Levites… instructed the people in the Law while the people were standing there. They read from the Book of the Law of God, making it clear and giving the meaning so that the people understood what was being read.”

Reading the Bible can be an easy endeavor – if you have a workable process to follow. Most people can read between 200 and 300 words per minute. At a rate of 200 words per minute, it would take about 65-70 hours to read the Old and New Biblical Testaments, or a little over 10 minutes per day to complete the Bible reading in one year (for a 300 word/min reader it would take about 40-45 days or a little over 7 minutes per day). As an example, here’s a reading schedule that lists the number of chapters in each book of the Old and New Testaments along with the estimated time to read.

Guidelines for reading and understanding the Bible

As you can see, the total reading time does not present an insurmountable task. Even the slowest reader can read the entire bible, cover-to-cover, in less than a year. And everyone is perfectly capable of interpreting and comprehending the Bible’s true meaning if they recognize that the book is a translation of ancient text and follow these simple guidelines.

Put the text in context and beware of preexisting bias

First, note the historical, social, and political setting in which the text was written while considering your own personal pre-existing historical, cultural, and religious biases. It is quite common for a biblical story’s true meaning to differ dramatically when the context under which it was written is taken into consideration. If you are a new Bible reader with little knowledge of its overall message, a good commentary (like Bible Blender) may help reveal the proper context.

In most cases, despite the symbolic or figurative language used in the Bible, the meaning is clear to the reader regardless of any unusual, vague, or exotic words and phrases. Still, consider potential differences in the meaning of words in ancient times and take the time to research the definition of words that you do not know or that seem to be “out of place” in the text. At the same time, take great care in ensuring you do not make the Bible say what you want it to say. Don’t force the text to support your preconceived idea of what it should (or may) say.

Read and interpret scripture as a whole

Don’t restrict yourself by isolating words, verses, paragraphs, or even books. Begin by interpreting at the paragraph level, then the chapter level, but remember to search for the bigger picture throughout.

Read a variety of translations

Read a variety of translations or use a Hebrew/Greek lexicon to coax out the meaning behind the original Hebrew or Greek words. Grammatical practices and sentence structure differed greatly in ancient times and some translations do a better job than others in considering the impact of the differences on the true meaning of the text. However, for a translation to capture the true meaning of the original text, without substantially altering the structure of the text, is an impossible endeavor. Thus, the reading of various translations may be required to fully grasp the author’s message.

Identify the genre of the text you are interpreting

Knowing the genre of the text is critical to understanding the context and purpose of the respective writing. Some of the genres found in the Bible include:

Read it once – read it again

Contrary to what most people think, the New Testament might require a bit more work than the Old Testament. The New Testament was written in Greek (and Aramaic), a complex language filled with abstract concepts and various differences in meaning. As such, studying the New Testament requires a little more diligence and may require a third reading.

Commentaries are often written by subject-matter experts or teams of experts. For instance, these experts possess vast amounts of knowledge about the Sadducees, vital to understanding the Book of Matthew. Similarly, if you have no knowledge of Gnosticism, your understanding of the book of Colossians may differ from an expert’s opinion.

Experts may interpret texts in a manner you had not considered. However, do not place the importance of a commentary’s explanation over your own interpretation and understanding of the Word. Allow God to lead your interpretation and don’t fear challenging experts’ opinions while keeping an open mind.

Think about what you’ve read

Once you’ve completed the study of the text, take the time to stop and consider how the principles it revealed could apply to you today. And if you really want to retain what you just learned – make the effort to pass it along to someone else.

Other factors to consider when reading the Bible

In many instances, it may help to understand the geography of the story. The Bible’s story took place over many locations, most of which are unfamiliar to modern-day readers. A Bible atlas will assist by injecting into the story, a concrete backdrop which may help put the message in context with the time it was written.

Should you read the Old Testament?

Many wonder if they should read the Old Testament. Romans 15:4 tells us:

“For whatever was written in earlier times [the Old Testament] was written for our instruction, that through perseverance and the encouragement of the Scriptures we might have hope.”

When reading the Old Testament, understand that it was written in Hebrew, a simple language with a lot of vague nuances. Its language is very concrete and dry.  Also, the Old Testament is not always in chronological order. Below is a list of the Bible’s chapters in chronological order (note: this is an estimate based on current research and can change).

The Bible chapters in chronological order

Singular or dual meanings in the Bible

Finally, most scholars will say the text in the Bible has a single meaning. I would never constrain myself to such a belief nor would I encourage others to do so. The Bible texts were written by men who were passed knowledge by an entity far greater than Man. To presume such a constraint when interpreting the Bible would be a mistake, one that would prematurely eliminate dual meanings or interpretations that we may simply be incapable of comprehending at this time.

If you have questions during your reading of the Bible, feel free to contact me.  Similarly, if you would like to propose an alternative interpretation of any of the writings on Bible Blender, don’t hesitate to contact me to discuss.  Better yet, register an account on Bible Blender and participate in the open-forum Comments section below.