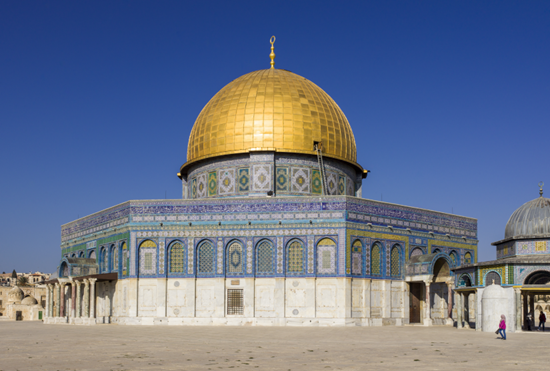 Many Christians remain confused regarding the significance of the Dome of the Rock – what its purpose is, why it is so important to four major religions (Judaism, Christianity, Roman religion, and Islam), and how it came to be located in the middle of Jerusalem. To alleviate the confusion, it is best to begin with a quick history of the Temple Mount, also known as Mount Zion.

Temple Mount, or Mount Zion (sometimes referred to as Mount Moriah), is a hill in Jerusalem just outside the walls of the Old City. Before King David’s conquest of Jerusalem around 1000 BC, the city was home to the Jebusites, the third Canaanite tribe listed in Genesis 10 (between the Hittites and Amorites).  The Bible describes Jerusalem, called the “stronghold of Zion”, as heavily fortified with a strong city wall.  It was conquered by King David (1040-970 BC), an ancestor of Jesus, and became the location of his palace and the City of David.  It was eventually turned over to his son, King Solomon (970-931 BC).

According to the Bible, Solomon’s Temple (aka the First Temple) was built in ancient Jerusalem on the Temple Mount around 800-700 BC and housed the Ark of the Covenant.  It stood for over 400 years before it was pillaged and destroyed by Nebuchadnezzar around 500-400 BC during sieges of Jerusalem and burning of most of the city.

The construction and destruction of the Second Temple

Years later, following a decree by Cyrus the Great of Persia that allowed Jewish exiles to return to Jerusalem, the construction of the Second Temple began on the site of Solomon’s Temple.  It was completed around 515 BC.  Historian Flavius Josephus records that Herod the Great completely rebuilt the Second Temple (other sources claim he only expanded it) going so far as to replace the foundation stones and smooth the surface of the Temple Mount hill itself.

Hundreds of years later, in 70 CE, the Romans, under Titus, squashed a Jewish revolt but according to Josephus, still ordered the entire city be demolished except for Herod’s Temple and some of the walls around the city.  Roman soldiers, angry with continued Jewish attacks and against Titus’ orders, set fire to an apartment building adjacent to the Temple.  The fire spread and the Temple was again destroyed.  The Romans then built a temple to Jupiter on the site. By this time, Jerusalem was primarily Christian-based and pilgrims came by the thousands to walk where Jesus had walked.

In the year 637, military conflict broke out between the Byzantine Empire (the Greek-speaking continuation of the Roman Empire) and Rashidun Caliphate (the first four caliphs, or Islamic rulers that took over after Muhammad’s death in 632).  After a major victory, the Muslim military met to discuss their next conquest and determined that Jerusalem should be their next target.  After a four-month battle, Jerusalem surrendered on April 637 CE.  With Muslims now in control of the area, on the orders of Umayyad Caliph Abd al-Malik, the Dome of the Rock was constructed directly on the site of the Jewish Second Temple, over the stone peak of the mountain known as the Foundation Rock.  The stated purpose of the Dome was to enshrine the sacred rock from which, Muslims believe, Muhammad made al-isra’, the Night Journey and ascended to visit Allah in heaven (Koran 17:1).  The true reason for its construction however, had more to do with the political aspirations of Chaliph Abd El-Malik.

During a time in which the Muslim world was torn between several factions, Chaliph Abd El-Malik felt it best to direct pilgrims away from Mecca where they may fall under the influence of rival Muslim leaders.  According to Dome of the Rock:

“He, therefore, constructed the Dome in the hopes of establishing Jerusalem as the major Muslim pilgrimage destination, so that he could keep his followers and attract new ones. While Mecca has remained the qibla for Muslims, Jerusalem is revered by Muslims as the third holiest place in the world.”

For a time, Christians could still access the holy city of Jerusalem but eventually, escalating violence against pilgrims made access to the site difficult.  In 1095, Pope Urban II proclaimed the first crusade with the stated goal of restoring Christian access to the holy places in and near Jerusalem.  During a 200 year period, there were six major Crusades in a struggle for control of the Holy Land, during which time the Dome of the Rock passed hands several times.

The Crusaders re-captured Jerusalem in 1099 and turned the Dome of the Rock into a church (it was at this time that the Knights Templar, who rightly believed the Dome of the Rock was the site of Solomon’s Temple, set up headquarters in a captured Mosque adjacent to the Dome). On October 2, 1187, the Dome of the Rock was recaptured by the Muslims and reconsecrated as a Muslim shrine. It remained in their hands for many more years afterward – until a period of high tensions and aggressive military movements in the area culminated in Israel launching surprise attacks against their enemies resulting in control of the Gaza Strip and the Sinai Peninsula from Egypt, the West Bank, including East Jerusalem, from Jordan, and the Golan Heights from Syria.

During the 1967 Six-Day War, Israelis hoisted the Israeli flag over the Dome of the Rock before authorities ordered them to lower it and entrusted the Dome to a Muslim religious trust with the authority to manage the Temple Mount in order to “keep the peace”. It is managed by the Ministry of Awqaf in Amman, Jordan to this day while Israelis wait the prophetic building of the Third Temple on the site.

In 2006, the Temple Mount was reopened to non-Muslim visitors between the hours of 7:30–11:30 am and 1:30–2:30 pm during summer and 7:30–10:30 am and 1:30–2:30 pm during winter. Non-Muslims are prohibited from entering after 2:30 pm and may not enter on Fridays, Saturdays, or Muslim holidays. Entry is through a wooden walkway next to the entrance to the Western Wall. Non-Muslims are prohibited from entering the mosques and accessing the Temple Mount through the Cotton Market. Visitors are subject to strict security screening, and items such as Jewish prayer books are prohibited.

The location where Muhammad ascended to Heaven?

According to some Islamic scholars, the Foundation Rock is the spot from which Prophet Muhammad ascended to Heaven accompanied by the angel Gabriel. Further, Muhammad was taken here by Gabriel to pray with Abraham, Moses, and Jesus. After Muhammad’s return, he called all who would believe him to join with him and be Muslim. Other Islamic scholars however, believe that the Prophet ascended to Heaven from the Al-Aqsa Mosque, a mosque near the Dome of the Rock.