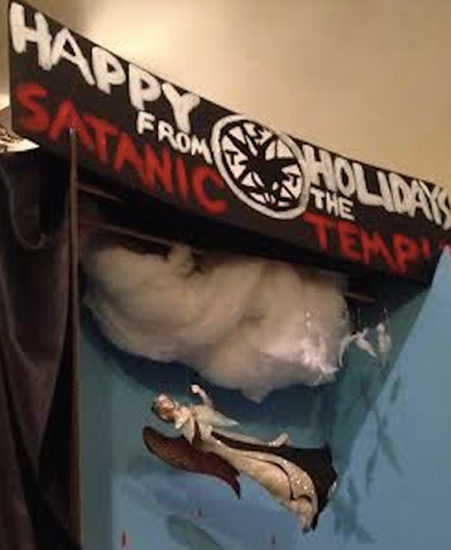 The Satanic Temple’s war on religion took another successful step today when Florida’s Department of Management Services green-lighted the atheist groups’ request to erect a “holiday display” in the Florida Capitol rotunda this year. According to the Americans United for Separation of Church and State, Florida’s Department of Management Services has agreed to allow the temple’s display to be put up, reversing its stance from last year, when officials called the display “grossly offensive.”

The crude display will feature a five-foot structure depicting an angel falling from heaven with verbiage mocking Isaiah 14:12 which reads: “How you have fallen from heaven, morning star, son of the dawn! You have been cast down to the earth, you who once laid low the nations!” The verse is a song of contempt against the king of Babylon but is interpreted by some as a metaphorical reference to the fall of Satan – the antithesis of the birth of Jesus.

To avoid another rebuff this year, the Satanic Temple submitted their request with the help of attorneys from the Americans United for Separation of Church and State, a “religious liberty” watchdog group. Americans United sent a letter to Florida officials explaining that another rejection of the temple’s display would violate the Satanic Temple’s freedom of speech, freedom of religion, and right to equal protection under the law.  As a result, Florida officials capitulated to the groups’ demands and are allowing the display on government property.