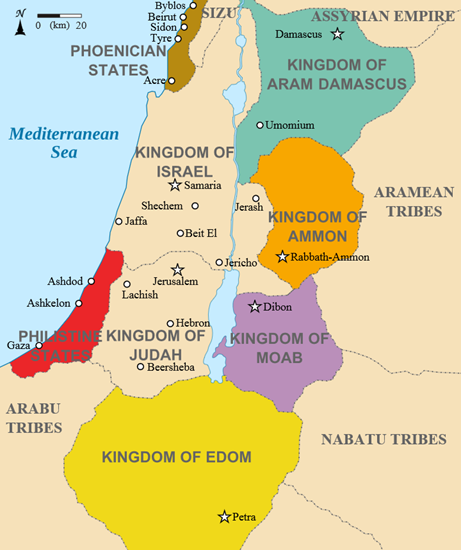 This section of the Bible presents a genealogical account of the line of Ishmael, the son of Abraham and Hager (Sarah’s Egyptian slave). In this story, Ishmael’s sons are listed, some of who prove important to the continuing narrative of the Old Testament.

Ishmael lived to be 137 years old. His sons and their families settled in the area from Havilah to Shur, along the eastern border of Egypt. The passage notes that the “lived in hostility” towards the other tribes they were related to.

The purpose of this passage is primarily genealogical and the sons mentioned play important parts in the upcoming biblical stories.

A comparison of these texts to earlier passages reveals several items that were earlier promised by God are shown here to be fulfilled (e.g. the number of sons Ishmael would have, that they would become leaders of tribes, that they would be hostile towards other nations).

This narrative serves to tidy up Abraham’s family record.  Next, the chronicle will turn back towards Abraham’s chosen line.

Conflict between Ishmaelites and Israelites

The Bible notes that Ishmael’s descendants lived in hostility towards other tribes. This provides a hint of the Ishmaelite/Israelite conflicts that come later in the story.

All twelve of Ishmael’s sons are listed in the biblical text. Some of these names have shown up in other ancient texts providing proof that they did indeed exist as the Bible tells us. Furthermore, many became great tribes ruling specific areas in the East. Some of those areas exist in modern day.  Below are historical notes about the characters mentioned in these verses.

Nebaioth, meaning “fruitfulness”, is probably related to the later-named tribe Nabataeans, an Arabian tribe that occupied the land of Edom and parts of the area east of the Jordan River. Nabataeans were famous for their herds of sheep and were later mentioned in conjunction with Kedar, Ishmael’s second son.  Later Nebaioth will also be mentioned in a metaphor for gentile nations.

Nebiaoth’s sister, Mahalath, will later become one of Esau’s wives.

In addition, many scholars believe that Nebaioth is the Nabaiati mentioned in the 800 BC records of Assyrian king Tiglath-pileser III.

Kedar, meaning “black”, is presumed to be related to the Kedarite tribe referenced in later sections of the Bible. The Kedarites occupied the area south of Palestine and east of Egypt. They were a nomadic tribe that formed villages consisting of semi-temporary black tents. They survived raising sheep, goats, and camels which were sold throughout the area.

The Kedarites were also notorious warriors, particularly their archers, and were a dominant force in the area from the 8th century BC to the 4th century BC.

Kedarites are frequently mentioned in ancient Assyrian and Neo-Babylonian texts.

Adbeel means “miracle of God” or “servant of God”.

Dumah means “silence” and is also associated with a place name, Dumah, meaning “permanent settlement”. A township in Judah called Dumah is located in the south-central hills of Palestine near Khirbet ed-Dome, about nine miles southwest of Hebron. However, the Dumah referenced in Genesis is believed to be modern-day Dumat-al-Jandal (or Ghandal), an area with numerous oases in south central Arabia (about three-fourths of the way from Damascus to Medina).  Known today as Al-Jawf, in ancient times it was mentioned in inscriptions of the Assyrian monarchs as Adummatu and is described as “a fortress of Arabia”, “situated in the desert”, that was destroyed by Sennacherib’s forces.

The Hebrew word for Massa has several possible meanings, two of which are “the burden” or “the oracle”. The Massa have been mentioned in other ancient texts as people who paid tribute to King Tiglath-pileser III of Asyria. Tiglath-pileser was a prominent king in the 8th century BC known to have subjugated much of the known world at the time.

There is a northern tribe called Massa that are likely descendants of Massa. They are located just northeast of Dumah.

Hadad, which could also be translated as Hadar, means “mighty”. This name has been used by several members of the royal household of Edom including the Edomite king notorious for defeating the Midianites.  From this evidence, it is believed that Hadad is somehow related to the Edom kingdom.

The Tema (which is also the name of the district they inhabited) were primarily caravan traders who were known to control access to an important route across the desert. Tema is mentioned as a “remote place” and as an oasis in the desert on a main trade route through Arabia. The city of Tema is also named in historic documents recording the occupation of the area by Nabonidus (the last king to rule Babylon).

Tema is likely associated with modern-day Teima (or Teyma), a strategic oasis located in the northern part of the Arabian Peninsula (toward the Syrian Desert) about 200 miles north-northeast of Medina.

The nations of the Middle East

Islamic traditions consider Ishmael to be the ancestor of Arab people, excluding Arabs who are descendants of Ya’rub (Muslims consider Yarub one of the great Arab kings). Arabs who are from Ishmael-descendant tribes are occasionally referred to as “Arabized-Arabs” to highlight their ancestry.

Jewish traditions are split between those, like Josephus (the ancient historian), who consider Ishmael the ancestor of the Arabs, and those, like Maimonides, who believe that the northern Arabs are descended from the sons of Keturah, whom Abraham married after Sarah’s death.  In some Christian biblical interpretations, Ishmael is used to symbolize the older, now rejected, Judaic tradition while Isaac symbolizes the new tradition of Christianity.

12 This is the account of the family line of Abraham’s son Ishmael, whom Sarah’s slave, Hagar the Egyptian, bore to Abraham.

13 These are the names of the sons of Ishmael, listed in the order of their birth: Nebaioth the firstborn of Ishmael, Kedar, Adbeel, Mibsam, 14 Mishma, Dumah, Massa, 15 Hadad, Tema, Jetur, Naphish and Kedemah. 16 These were the sons of Ishmael, and these are the names of the twelve tribal rulers according to their settlements and camps. 17 Ishmael lived a hundred and thirty-seven years. He breathed his last and died, and he was gathered to his people. 18 His descendants settled in the area from Havilah to Shur, near the eastern border of Egypt, as you go toward Ashur. And they lived in hostility toward all the tribes related to them.

12 This is the family tree of Ishmael son of Abraham, the son that Hagar the Egyptian, Sarah’s maid, bore to Abraham.

13 These are the names of Ishmael’s sons in the order of their births: Nebaioth, Ishmael’s firstborn, Kedar, Adbeel, Mibsam, 14 Mishma, Dumah, Massa15 , Hadad, Tema, Jetur, Naphish, and Kedemah—16 all the sons of Ishmael. Their settlements and encampments were named after them. Twelve princes with their twelve tribes.

17 Ishmael lived 137 years. When he breathed his last and died he was buried with his family. 18 His children settled down all the way from Havilah near Egypt eastward to Shur in the direction of Assyria. The Ishmaelites didn’t get along with any of their kin.

25:12 This is the account of Abraham’s son Ishmael, whom Hagar the Egyptian, Sarah’s servant, bore to Abraham.

25:17 Ishmael lived a total of 137 years. He breathed his last and died; then he joined his ancestors. 25:18 His descendants settled from Havilah to Shur, which runs next to Egypt all the way to Asshur. They settled away from all their relatives.