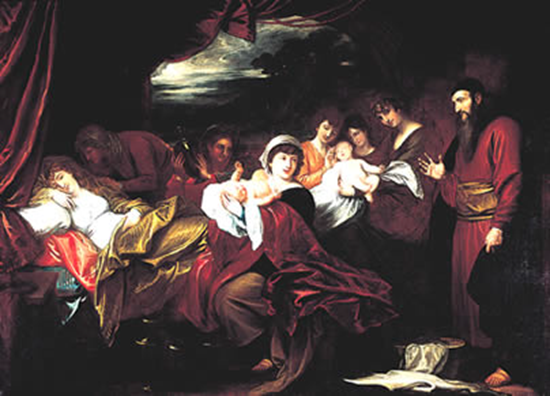 After a quick peek at Ishmael’s genealogical record, the Bible now turns back to the family line of Abraham and Isaac. We are reminded that Abraham was the father of Isaac who, at 40 years of age, married Rebekah.

After 20 years of marriage, Isaac prayed for a child and God answered the call. Rebekah became pregnant. She felt the babies moving inside her (apparently a little more movement that she had expected), so she asked God why this was happening. God replied, telling Rebekah that “two nations” were in her womb, she was pregnant with twins, and a battle was already being waged inside her. God told Rebekah that one of the twins would be stronger than the other and that, opposite of what tradition would normally dictate, the younger one would rule over the firstborn.

Esau was born first and the Bible notes that he was “red” in color and covered with fine hair. Jacob was born next, holding onto his brother’s heel.

The heir apparent, Jacob, was born with inherent promises from God but it is important to note that God’s promises were not fulfilled until Isaac prayed to God and specifically asked for a child. God’s promises may not be carried out until we exhibit faith, and ask for them.

The struggle between the Israelites and Edomites

The struggle for supremacy between Jacob and Esau began even before their birth. As we will see in later passages, Jacob’s heirs (the Israelites) and Esau’s descendants (the Edomites) will struggle continuously.

Putting the timeline in perspective

Although the report of Abraham’s death occurred in earlier passages, from Isaac’s age we can tell that Isaac married 35 years before Abraham died. Since Rebekah gave birth 20 years after their marriage, we can presume that Abraham would have lived to see Jacob and Esau grow up to be young men.

The translation of the passages related to Isaac’s prayer to God are a bit ambiguous. Possible translations hint that some sort of ritual prayer was involved.

Fighting for what is yours

Although Jacob is clearly the link in Abraham’s royal line, recognize that throughout his life, Jacob fought to obtain what God had promised him. He rarely took a passive role and “just let things happen”.

Edom and the Edomites

Esau’s descendants, the Edomites, would live in an area called Edom. Edom was located southwest and southeast of the Dead Sea in a low-lying area that connected the Dead Sea to the Red Sea (Edom’s northern border was Israel). The area is rugged and mountainous. Earlier inhabitants of Edom were the Horites who were destroyed by the Edomites.

Edom is referenced in a thirteenth century BC Egyptian letter granting permission to the Shasu tribes of Edom to enter the eastern Nile delta.

An important highway, known as the King’s Highway (Num. 20:17), passed through the eastern segment of Edom in a north to south direction.

We learn much about the rights of the firstborn through ancient Nuzi documents called “tablet of brotherhood” tablets.  Inheritance was always passed through the male line and upon the patriarch’s death, the firstborn son became the new head of the family.  The patriarch could not arbitrarily assign birthrights to another son except under extremely unusual circumstances.

19 This is the account of the family line of Abraham’s son Isaac.

Abraham became the father of Isaac, 20 and Isaac was forty years old when he married Rebekah daughter of Bethuel the Aramean from Paddan-Aram p and sister of Laban the Aramean.

21 Isaac prayed to the LORD on behalf of his wife, because she was childless. The LORD answered his prayer, and his wife Rebekah became pregnant. 22 The babies jostled each other within her, and she said, “Why is this happening to me?” So she went to inquire of the LORD.

“Two nations are in your womb,

and two peoples from within you will be separated;

one people will be stronger than the other,

and the older will serve the younger.”

24 When the time came for her to give birth, there were twin boys in her womb. 25 The first to come out was red, and his whole body was like a hairy garment; so they named him Esau. b 26 After this, his brother came out, with his hand grasping Esau’s heel; so he was named Jacob. e Isaac was sixty years old when Rebekah gave birth to them.

19 This is the family tree of Isaac son of Abraham: Abraham had Isaac. 20 Isaac was forty years old when he married Rebekah daughter of Bethuel the Aramean of Paddan-Aram. She was the sister of Laban the Aramean.

21 Isaac prayed hard to GOD for his wife because she was barren. GOD answered his prayer and Rebekah became pregnant. 22 But the children tumbled and kicked inside her so much that she said, “If this is the way it’s going to be, why go on living?” She went to GOD to find out what was going on. 23 GOD told her,

Two nations are in your womb,

two peoples butting heads while still in your body.

One people will overpower the other,

and the older will serve the younger.

24 When her time to give birth came, sure enough, there were twins in her womb. 25 The first came out reddish, as if snugly wrapped in a hairy blanket; they named him Esau (Hairy). 26 His brother followed, his fist clutched tight to Esau’s heel; they named him Jacob (Heel). Isaac was sixty years old when they were born.

Abraham became the father of Isaac. 25:20 When Isaac was forty years old, he married Rebekah, the daughter of Bethuel the Aramean from Paddan Aram and sister of Laban the Aramean.

25:21 Isaac prayed to the LORD on behalf of his wife because she was childless. The LORD answered his prayer, and his wife Rebekah became pregnant. 25:22 But the children struggled inside her, and she said, “If it is going to be like this, I’m not so sure I want to be pregnant!” So she asked the LORD, 25:23 and the LORD said to her,

“Two nations are in your womb,

and two peoples will be separated from within you.

One people will be stronger than the other,

and the older will serve the younger.”

25:24 When the time came for Rebekah to give birth, there were twins in her womb. 25:25 The first came out reddish all over, like a hairy garment, so they named him Esau. 25:26 When his brother came out with his hand clutching Esau’s heel, they named him Jacob. Isaac was sixty years old when they were born.

19 And these are the generations of Isaac, Abraham’s son: Abraham begat Isaac: 20 And Isaac was forty years old when he took Rebekah to wife, the daughter of Bethuel the Syrian of Padan-aram, the sister to Laban the Syrian. 21 And Isaac intreated the LORD for his wife, because she was barren: and the LORD was intreated of him, and Rebekah his wife conceived. 22 And the children struggled together within her; and she said, If it be so, why am I thus? And she went to inquire of the LORD. 23 And the LORD said unto her,

Two nations are in thy womb,

And two manner of people shall be separated from thy bowels;

And the one people shall be stronger than the other people;

And the elder shall serve the younger.

24 And when her days to be delivered were fulfilled, behold, there were twins in her womb. 25 And the first came out red, all over like an hairy garment; and they called his name Esau. 26 And after that came his brother out, and his hand took hold on Esau’s heel; and his name was called Jacob: and Isaac was threescore years old when she bare them.