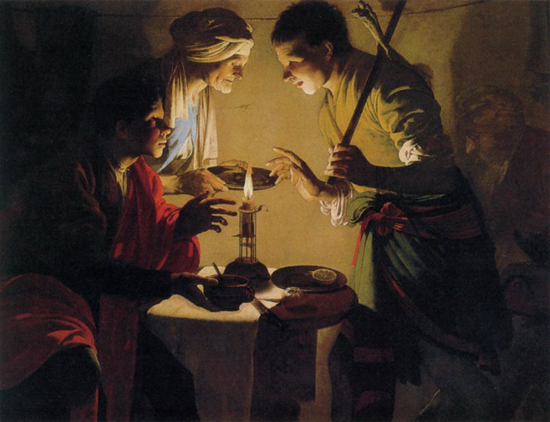 Jacob and Esau have become grown men. Esau is a very good hunter, a wild sort of man, who loves the outdoors. Jacob on the other hand, is more civilized and mature, preferring to stay within the home. Their father, Isaac, loved the taste of wild game and as a result, grew close to Esau. Similarly, Rebekah became closer to Jacob creating a family dynamic similar to many modern-day families with each parent gravitating towards one of the children (but of course, still loving all).

Jacob was cooking lentil stew when Esau arrived at the home. Esau was very hungry and asked Jacob for some of the stew. Without missing a beat, Jacob made Esau an offer. Esau would receive the stew he so desired in return for giving up his birthright to Jacob. Jokingly (or possibly not), Esau said his birthright was worthless if he were allowed to starve to death. Esau swore his birthright over to Jacob and in return, Jacob gave Esau some bread and stew.

As with other stories in the Bible, this story shows Jacob, the twin brother who was born grasping his older brother’s heel, as a schemer and manipulator. The story is told true, holding nothing back. Regardless of your feelings toward Jacob, there is an important lesson here, one that many modern-day societies should take careful note of.

Despite Jacob’s manipulative maneuver, Esau has only himself to blame for the outcome of their bargain. Esau took a short-term view of the situation. He sought instant gratification rather than considering the long-term effects of his immediate decision.

Esau’s grave mistake will be mentioned other times in the Bible, specifically as an example of shortsightedness. Seeking instant material gratification, bending to the whim of self-indulgence while ignoring long-term spiritual rewards, can lead to disaster.

This story, in its original translation, contains quite a bit of wordplay. For instance, the Hebrew word for “cook” used in this story sound very much like the Hebrew word for “hunter”. As a result, it appears as if the author is hinting, through wordplay, that the hunter has become the hunted.

Similarly, the Hebrew word for “food” used in the story is often translated to mean “animal feed”. This nuance depicts Esau in a negative light, portraying him as a hungry wild animal that has just been lured into a trap.

Finally, in the biblical verses, there is one seemingly out of place line that relates the phrase “red stew” as the reason Esau was also known as “Edom”. Indeed, Esau’s descendants would come to be known as Edom, as did the place where they dwelt, but in this sense, some biblical scholars have pointed out that Esau grasping for the “red stew” was used to convey the nature of Esau and his descendants. As we will soon see, they were a lusty, profane tribe of people.

This will not be the last time we witness Jacob’s manipulative ways. Later, Jacob will steal his brother’s blessing and even deprive his oldest son of his birthright too.

Seeing the story in a different light

his actions, he was open and honest with his offer to Esau. No deception was involved and Esau obviously made a very shortsighted mistake.

Some see Jacob as the hero in this story, one who recognized the spiritual value in a birthright and did what was necessary to remove it from the hands of a brother who the Bible will later call “godless”. As such, some scholars believe the author of the story intended it to be seen in this light too – not as a story of unfairness by Jacob but rather, as an act of stupidity by Esau.  In other words, if Esau’s equated the value of his birthright to a bowl of beans, by his actions, Esau demonstrated that he did not deserve to be the one who continued Abraham’s responsibilities and rewards under God’s covenant.

Removing the right by other means

Recognize that God gave Jacob the rights of the firstborn even though they were transferred at a human level. This story specifically tells us how the transfer of rights came about. Potentially, the rights could have been passed on in other ways had Jacob not taken matters into his own hands.

The importance of a birthright

A birthright is a right of first inheritance. Ancient law required the firstborn be the recipient of the first right of inheritance and receive at least twice the amount of possessions as the other sons. In addition, the birthright inherently assigned the role of the family priest too.

Beans in the eastern world

The pottage Jacob cooked was made with “lentils”, or small beans. Archaeologist have noted that the consumption of lentils (and preparation of “lentil paste”) was quite common in Egypt and Syria.

27 The boys grew up, and Esau became a skillful hunter, a man of the open country, while Jacob was content to stay at home among the tents. 28 Isaac, who had a taste for wild game, loved Esau, but Rebekah loved Jacob.

29 Once when Jacob was cooking some stew, Esau came in from the open country, famished. 30 He said to Jacob, “Quick, let me have some of that red stew! I’m famished!” (That is why he was also called Edom.)

33 But Jacob said, “Swear to me first.” So he swore an oath to him, selling his birthright to Jacob.

34 Then Jacob gave Esau some bread and some lentil stew. He ate and drank, and then got up and left.

So Esau despised his birthright.

27 The boys grew up. Esau became an expert hunter, an outdoorsman. Jacob was a quiet man preferring life indoors among the tents. 28 Isaac loved Esau because he loved his game, but Rebekah loved Jacob.

29 One day Jacob was cooking a stew. Esau came in from the field, starved. 30 Esau said to Jacob, “Give me some of that red stew—I’m starved!” That’s how he came to be called Edom (Red).

31 Jacob said, “Make me a trade: my stew for your rights as the firstborn.”

25:27 When the boys grew up, Esau became a skilled hunter, a man of the open fields, but Jacob was an even-tempered man, living in tents. 25:28 Isaac loved Esau because he had a taste for fresh game, but Rebekah loved Jacob.

25:29 Now Jacob cooked some stew, and when Esau came in from the open fields, he was famished. 25:30 So Esau said to Jacob, “Feed me some of the red stuff—yes, this red stuff—because I’m starving!” (That is why he was also called Edom.)

25:34 Then Jacob gave Esau some bread and lentil stew; Esau ate and drank, then got up and went out. So Esau despised his birthright.

27 And the boys grew: and Esau was a cunning hunter, a man of the field; and Jacob was a plain man, dwelling in tents. 28 And Isaac loved Esau, because he did eat of his venison: but Rebekah loved Jacob.

29 And Jacob sod pottage: and Esau came from the field, and he was faint: 30 And Esau said to Jacob, Feed me, I pray thee, with that same red pottage; for I am faint: therefore was his name called Edom. 31 And Jacob said, Sell me this day thy birthright. 32 And Esau said, Behold, I am at the point to die: and what profit shall this birthright do to me? 33 And Jacob said, Swear to me this day; and he sware unto him: and he sold his birthright unto Jacob. 34 Then Jacob gave Esau bread and pottage of lentiles; and he did eat and drink, and rose up, and went his way: thus Esau despised his birthright.