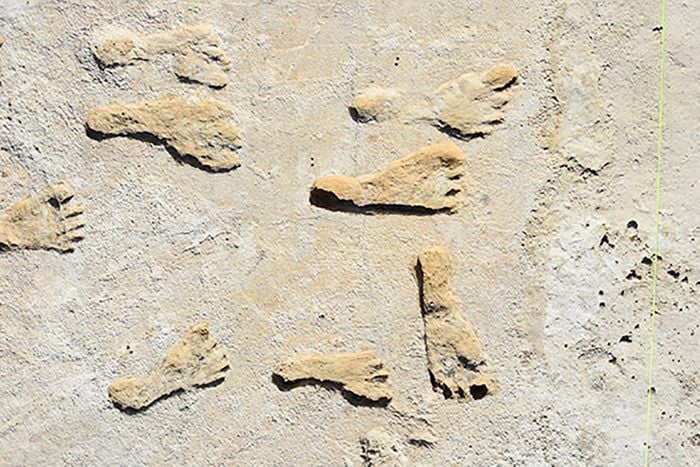 The philosophy of religion, science, and the dating of biblical events

Bible Blender has always honed on bible study tied to science, history, and common sense to show our holy Bible is not pie-in-the-sky fiction or legend, but a record of events as seen or passed down by our ancient ancestors. One aspect where religion and science tend to clash however, is the dating of biblical events. Scientists often assume events are much later than described in the Bible. Their belief rests on the evidence found to date.

At Bible Blender, we’ve always sided with the record in the Bible. If it contradicts science, our proposition is simple – science has simply not caught up yet. Yet another example of our premise shook the science world today when researchers announced humans have existed in North America far longer than anyone thought.

Tracks recently discovered in White Sands National Park in New Mexico are being dated about 10,000 years older and about 1,600 miles further south than any other human footprints known in America. These prints show that about 23,000 years ago, people walked barefoot across what was then a muddy lakefront in New Mexico, crossing paths with mammoths, giant ground sloths, and yes, dire wolves.

“It is, in my view, the first unequivocal evidence of human presence in the Americas. The footprints are inarguably human.”

The area of White Sands the footprints were found in was once a lush green plain near a giant body of water called Lake Otero. As the climate changed and the area became more arid, the water dried up leaving crystals of gypsum behind. Blowing winds broke down the crystals into the smaller crystals which eventually formed the sand dunes of White Sands.

For many decades, scientists have believed that humans arrived in America only 13,00 years ago by crossing an ice-free land bridge from Asia. They based this premise partly on footprints captured in mud, neglecting the fact that most ancient humans, like modern-day humans, probably avoided mud. This is borne out by the footprints scientists discovered in New Mexico – they were footprints of children and young adolescents. In addition, the footprints show that humans lived in the American Southwest at a time when massive ice sheets blocked the way for migrants from Asia to the New World.

“This definitely gives a really strong boost to the argument that humans were living in North America at this time, much earlier than previously thought.”

What the footprints in White Sand National Park tell us

The footprints were discovered in 61 human trackways preserved in seven layers of silt, clay and mud. The mud was interleaved with sediments containing seeds which allowed carbon dating to put the footprints at about 23,000 years old. The footprints represent 10 to 15 individuals and were laid down over a period of 2,000 years, mostly by children and adolescents.

The scientists also uncovered what they believe to be the footprints of a prehistoric woman who traveled for almost a mile with a toddler, sometimes carrying the child and sometimes making the young one walk by her side.