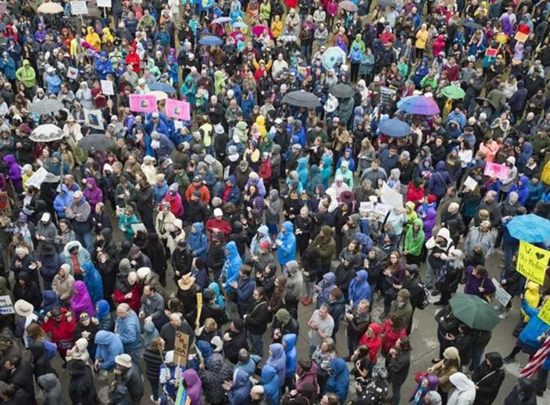 Kudos to the residents of Fort Collins, Colorado for their show of solidarity after a local mosque was vandalized in March 2017. A man used rocks to smash glass door panels at the Islamic Center of Fort Collins before entering the building and vandalizing the interior. Then to symbolize Christianity over Islam, he tossed a bible into the building.

The act offended more than just the local Islamic population. Hours after the incident, a local pastor interrupted his morning service to take his entire congregation to the mosque to show their support.  Around one thousand city residents took to the streets in a show of solidarity, many carrying signs quoting Christian bible verses (e.g. “Love they neighbor”) and slogans (e.g. “Not in our name”) emphasizing the hateful act ran contrary to Christian beliefs.

“I would say it’s evil and sinful and so we stand in solidarity with our Islamic brothers and sisters.”

In response, the Islam Center responded with this grateful message on its Facebook page:

“Thank you Fort Collins. What we have witnessed today by your presence and contact with our Center still exemplifies the City we have grown to know and love as citizens, residents, and visitors to Colorado and the United States.”

Three days after the crime, 35-year-old Joseph Scott Giaquinto was arrested and confessed to vandalizing the mosque. However, as of this writing, he has twice failed to appear for a court hearing in the case.