Faith tested – What if Jesus’ spectacular walking on water miracle was a trick? 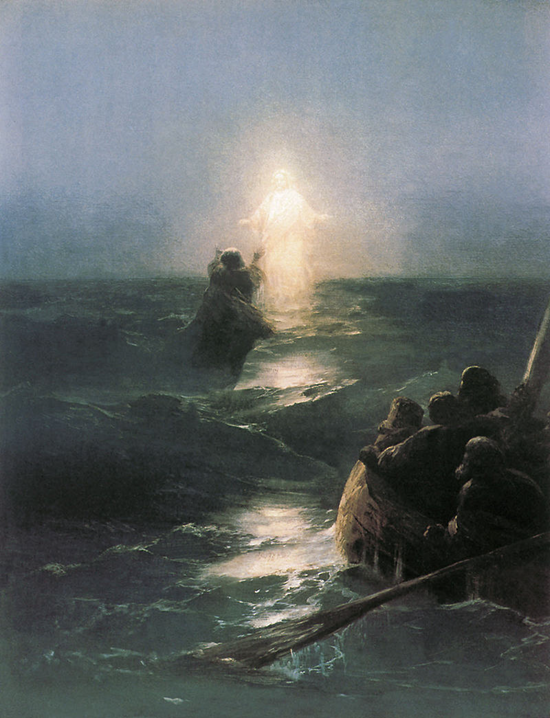 The scriptures tell us, after the feeding of the five thousand, Jesus instructed the disciples to get into a boat and cross to the other side of the Sea of Galilee. Jesus then dismissed the crowd of five thousand and went to a mountainside to pray by himself. Shortly before dawn, the disciples’ boat encountered a storm some considerable distance from land (John tells us they were about 3-4 miles from land). The disciples were afraid when they saw what they presumed was some sort of spirit approaching them on the stormy water. It was Jesus who was “walking on the lake”. The story is attested by Matthew, Mark, and John.

Non-believers will typically proffer the only possible earthly explanation for the event – that Jesus walked across a shallow area of the Sea of Galilee to reach the disciples on the ship. Others will claim that Jesus was nothing more than a mirage. Non-believer’s attempts come from a pointless grasp for a physical explanation to rationalize an event that occurred while an all-powerful God was present on earth.

There are several aspects of the story that make it impossible Jesus’ walk across the water was an act of deception. Shallow water? The water levels were not low enough to expose shallow land over which Jesus could have passed. The scriptures tell us the disciples’ boat was in the middle of the 141-foot deep sea – not close to shore (John’s version is more articulate and places the boat’s position at 3-4 miles from shore).

In addition, one of the disciples attempted to duplicate Jesus’ mind-boggling feat. Peter jumped from the boat and attempted to meet Jesus halfway. It’s clear that Peter would have made a beeline towards Jesus’ position. But Peter sank!

A mirage maybe? Jesus told the disciples to go ahead of him and cross the lake in the boat to get to Capernaum. Later in the story, we find that only a single boat was available on the near side of the Sea of Galilee. Clearly Jesus planned all along to walk across the lake rather than take a boat!

But what if the disciples lied?

Non-believers will argue that we only have the word of the disciples. They will propose that the disciples were a brain-washed cult of naïve followers that lied about Jesus’ miracles.

Each disciple could have lied – except their very character led them to be honest. And why would they lie? They were hated, treated badly, even martyred for their belief and with so many enemies throughout the land, it would be impossible they were not discovered and exposed as frauds if they had lied. Instead, non-believers in their day could only claim that Jesus had used “dark magic” to accomplish his miracles.

Finally, it’s important to recognize that not a single disciple withdrew their story or their account of the New Testament events. In any cult in history, inevitably some, and typically all the followers, will eventually withdraw their beliefs. This never happened with any of the twelve disciples nor the multitude of apostles that followed.

A second miracle marks a critical point in time

As expected, when the disciples saw Jesus moving across the waters, they were afraid. Mark tells us that Jesus was “about to pass by them”, continuing his stroll across the waters. But the disciples thought he was a “ghost”. In fact, they were so scared, the Bible tells us they “cried out” in fear. Jesus responded, telling them to be courageous, “It is I. Don’t be afraid!” He then stopped and climbed into the boat with the terrified travelers.

Walking on water was not the end of the miraculous event. The verses tell us that when Jesus climbed into the boat with them, the waters died down. It was a momentous moment for the disciples – seemingly the point in time when the disciples were fully convinced that Jesus was sent to earth by God.

The reason behind Jesus’ miracles

The story of Jesus’ walk on water continued well past the miraculous act itself. When the crowd of five thousand discovered Jesus on the other side of the Sea of Galilee, they were confused. They knew only a single boat had left the shores and Jesus had stayed behind. Jesus’ explained that the purpose of the miracle served the same purpose as all his miracles – to attest that the message he was delivering was from God.

“Very truly I tell you, you are looking for me, not because you saw the signs I performed but because you ate the loaves and had your fill. Do not work for food that spoils, but for food that endures to eternal life, which the Son of Man will give you. For on him God the Father has placed his seal of approval. The work of God is this – believe the one he sent.”

But it’s still hard to believe…

The purpose of Jesus’ miracles was to demonstrate, in person, before thousands of people, that the message he was delivering came from God. Clearly the growth and expansion of Christianity around the planet proves his message was accepted by early Christians with great fervor. However, in modern times, many have come to focus more on the Man who delivered the message rather than the message itself which states simply – that we are invited to believe in the gospel, make a dedicated effort to live our lives as Christians, and repent when we fall short. The Kingdom of God awaits those who succeed.