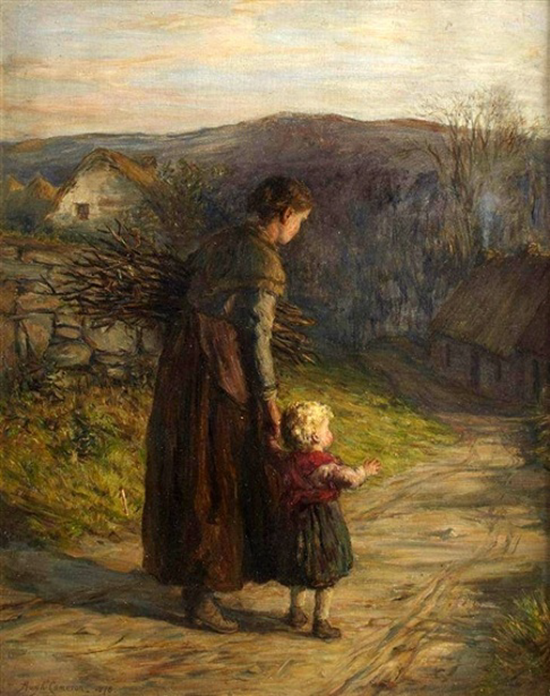 “And the king commanded Joab and Abishai and Ittai, saying, Deal gently for my sake with the young man, even with Absalom. And all the people heard when the king gave all the captains charge concerning Absalom.”  2 Samuel 18:5

Recently in my regular Bible reading I came to that tender appeal of King David to his generals as they were going forth to fight with Absalom: “Deal gently for my sake with the young man, even with Absalom:” (2 Sam. 18: 5), and my heart was touched with its likeness to Jesus.

Absalom was in rebellion against David the king, his father, and had driven him forth from his throne, had outraged his father’s marital ties, had sacrificed filial affection and trampled upon filial and civic duty, and was now seeking his father’s life. But David knew him only as his wayward boy, loved him still, and commanded his warriors to deal gently with him in the coming battle. He would have the rebellion crushed, but the rebel saved; the sin destroyed, but the sinner rescued.

How like Jesus that is! Is not that the way Jesus feels toward the most desperate backslider, the most careless sinner?

Does not His heart yearn over them with unutterable tenderness? And is not this written for our admonition? Does He not say to us, “Deal gently for My sake”?

The battle went against Absalom that day, and hard-hearted, willful, stubborn, old Joab slew him deliberately in spite of the king’s wish. And so it often is today. Joab’s tribe has increased, and while Jesus would have the backslider and sinner dealt with gently, Joab rises up and thrusts him through with reproaches and bitter words and sharp looks, slays him utterly, and the heart of Jesus is broken afresh, as was the heart of David. The elder brother, with his ungenerous jealousy and cruel words and hardness of heart, as surely grieved the loving old father as did the prodigal with his riotous living.

There are many reasons why we should deal gently.

1. That we may be like Jesus. When Peter denied Jesus and cursed and swore, Jesus loved him still, and turned and gave him a tender look that broke his heart, and he went out and wept bitterly. And after the resurrection Jesus did not rebuke and reproach Peter, but tenderly asked him, “Lovest thou Me?” and then commissioned him to feed His lambs and sheep.

Should we, then, who at our best are only “sinners saved by grace,” despise the example of our Lord and deal roughly with His sheep that have gone astray? Since He has freely forgiven us our ten thousand talents, shall we not forgive our brother a hundred pence? (Matt. 18: 23-35.)

2. We should deal gently with them lest we ourselves grieve the Spirit and become backsliders. Paul wrote to the brethren in Galatia, saying, “Brethren, if a man be overtaken in a fault, ye which are spiritual restore such an one in the spirit of meekness, considering thyself, lest thou also be tempted.” (Gal. 6: i.) I have noticed that when professing Christians bear hard upon backsliders it is usually only a question of time when they themselves shall backslide. In fact, it is pretty certain that they are already backsliders in heart. In the very act of killing the rebellious Absalom Joab himself rebelled against the expressed wish and command of his king, though he did it under the cloak of loyalty.

And so men to-day who are severe in their dealings with sinners and backsliders under the cloak of zeal for righteousness and loyalty to truth are themselves rebelling against the example and spirit of Jesus, and unless they repent, the world shall surely soon witness their fall.

I have in mind now two prominent religious leaders who were unsparing in their criticisms and judgment against a notorious backslider until their spirit became as surely un-Christlike as was his in spite of their loud professions and fair outward appearance. At last one of them fell through gross immorality and the other was caught in the same snare, and practically followed in the footsteps of the man he had so fiercely condemned. “Let him that thinketh he standeth take heed” to his way and spirit in dealing with those who are away from Jesus, “lest he fall.” We can only save ourselves as we keep the sweet spirit that impels us to “deal gently” for Jesus’ sake.

3. We should deal gently that we may save the backslider. Jesus loves him still, is married to him, seeks him continually and waits to forgive him and cleanse him and restore to him the joy of salvation the moment he returns, and we must not hinder, but help. But we shall not do so unless we deal gently. Harsh dealing would not win us, nor will it win him.

Paul wrote to Timothy, “The servant of the Lord must not strive, but be gentle toward all men, apt to teach, patient; in meekness instructing those that oppose themselves, if God peradventure will give them repentance to the acknowledging of the truth; and that they may recover themselves out of the snare of the devil.” (2 Tim. 2: 24-26.) But this gentleness is not inconsistent with great firmness and unswerving loyalty to the truth. In fact it is only when it is combined with these sturdy virtues that it commends itself to the judgment and conscience of the wrongdoer, and is likely to really win him from- the error of his ways.

Firmness of manner may unite with great gentleness of spirit. I may be as tender in spirit in warning and commanding my child to beware of the fire, as I am in soothing him after he is burned.

While harshness and severity will only harden the wanderer from God on the one hand, a gospel of gush will fill him with indifference or contempt on the other. The soul-winner, then, must not have the hardness and brittleness of glass or cast iron, nor the malleability of wrought iron or putty, but rather the strength and flexibility of finest steel that will bend but never break, that will yield and yet retain its own form.

It is generally true that holy mothers have more influence with and win more wilful boys and girls than do the fathers, not because the mothers are more ready to compromise principle and sacrifice truth, but rather because while unwavering in their fidelity to righteousness, they mingle mercy with judgment and a passion of gentle, unfailing love and tenderest solicitude with firmness and loyalty to the claims of God’s perfect and holy law.

But how shall one who has not this spirit of perfect gentleness secure it? There is but one way. It is a fruit of the Spirit, and is to be had only down at Jesus’ feet. Jesus is like a “lamb slain,” mutely gentle, and yet again He is “the Lion of the tribe of Judah” — firm and strong. He combines the strength of the lion with the gentleness of the lamb.

You, then, that would have His Spirit, confess wherein you have it not. Are you hard, harsh, critical, severe and unrelenting? Tell Him and ask Him to destroy this carnal mind and give you His mind. (Phil. 2: 5.) And as you ask, believe. “All things are possible to him that believeth.”

To maintain this spirit you must walk in the footsteps of Jesus and feed on His words. Only to those who seek Him day by day with the whole heart, and that with joy, is it given to be like Him in these heavenly tempers and dispositions.

“Let this mind be in you which was also in Christ Jesus.” Amen !