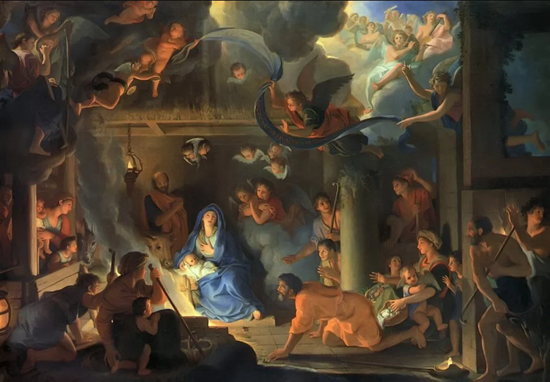 “And it came to pass, as the angels were gone away from them into heaven, the shepherds said one to another; Let us now go even unto Bethlehem, and see this thing which is come to pass, which the Lord hath made known unto us.” Luke 2:15

There is only one object that can satisfy the eye of the mind. That object is Jesus—Son of man without sin; Son of God with power.

Simeon, having waited long for “the consolation of Israel,” seeing the Christ who in eternity rested motherless upon the Father’s bosom and in time rest­ed fatherless upon a woman’s bosom, clasping the Ancient of Days who had become the In­fant of Days, said, “For mine eyes have seen thy salvation.”

Would that such satisfaction would possess our hearts through the eyes of our minds—as we turn our eyes away “from be­holding vanity.”

Let us turn our mind’s eye upon Bethlehem.

Bethlehem! Jerusalem— the city of thousands of national memories—glorious and guilty, with evil, girt with diadem inside her walls. Not Athens—the intel­lectual center of the world. Not illustrious Rome—festering on the soil of war. But Bethlehem— called by some “a weed patch ignored by world travelers”—a small village in which nothing had occurred to aggrandize it.

Bethlehem, drawing a new star to lighten, its obscurity, drawing sages from the East, drawing the angel of the Lord, drawing of the heavenly hosts a multitude— remembered in all generations. “Thou Bethlehem Ephrata, though thou be little among the thousands of Judah, yet out of thee shall he come forth unto me that is to be ruler in Israel”

“Shepherds.. Keeping watch over their flock.”—Luke 2:8.

These shepherds—poor, hon­est, industrious—were not lead­ers of armies, not expounders of philosophies, not advocates of political theories, not bankers, counting piles of money—rather just throwers of stones to keep the wolves away. Watchers of their flocks, to these who were dutifully diligent in their com­mon tasks, the good news was first announced—teaching us to be “diligent in… .business”—urg­ing us to remember that our modest work and the hero’s sac­rifice are one in the unseen realm of duty, showing a woman’s two mites and a rich man’s great gifts are the same in the realm of love, showing that God seeks people in humble places for serv­ice and the honors of service.

As we look upon Bethlehem, let us see to it that this diligence possesses us.

Give ear to the Divine Declaration

To Joseph “the angel of the Lord appeared.. .saying.’. .fear not to take unto thee Mary thy wife.. . she shall bring forth a son, and thou shalt call his name Jesus: for he shall save his people from their sins” (Matt. 1:20, 21).

To these same shepherds a multitude from the heavenly choir sang, “Glory to God in the highest, and on earth peace, good will toward men” (Luke 2:14).

Had they made a declaration that poverty, war, plague and disease would be forever banished from the earth, such announcement would have been as discord to melody, as the chatterings of nonsense to the speakings of wisdom, when put in the light of this divine declaration.

But we should see the Deep Descent

In Bethlehem, humility and glory in their extremes were joined. Born in a stable. Cradled in a cattle trough. Wrapped in. swaddling clothes of poverty. No room for Him who made all rooms! No place for Him who made and knows all places! Oh, deep humiliation of the Creator—born of the creature, woman! But His descent was the dawn of mercy. Because we cannot ascend to Him, He descends to us.

Forget not the Delayless Doing

The wise men made the same improvement of their information. In a distant country they saw His star and followed its direction—defiant of all distances, discouraged by no vast expanse, downcast by no far reach of miles.

“Let us now go.” What—at midnight? Coot and calculating reason would have argued that it was an unreasonable hour. Had covetousness spoken, it would have asked questions as to the welfare of the sheep. Had procrastination prevailed, it would have put off until “a ‘better time.” But these plain men, who had left their beds to attend their flocks, now left their flocks to inquire about the Savior. “They came with haste.”

“But when the fullness of the time was come, God sent forth his Son, made of a woman, made under the law, To redeem them that were under the law, that we might receive the adoption of sons. “—Gal. 4:4,5.

Necessary it was to our redemption that the Savior of men should be a man. But had Christ been produced in the ordinary way of human generation, He must have been a partaker of a sinful nature. This was prevented by the miraculous way of His conception—by the power of the Holy Spirit. Thus the virgin-born Christ Was “holy, harmless, undefiled, separate from sinners”—fit to become sin for us because He knew no sin.

Jesus is God manifest in the flesh. Let us go to Bethlehem and see this great sight. Glorious mystery. We cannot fully comprehend it. Men may speak and write of it, but as they attempt to describe it, a woeful sense of inadequacy oppresses the mind. We may speak of it, but the most we can say is that it is unspeakable. And the most we know is that it

Think too of the

When Jesus came it was night in Egypt, night in Rome, night in Athens, night in Syria, night in Palestine—night everywhere. Darkness blacker than “a murderer’s mark of crepe.” Darkness, as Keats would say, like “the parentage of chaos.” The world was dark “as if it were dipped in the death shadow.”

Poe spoke of the darkness “as the caves wherein earth’s thunders groan”—and it was groaning “ever darker and darker like the shadow of advancing Death.” Thomas spoke of a condition “Dark as the inside of a whale,” and Whittier, of a matter “dark as the brooding thundercloud?”

The world was, as Milton described Samson, “dark, dark, dark, amid the blaze of noon.”

Yes, deplorable darkness had long covered the earth—and the wisest of men bowed “to they unknown God.”

But, glory to His name, “the only begotten Don, which is in the bosom of the Father, he hath declared him” (John 1:18). This is He who is “the brightness of his [the Father’s] glory, and the express image of his person” (Heb. 1:3); “the image of the invisible God” (Col. 1:15). This too is unspeakable, but we believe and adore. Let but the light shine into our heart to give us “the light of the knowledge of the glory of God in the face of Jesus Christ,” and it is enough.

But consider as to Christ the

There is something so sublime, so delightful in the name Saviour. Cicero, the Roman ora­tor, said that when traveling in Greece he saw a pillar inscribed with the word Saviour. He ad­mired the fullness in the name, but he was as ignorant of its Christian meaning as an owl is of astronomy. How much more may every redeemed sinner ad­mire that name—Saviour!

But, seeing the things come to pass at Bethlehem, let us hate the

What mean I by that? As, at Bethlehem, we see God in all His glorious perfections manifested in the Person of Jesus, we should engage our souls to adore and love and praise Him—magnifying “the Lord God of Israel” “The Lord.. .hath visited and redeemed his people.”

But we see the disgraceful way in which some celebrate the season called Christmas. Vain, frothy, carnal—these three words—can be written over the celebrative ways of those who “make merry” at the Christmas season. Foolishly, even iniquitously, do they contradict as much as possible the design of His coming as the “Infant of Days” to Bethlehem.

Jesus came to save His people from their sins—not to urge them to participate in them. Why should more sins be committed at the Christmas season in a few days than in many weeks at other times? Why should sin be aggravated by letting it pass under the guise of religious joy? Why should many choose to “steal the livery of Christmas to serve the Devil in”?

Such disgraceful observance of the birth of Christ is an affront to a holy God, a reproach to the Christian name, a ruinous matter to the souls of men. Riotous revelry of reverence and worship and gratitude is of Hell—not Heaven; of man—not God.