Home » History » You are reading »

Complete (but concise) list of minor tribes (clans, descendants, or other groups of people) in the Bible 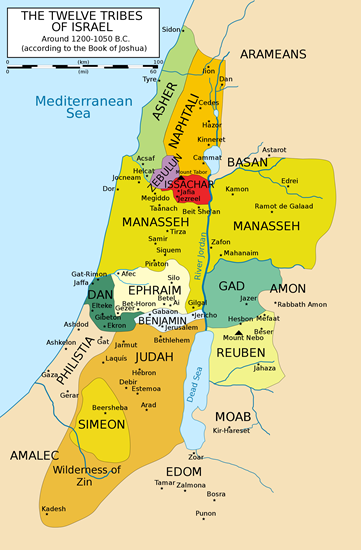 This list contains tribes or other groups of people named in the Bible of minor notability, about whom either nothing or very little is known, aside from any family connections.

Ahumai – A clan within the Tribe of Judah. The name “Ahuman” appears only in one verse of the Hebrew Bible.  Greek Septuagint manuscripts read Acheimei, Achimai or Achiman.

Apharsachites – A group of the colonists whom the Assyrian king placed in Samaria.

Apharsathchites – One of the tribes who wrote a letter to the Persian emperor in opposition to the rebuilding of Jerusalem. The exact spelling “Apharsathchites” occurs only in Ezra 4:9. However, an alternate form of the same name, “Apharsachites,” appears in Ezra 5:6 and 6:6.

Apharsites – One of the tribes removed to Samaria by Asnappar of Assyria, or perhaps the same as the Apharsachites mentioned above (Ezra 4:9).

Arkites – Arkites, also Archites were descendants of Canaan. David’s friend Hushai was an Arkite (2 Samuel 15:32). The Arkites inhabited Arqa (Arka), a city in the north of what is now Lebanon.

Arvadites – Arvadites were descendants of Canaan, according to Genesis 10:18 and 1 Chronicles 1:16. They inhabited Arvad/Arwad, an island city off the coast of Syria some 30 miles.  The island was only about 80 feet long by 500 feet wide and surrounded by a massive wall and artificial harbor.  Its navy was notable and mentioned in Egyptian and Assyrian monuments.

Ashurites – The Ashurites (also called Asshurites or Asshurim) are a group of people who, according to Genesis 25:3, descended from Dedad, the son of Jokshan, the son of Abraham. They were included in the short-lived kingdom of Ish-bosheth, Saul’s son.

Chemarims – Mentioned in Zephaniah 1:4 as people to be punished by God for their associations with idolatry. In some translations the noun is treated as a common noun meaning “idolatrous priests” or something similar. Some modern scholars believe the verbal form means “to be black” implying their priests wore black robes instead of traditional white.

Cheran – A Horite clan in Genesis 36:28 and 1 Chronicles 1:41 occurring in the genealogy of Seir, the Horite.  It is believed to be related to the word “lamb” implying shepherds.

Darkon – In Ezra 2:56 and Nehemiah 7:58, which both reproduce versions of the same list, the bene darkon (“sons” i.e. “descendants” of Darkon) appear as one of the groups of the “descendants of Solomon’s servants” said to have returned from the Babylonian captivity to Jerusalem and Judah.

Dishon – A Horite clan name appearing in 1 Chronicles 1 and Genesis 36. The passages involved are about the relations between Horite clans, but they are written as though the subject matter was the genealogical relationships between individuals, one of them named “Dishon.”  Dishon is described two times as the fifth son of Seir, but one time he is described as the grandson of Seir (i.e. as the son of Anah).

Eleadah – A clan in the tribe of Ephraim (whose father and son are both named Tabath).  The name means “God has adorned”.

Elkoshites – Appearing only in Nahum 1:1, where the prophet is called “Nahum the Elkoshite.” Possibly denotes a inhabitant of Alkush located on the east bank of the Tigris or Elkosh located between Ramieh and Bint Jebeil.

Elmadam – Mentioned in Luke, an ancestor of Jesus (in the 6th generation before Zerubbabel). Where the Greek has Elmadam, the Peshitta has Elmodad.

Gammadim – A group or class of people mentioned only in Ezekiel 27:11 in the form “Gammadims” or “Gammadim.  Described as defenders of Tyre.  Name means “valorous men”.

Garmites – A term that appears in passing only once in the Masoretic Text of the Hebrew Bible, in a genealogical passage which mentions a member of the Tribe of Judah referred to as “Keilah the Garmite”.

Gazzam – Head of a family of Nethinim mentioned in Ezra 2:48 and Nehemiah 7:51.  Both instances are in copies of a list of people who returned from the Babylonian captivity to Yehud Medinata.

Girgashites – Descendants of Canaan, according to Genesis 10:16 and 1 Chronicles 1:14, and inhabitants of the land of Canaan, according to Genesis 15:21, Deuteronomy 7:1, Joshua 3:10, 24:11, and Nehemiah 9:8.  At times, they are not listed along with the other Canaanite tribes inhabiting the Holy Land; according to some, such as Rashi, possibly because they left the Land of Israel before the Israelites returned from Egypt.  Various mentions of similar names appear in Egyptian inscriptions but their true identity remains unknown.

Hagab – Name means “grasshopper”. They are listed as ancestors of some of the Nethinim (temple servants) who returned to Jerusalem from the Babylonian captivity. The Greek Septuagint manuscripts of Ezra and Nehemiah record the name as Agab or Gaba.

Hamathites – Descendants of Canaan, they inhabited the Kingdom of Hamath, located in what is now western Syria and northern Lebanon.

Harhur – The collective name of a group of Nethinim (temple servants) who returned to Judah after the Babylonian captivity. The phrase can be translated as “sons of Harhur,” which can be interpreted as “descendants of Harhur” or “people from Harhur.”  Name means “free-born” or “fever”.

Hashum – A clan listed as exiles returning to Jerusalem from the Babylonian captivity. The Book of Ezra records that 233 members of this group returned to Jerusalem and describes them as among those who married foreign wives.

Hatita – A family of porters in Ezra–Nehemiah’s list of people who returned to Yehud Medinata after the Babylonian exile.

Horonites – In the Book of Nehemiah, one of Nehemiah’s enemies is called Sanballat the Horonite. Scholars have disagreed as to whether this identifies Sanballat as hailing from Beth-horon (in Samaria) or from Horonaim (in Moab).

Ishbah – A member of the tribe of Judah, father of Eshtemoa.

Jahmai – A clan in the Tribe of Issachar, mentioned only in 1 Chronicles 7:2. Name may mean “may Jeh protect!”

Jakim – A Priestly division. In the time of David a systematic plan was created, in which priests were divided into twenty-four courses, which were responsible on a rotating basis for carrying out duties related to the temple at Jerusalem. Jakim is listed as the twelfth of 24 priestly courses.

Japhlet – A clan in the Tribe of Asher. Name means “he escapes”.

Japhletites – A community referred to in Joshua 16:3.  They were located at the western point of the boundary of the land allocated to the tribe of Ephraim in the lots drawn by Joshua and Eleazar.

Lahad – A clan within the Tribe of Judah.

Lehabim – A people descended from Mizraim. Exact identity is unknown, but the name could refer to Libyans.

Maacathites – Described as people of Maacah.

Magbish – A group of 156 people listed in Ezra 2:30 as returning from the Babylonian captivity with Zerubbabel. This group is absent from the parallel list in Nehemiah 7.

Malchielites – A group within the Tribe of Asher who were descended from Asher’s grandson Malchiel.

Manahathites – A group mentioned in 1 Chronicles 2:52 and 54, in a genealogical passage about the descendants of Caleb of the Tribe of Judah. Name is related to the Manahath son of Shobal the Horite.

Maon – A people who, along with the Sidonians and Amalek, oppressed the people of Israel. There is also a location known as Maon mentioned several times in the Bible, but the people by that name are mentioned nowhere but the passage in Judges.

Meunim – A Philistine peoples conquered by king Uzziah. Also mentioned in the Bible among groups of Nethinim returning to Yehud Medinata following the end of the Babylonian captivity.

Mezobaites – Mentioned only in 1 Chronicles 2:53, a clan that lived in Kirjath-jearim after the Babylonian captivity.

Naphtuhim – A people descended from Mizraim.

Nephisim – Sons of Nephisim (Nephusim, Nephishesim, Nephushesim) were, according to the books of Ezra and Nehemiah, one of the groups of Nethinim. The Qere and Ketiv system for recording variants gives the forms “Nephisim” and “Nephusim” in Ezra 2:50, and “Nephishesim” and “Nephushesim” in Nehemiah 7:52. These forms appear in two forms of a list of people brought by Ezra from the exile in Babylonia to their homeland in Yehud Medinata.

Neziah – Sons of Neziah, according to Ezra 2:54 and Nehemiah 7:56, a group of people who, among others, returned with Ezra from the Babylonian captivity.

Padon – The sons of Padon (Hebrew bnei Padon) are a group who appear in two versions of the list of returnees to Judah according to the books of Ezra (2:44) and Nehemiah (7:47). In keeping with other Hebrew names of the form bnei X, the bnei Padon might be translated as descendants of Padon, sons of Padon, or people of Padon.

Paltites – Appears in the Bible once as “Helez the Paltite” (2 Samuel 23:26), one of David’s Mighty Warriors. The name might either identify him as coming from the location Beth Pelet (Hebrew for “House of Pelet”), or may identify him as a member of the clan named Pelet, identified with Caleb in 1 Chronicles 2:47.[46]

Parosh – Mentioned several times in the Books of Ezra and Nehemiah (Ezra 2:3; 8:3; 10:25; Nehemiah 7:8). As with other Hebrew terms of the form bnei X, the bnei Parosh might be translated as descendants of Parosh, sons of Parosh, or people of Parosh. A person by the name of Pedaiah, described as a “son of Parosh” appears in Nehemiah 3:25, is listed among those who helped rebuild the wall of Jerusalem. A mention of the name “Parosh” also appears in Nehemiah 10:14.

Pelonites – Two individuals are identified by the term “Pelonite” in the Hebrew Bible: Ahijah the Pelonite and Helez the Pelonite, both found in the Chronicles versions of the list of David’s Mighty Warriors (1 Chronicles 11:27, 36; 27:10).

Perida – A group of Solomon’s servants in Nehemiah 7:57. The name appears as Peruda in Ezra 2:55.

Punites – A clan descended from Puah, in the Tribe of Issachar.

Reaiah – Described as the “son of Shobal”, associated with Zorathite clans of the Tribe of Judah.  In Ezra-Nehemiah, a group known as the “sons of Reaiah” appear in two versions of a list of clans of the Nethinim (Ezra 2:47, Nehemiah 7:50).

Sardites – A clan within the tribe of Zebulun, named after Zebulun’s son Sered.

Senaah – Documented as returnees from the Babylonian captivity. According to Ezra 2:35 there were 3,630 members of this group; Nehemiah 7:38 gives the figure 3,930.

Shaalbonites – The term Shaalbonite is mentioned in passing in two biblical passages, both of which list an “Eliahba the Shaalbonite” as one of David’s Mighty Warriors (2 Samuel 23:32, 1 Chronicles 11:33).

Sinites – A people descended from Canaan, son of Ham, according to Genesis 10:17 and 1 Chronicles 1:15. Most authorities however consider the identity of Sinites uncertain, but that they are possibly a people from the northern part of Lebanon where there are various localities with similar names, such as Sinna, Sinum or Sini, and Syn.

Solomon’s servants – A group called the descendants of Solomon’s servants appears in Ezra and Nehemiah.  They appear in Ezra 2 (55-58) in a list of returnees from the Babylonian captivity to Yehud Medinata. They are listed after the Nethinim and before a list of returnees who could not prove their genealogical origins.  Nehemiah 11:3 lists them as one of the five classes of persons living in Yehud Medinata: “Israel, the priests, the Levites, the Nethinim, and the descendants of Solomon’s servants.”

Zemarites – Descendants of Canaan, according to Genesis 10:18 and 1 Chronicles 1:16. They inhabited Sumur, a city near the coast of present-day Syria.

Rom 8:28: And we know that in all things God works for the good of those who love him, who have been called according to his purpose.