Jesus demonstrates his authority over nature by calming a furious storm on the Sea of Galilee (Matthew 8:23 – 8:27) 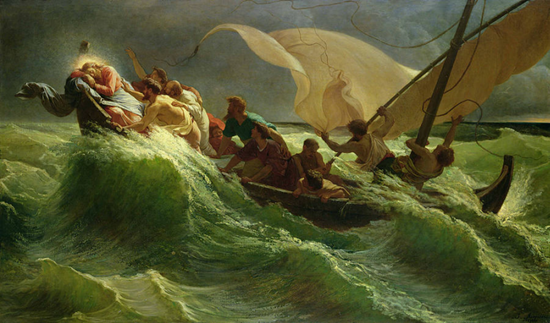 To escape the crowd and cross to the other side of the Sea of Galilee, Jesus and his disciples boarded a boat. As they travelled across the lake, a furious storm erupted. The wind was so great, waves swept over the boat. Jesus however, calmly slept through the squall.

The disciples woke Jesus shouting, “Lord, save us! We are going to drown!”

Jesus replied, “You of little faith, why are you so afraid?”

Then Jesus rose and rebuked the winds and waves. The sea became completely calm.

The disciples were amazed and asked, “What kind of man is this? Even the winds and the waves obey him!”

As we strive to mimic Jesus’ behavior, note that he showed no fear (he took the time to rebuke the disciples before he rebuked the dangerous storm) and with supreme confidence and iron-clad faith, used sublime words of command to take control of the storm.

Irrational fear is an unnecessary emotion (for most situations) that should never be allowed to control our mind, spirit, or body. When we fear, it shows lack of faith – and lack of faith promotes fear. By acknowledging our wellbeing does not vary with life’s random circumstances but rather, is rooted in our faith in God, we can lead more productive and enjoyable lives.

Another miraculous event witnessed by dozens of people

The verses tell us the “disciples” were with Jesus on his trip across the sea so at least the twelve were present, if not more. Luke adds that there were other boats travelling with them. Likely dozens of people witnessed Jesus’ miraculous act, many of them expert seamen comfortable with the sudden violent storms common on the Sea of Galilee.

Events such as this contributed to Jesus’ popularity and renown which of course, helped promote the rise of Christianity. It is believed that several thousand people, if not tens of thousands, witnessed Jesus’ miracles including more than 500 who witnessed his resurrection.

What kind of man is this?

Jesus’ control of the elements amazed the witnesses who asked, “What kind of man is this?” It’s a question Christians still grapple with today. Were Jesus’ miracles manifested by God, empowered by God, or something in between? Beliefs vary between various Christian sects.

Regardless of your belief, as the disciples saw, Jesus was indeed supernatural, the likes of which the world had never seen before. Jesus’ control over the sea was in one way or another, attributed to God.

Violent squalls on the Sea of Galilee

Sudden squalls on the Sea of Galilee are common. The topography of the area makes it conducive to violent high-wind storms. The body of the lake lies in a deep basin about 680 feet below sea level (it is the lowest freshwater lake on the planet). With mountain ranges on the east and hills gashed with deep, windy gorges converging to the head of the lake, the chasms act like funnels, drawing down cold winds from the mountains. It is not uncommon on the lake for violent storms to come down quickly, without warning.

The “boat” Jesus used to cross the Sea of Galilee

The word translated to “boat” is “ploion” and can represent a vessel of practically any size. The boat Jesus and the disciples used was likely a fishing boat (common in the area) and would have been large enough for several crewmen (and a large bounty of fish).

23 Then he got into the boat and his disciples followed him. 24 Suddenly a furious storm came up on the lake, so that the waves swept over the boat. But Jesus was sleeping. 25 The disciples went and woke him, saying, “Lord, save us! We’re going to drown!”

26 He replied, “You of little faith, why are you so afraid?” Then he got up and rebuked the winds and the waves, and it was completely calm.

27 The men were amazed and asked, “What kind of man is this? Even the winds and the waves obey him!”

23–25 Then he got in the boat, his disciples with him. The next thing they knew, they were in a severe storm. Waves were crashing into the boat—and he was sound asleep! They roused him, pleading, “Master, save us! We’re going down!”

26 Jesus reprimanded them. “Why are you such cowards, such faint-hearts?” Then he stood up and told the wind to be silent, the sea to quiet down: “Silence!” The sea became smooth as glass.

27 The men rubbed their eyes, astonished. “What’s going on here? Wind and sea come to heel at his command!”

8:23 As he got into the boat, his disciples followed him. 8:24 And a great storm developed on the sea so that the waves began to swamp the boat. But he was asleep. 8:25 So they came and woke him up saying, “Lord, save us! We are about to die!” 8:26 But he said to them, “Why are you cowardly, you people of little faith?” Then he got up and rebuked the winds and the sea, and it was dead calm. 8:27 And the men were amazed and said, “What sort of person is this? Even the winds and the sea obey him!”

23 And when he was entered into a ship, his disciples followed him. 24 And, behold, there arose a great tempest in the sea, insomuch that the ship was covered with the waves: but he was asleep. 25 And his disciples came to him, and awoke him, saying, Lord, save us: we perish. 26 And he saith unto them, Why are ye fearful, O ye of little faith? Then he arose, and rebuked the winds and the sea; and there was a great calm. 27 But the men marvelled, saying, What manner of man is this, that even the winds and the sea obey him!