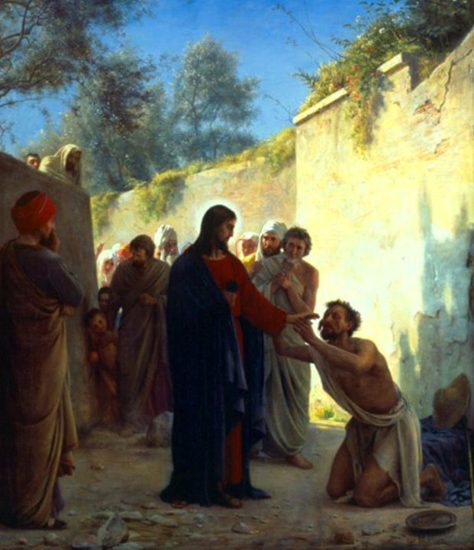 After Jesus completed his Sermon on the Mount, he came down from the mountainside. Large crowds of people followed him (recall that prior verses tell us the people were “astonished” at his teachings).

A man with leprosy approached Jesus and knelt before him. He said, “Lord, if you are willing, you can make me clean again.”

Jesus reached out his hand and touched the man saying, “I am willing. Be clean!”

Immediately the man was cleansed of his leprosy.

Then Jesus said to him, “Do not tell anyone what I have done. Just go present yourself to the priests so they may pronounce you clean.”

Jesus goes above and beyond to help a man in need

Jesus’ healing of the leper is one of the most recognized and talked-about of Jesus’ miraculous acts. It is especially touching given the social status of lepers in Jesus’ day. Lepers were outcasts of society, forced to live apart from others.

Yet Jesus did not avoid the leper or turn him away. On the contrary, he touches him, an act that at the very least introduced risk of infection and marked him as ceremoniously unclean. Onlookers likely saw Jesus as brave, without fear, and possessing a tremendous amount of confidence and faith that he would not be infected.

The story could have ended here and remained emotionally significant, yet Jesus goes further. He does not accept glory nor public accolades – he was humble. He told the man to tell nobody what he had done. He gave freely, to someone who most would have crossed the street to avoid, and asked for nothing in return.

Although in our modern day, we may lack faith to perform miracles as Jesus did, we can still give to others on a daily basis through acts of kindness, compassion, and generosity (whether they “deserve it” or not), and ask for nothing in return. This is truly what it means to be a Christian.

The Bible tells us that after the Sermon on the Mount, the listeners were astonished at his doctrine. Thus, it is not surprising that hordes of people began following him. Recognize that this massive following of people was prophesized in Jacob when he said, “Unto him shall the gathering of the people be.”

If the thought of Jesus touching a leper seems horrifying – it did to the people in ancient times too. In fact, Jesus’ touch would have rendered him ceremonially unclean requiring a well-documented process to be deemed “clean” again. To touch the leper as Jesus did, was no small feat.

Why Jesus told the leper to keep the healing a secret

Jesus was not only modest, but thoughtful too. It is likely that Jesus told the leper to keep silent in order to keep the public’s focus on the lessons he was teaching and not on his miraculous acts of healing. It is interesting to note that in Mark’s account of this event, we find that the leper did tell others of Jesus’ act.

It is worthy to note that the leper never asked if Jesus was capable of healing him. He seemed to approach Jesus with all confidence that Jesus could heal his condition. That he even approached Jesus, in public, with a contagious condition that required (legally) he be isolated from others, demonstrates he knew with all his heart that Jesus *could* heal him. With no doubt in his mind, the leper stated simply, “Thou canst.” The only question in the leper’s mind was whether or not Jesus would be willing to do it (which of course, he was).

How quickly was the leper healed?

Mathew and all New Testament writers agree that the healing was instantaneous. As soon as Jesus had spoken, the man was healed.

The leper lifestyle in ancient times

The Greek word for leprosy covers a wider variety of conditions than our modern-day meaning. In fact, any type of deep, infectious, and probably incurable, skin disease would have been called leprosy (including of course, Hansen’s disease).

The Bible tells us that symptoms of the condition ranged from white patches on the skin, sores, and loss of fingers and toes. Lepers in ancient days were ostracized from society until they were deemed cured by the priests. They were required to leave the camp and cry out “Unclean, unclean!” if anyone approached them. In fact, Pharisees deemed that if a person came within “six feet of a leper on a windless day”, they were defiled and must go through the prescribed ceremony for ritual cleansing.

To be declared clean again (cured), the leper must go to the priest. The priest would ceremoniously clean the leper’s clothes and shave their hair. Then if the leper’s skin condition appeared cured, they would be pronounced “clean” and could reenter society. This practice of course, kept contagious disease from infecting others and spreading through the camp.

What was the biblical disease called leprosy and where did it go?

The bacteria that cause leprosy, also called Hansen’s Disease, can live in the human body for up to 20 years without any physical symptoms. But eventually the infection causes severe pain, nerve damage and often a crippling loss of bodily tissue.  Today, leprosy can be treated by antibiotics but in ancient times, it was considered incurable.  In 2013, Science magazine published a study conducted by Ecole Polytechnique Federale de Lausanne in which a team of biologists and archaeologists probed the mass graves of a 600-year-old leper colony for traces of ancient leprosy DNA (a decayed tooth provided the best DNA sample).  They found that ancient leprosy was nearly identical to modern-day leprosy.

The finding was important because leprosy seems to have virtually disappeared from Europe by the turn of the 16th century.  If the bacteria did not change, then people most likely did.  It is now believed that a certain gene makes some people highly resistant to leprosy and sometime after the Middle Ages, we evolved to incorporate this gene in our makeup.

Often times when leprosy is mentioned in the Bible, it could be translated more accurately as “skin disease”. Today we do not know precisely which skin disease biblical writers were referring to and possibly, “leprosy” was meant to include various types of skin diseases. However, a description is given in Leviticus in which the writer notes deep, shiny wounds which in fact, could have been Hansen’s disease.

When Jesus came down from the mountainside, large crowds followed him. 2 A man with leprosy l came and knelt before him and said, “Lord, if you are willing, you can make me clean.”

3 Jesus reached out his hand and touched the man. “I am willing,” he said. “Be clean!” Immediately he was cleansed of his leprosy. 4 Then Jesus said to him, “See that you don’t tell anyone. But go, show yourself to the priest and offer the gift Moses commanded, as a testimony to them.”

Jesus came down the mountain with the cheers of the crowd still ringing in his ears. Then a leper appeared and went to his knees before Jesus, praying, “Master, if you want to, you can heal my body.”

3–4 Jesus reached out and touched him, saying, “I want to. Be clean.” Then and there, all signs of the leprosy were gone. Jesus said, “Don’t talk about this all over town. Just quietly present your healed body to the priest, along with the appropriate expressions of thanks to God. Your cleansed and grateful life, not your words, will bear witness to what I have done.”

After he came down from the mountain, large crowds followed him. 8:2 And a leper approached, and bowed low before him, saying, “Lord, if you are willing, you can make me clean.” 8:3 He stretched out his hand and touched him saying, “I am willing. Be clean!” Immediately his leprosy was cleansed. 8:4 Then Jesus said to him, “See that you do not speak to anyone, but go, show yourself to a priest, and bring the offering that Moses commanded, as a testimony to them.”

When he was come down from the mountain, great multitudes followed him. 2 And, behold, there came a leper and worshipped him, saying, Lord, if thou wilt, thou canst make me clean. 3 And Jesus put forth his hand, and touched him, saying, I will; be thou clean. And immediately his leprosy was cleansed. 4 And Jesus saith unto him, See thou tell no man; but go thy way, shew thyself to the priest, and offer the gift that Moses commanded, for a testimony unto them.