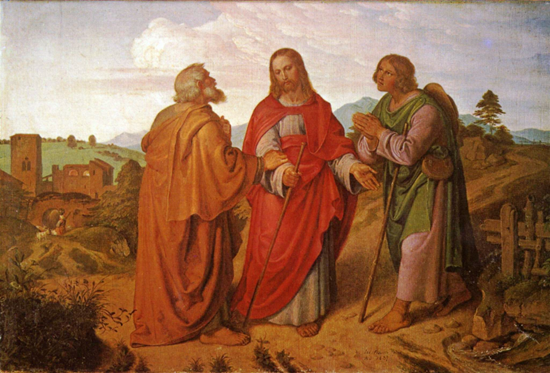 Jesus saw the crowds surrounding him had grown large so he gave orders to cross to the other side of the Sea of Galilee.

A teacher of the law came to him and said, “Teacher, I will follow you wherever you go.” Jesus replied, “Foxes have dens and birds have nests but the Son of Man has no place to lay his head.”

Another disciple said to Jesus, “Lord, first let me go and bury my father.” Jesus replied, “Follow me and let the dead bury their dead.”

Being a Christian requires commitment – even when it’s hard

Two beautiful quotations came from the shores along the Sea of Galilee that day, each a guiding response to a disciple. To the disciple that is overeager, Jesus reminds him of the inconveniences a follower of Jesus must accept. To the second disciple, who seems unenthusiastic, Jesus demands commitment.

Some Christians believe Christianity provides a secure life, free from pain and suffering. It does not. Indeed, Christians will experience joy, happiness, serenity, surprise, confidence, enthusiasm, and of course, love. But Jesus shows us in these verses that Christianity requires sacrifice and commitment too.

In the first quote, Jesus lets the scribe know that the life of a follower is not one of ease. In the second, we learn that followers of Jesus must turn their focus away from earthly matters in order to commit to God’s plan.

Neither man’s response is recorded but the Bible’s message is clear – maintaining our Christian principles supersedes all commitments – event when adhering to God’s plan is hard.

When the crowds grow large, Jesus told the disciples to cross the Sea of Galilee. Several times in the Bible we see Jesus pull away from the throngs of people. Sometimes Jesus withdraws from the hordes of people to be alone and pray. At other times, he requires privacy for the disciple’s lessons. In this case, possibly the crowd had become overly-excited. In this instance, upon withdrawing, Jesus will deliver a critically-important lesson to the disciples.

Jesus teaches disciples the importance of sacrifice and commitment

When a “teacher of the law”, or scribe, offered to follow Jesus wherever he went, Jesus replied, “Foxes have dens and birds have nests but the Son of Man has no place to lay his head.” The life of a follower was not elegant – even animals had shelter to live in but Jesus had no home on earth. His reply is akin to saying, “Will you really? Do you understand what you are pledging? No home, no soft pillow, always depending on the hospitality of others to survive. The life of a follower is not easy.”

Note however, that we do not see Jesus reject the man’s offer to follow.

Jesus as the Son of Man

Jesus uses the phrase “Son of Man” to describe himself thirty times in the Gospel of Matthew. The interpretation of the expression has proven to be challenging. The phrase, which derives from the Old Testament, is likely used to embody Jesus’ objective and persona in a single moniker. Its meaning is akin to “the man for the people” or “son of/for mankind”, describing Jesus’ high character as well as his intent to pave the way for man’s spiritual salvation. The phrase is used in the Old Testament too and thus, Jesus use of the phrase describes his unique authority on hearth – his messianic title.

“Let the dead bury their own”

When a disciple asks Jesus to “first let me go and bury my father”, Jesus replies, “Follow me and let the dead bury the dead”. The phrase seems harsh but there are a few items to consider when interpreting Jesus’ response.

The disciple may have been asking Jesus for a one-year reprieve – a 12-month period where, as burial customs of the day demanded, the man reburied the bones of his father in an ossuary. In the ancient Jewish society, citizens considered honoring parents the highest of all biblical commands. To break custom, and not inter (or reinter) a parent was a grave sign of disrespect.

A disciple’s father is near death

Some think the disciple’s language should be understood as a plea from a man whose father was dying or near death.  In other words, the disciple’s wish was to stay until his father had passed. Since the man was at a gathering to hear Jesus teach, we can infer that he was not mourning and therefore his father was potentially still alive.

As noted above, customs of the day emphasized a delicately timed process of interment – immediate burial, a period of mourning, then reinterment of the bones after one year. Given the elaborate and deeply-held customs, the statement “let me wait until I can bury my father” could indeed mean “let me wait until my father dies so I can bury him according to our customs”.

An idiom of the time

Others think the phrase “let the dead bury the dead” may have been an idiom of the time, an expression meaning “what you are asking does not really matter”. Jesus’ response may have been wordplay on a commonly used figure of speech.

It is more likely Jesus was making a distinction between the physical and the spiritually dead. In other words, “let the unbelievers who are spiritually dead bury the shell that was once your father, we have more important things to do.”

Regardless of the potential meaning of the phrase, Jesus’ message was clear. The disciple’s earthly duties no longer mattered. To follow Jesus and spread God’s message was of the utmost priority and required a strong commitment from the disciples.

Who were the two disciples Jesus spoke to?

Luke’s version of this story presents a third man who asks to go back and say goodbye to his family. Potentially this is the same disciple who asked to stay to bury his father but most believe it indeed was a third, separate person. Up to this point in the narrative, we can assume Andrew, John, Peter, James the Elder, Nathanael of Bartholomew, and Philip had already been called to discipleship. Similarly, we can presume Jesus’ brothers were already present (James the Younger, Joseph, Judas Lebbeus or Thaddeus, and Simon).

Taking into account the characteristics of the men as described in the story, some theorize that the first disciple (the overeager “teacher of the law”) was Thomas and the second (the unenthusiastic disciple) Judas Iscariot. Luke’s mention of a third man could be a reference to Matthew.

Note however, this is purely a hypothesis. Nothing in the verses conclusively identifies any of the men referenced.

Customs in Jerusalem from about 20 BC to 70 AD involved burying a loved one, then returning after a year to reinter the bones. Lying unburied was a great affront to both Jewish and Egyptian people in Jesus’ time. In fact, at the time, a well-known curse (or derogatory statement) towards a person was “may the earth not receive your corpse”.

When a person died, the body was immediately swept up by mourners and carried to a tomb on a moveable frame (a bier). The tradition may have derived due to the hot climate or from the manner of burying dead without embalming them first (a Jewish tradition). It is theorized that the burial took place quickly, even if some members of the family were unable to see the body before it was entombed.

After a year passed, the eldest son would return to retrieve the deceased’s bones from the tomb. The bones were then neatly arranged in an ossuary (a small burial box) and slid into a slot in the wall of a tomb. This burial tradition was one of the family’s most important obligation in the first century.

18 When Jesus saw the crowd around him, he gave orders to cross to the other side of the lake. 19 Then a teacher of the law came to him and said, “Teacher, I will follow you wherever you go.”

20 Jesus replied, “Foxes have dens and birds have nests, but the Son of Man has no place to lay his head.”

21 Another disciple said to him, “Lord, first let me go and bury my father.”

22 But Jesus told him, “Follow me, and let the dead bury their own dead.”

18–19 When Jesus saw that a curious crowd was growing by the minute, he told his disciples to get him out of there to the other side of the lake. As they left, a religion scholar asked if he could go along. “I’ll go with you, wherever,” he said.

20 Jesus was curt: “Are you ready to rough it? We’re not staying in the best inns, you know.”

21 Another follower said, “Master, excuse me for a couple of days, please. I have my father’s funeral to take care of.”

8:18 Now when Jesus saw a large crowd around him, he gave orders to go to the other side of the lake. 8:19 Then an expert in the law came to him and said, “Teacher, I will follow you wherever you go.” 8:20 Jesus said to him, “Foxes have dens, and the birds in the sky have nests, but the Son of Man has no place to lay his head.” 8:21 Another of the disciples said to him, “Lord, let me first go and bury my father.” 8:22 But Jesus said to him, “Follow me, and let the dead bury their own dead.”

18 Now when Jesus saw great multitudes about him, he gave commandment to depart unto the other side. 19 And a certain scribe came, and said unto him, Master, I will follow thee whithersoever thou goest. 20 And Jesus saith unto him, The foxes have holes, and the birds of the air have nests; but the Son of man hath not where to lay his head. 21 And another of his disciples said unto him, Lord, suffer me first to go and bury my father. 22 But Jesus said unto him, Follow me; and let the dead bury their dead.