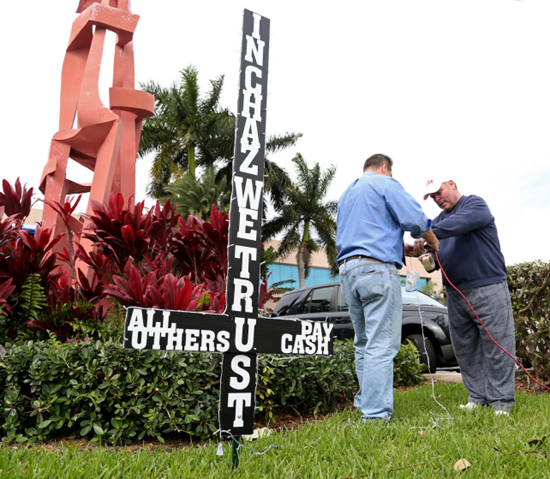 An atheist activist for the separation of church and state has placed a purposefully-disrespectful update-down cross on the lawn of Hallandale Beach City Hall in Florida. The man, Chaz Stevens, told the Sun Sentinel:

“This is terrible, isn’t it?  It’s pretty tacky.  We were going for tacky.  It’s horrible looking.  I love it.”

The 6-foot tall cross, black with white lettering that glows red at night, bears the words “In Chaz we trust, all others pay cash”.

Stevens sought permission for the display after seeing a Christian Nativity scene and Jewish Menorah displayed on City Hall property. He plans on seeking permission from other cities for similar displays in an effort to have tax code “favoritism” for religious organizations revoked. Stevens, who lives in Jupiter, Florida, says he plans on raising money through his Church of Satanology organization to “go on vacation and put up a few more similar displays”.

“We’ll be able to go and put these horrible-looking crosses up across America.”

Steven’s attacks on Christianity are not new. In December, Stevens applied to erect a rainbow Festivus pole (a fictional holiday created by the writers of the NBC comedy series Seinfeld) at the Arkansas state capitol in response to a Ten Commandments monument there.