How Christians should deal with death of a loved one (and no, every loss does not happen “for a reason”) 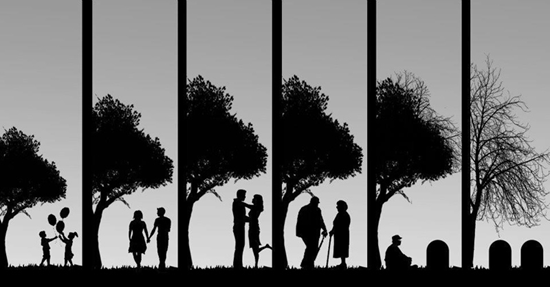 When we experience the loss or death of a loved one, grief, hurt and pain are minimized through a variety of coping mechanisms. Often, we rationalize the death as having been the result of some unknown reason or purpose that is beyond our ability to comprehend. In truth, death is an inevitable stage of life that derived as a consequence of Man’s original sin in the Garden of Eden. Thus, the reason for a loved-one’s death may simply be – it was that person’s time to die.

Most people deal with death in a familiar manner. Psychologist have found that humans often move through five stages of emotions (called the Kubler-Ross model) following a tragic loss. The time it takes a person to move through the five stages of grief varies as does the order in which they occur. A person sometimes moves through the stages multiple times, returning to an earlier stage of grief. In most instances, the first stage experienced is “denial”.

Many times, our first reaction to the death of a loved one is to deny the reality of the situation. It often manifests itself as a surreal feeling or thought, “This can’t be really happening”. In some cases, we are numbed by the loss.

Denial is a temporary response that helps buffer emotions by allowing us to avoid mental trauma from the event and thus, move more easily through the first wave of pain. Denying the loss of a loved one gives you time to begin the process of grieving. When coping stage begins to end, the emotions you were hiding will begin to break through.

After the first wave of pain eases, many begin to feel anger – anger at whomever caused the loss, hatred towards someone who failed to prevent the loss, or possibly blame directed at the person that died. Where denial is a coping mechanism, the anger stage is an attempt to mask the death. This stage results from a feeling of helplessness and is sometimes mistakenly directed toward God.

Not everyone goes through the anger stage but some will not just experience it, they may linger here. It’s important to recognize that this is a normal step in the grieving process – but one that must be moved on from. When this stage begins to end, you will begin to think more rationally – and the pain of death that you’ve masked will begin to emerge.

Bargaining is another line of defense against the emotions of grief. This stage is emotionally dangerous – if we do not properly resolve our feelings, we can be left with long-lasting remorse or lifelong guilt.

Depression can manifest itself in the form of sadness and regret and is easily the hardest stage to suffer through. This stage begins once we realize the true extent of the loss, usually a few days or weeks after the death. We may worry about the future without the loved-one or dread the moment when we bid the final goodbye to someone else.

During this emotional stage of grief, you may feel foggy, heavy, and deeply sad. This stage is also dangerous if not resolved quickly. Depression can lead to sleep and eating disturbances, lack of energy, fits of crying, and deep-seated psychological problems. If you become stuck at this stage, ask God to help bring you out of it.

In the final stage of grief, we accept the loss as an inevitable ending to a human life, one that each of us will experience at some point in our life. This phase is often marked by withdrawal and sober calm. You still feel sad, but you have begun to accept death as a part of life.

It as at this stage that you must recognize that things are different now. The void left by the loved one will not be filled and you may always feel pain when thinking about the lost loved on – but it will not be a numbing pain. You understand that there are more good days than bad days – but bad days still happen.

Christians are not exempt from pain and suffering

The “five-stages of grief”, including the “acceptance stage”, apply to Christians just as they apply to everyone else. God never said we would be exempt from pain and suffering. In fact, it’s an inevitable part of the human experience. By design, God gave us the ability to make our own choices which, of course, requires consequences for our actions. With the freedom to choose comes the potential for suffering from random chance events as well as the actions of others.

A small, innocent child was not murdered because of God. God does not “allow” a woman to be raped. God does not look the other way when a man is killed. Humans chose the full-life experience and since death, even unexpected death, is a part of life, we are responsible for the pain – not God.

On the other hand, that does not mean an unexpected death or negative consequence can serve no higher purpose. We should recognize that God can use an unfortunate event to benefit others. However, it is unwise to think God would choose to promote his plan by causing pain in others.

How Christians should handle death

Rationalizing death as having some unknown purpose is an empty excuse, a “cheat” to jump to the final stage of grief (acceptance). The danger of accepting death as some “unknown reason” risks shifting blame to God – a dangerous proposition to make.

God does not want to hurt us and in fact, when bad things happens, God hurts with us. A heartbreaking death did not happen for a reason – it just happened. And as painful as it may be, you must work your way to acceptance through prayer, companionship, forgiveness, and good old-fashioned faith in God’s promises. Once you reach acceptance, you will be able to reinvest in other relationships while truly being thankful for the time you had, no matter how short, with the loved one you lost.

What the Bible says about death and dying

Below are a collection of Bible verses related to death, sadness, and the afterlife.

For as in Adam all die, so also in Christ shall all be made alive.

Jesus said to her, “I am the resurrection and the life. Whoever believes in me, though he die, yet shall he live

“For God so loved the world, that he gave his only Son, that whoever believes in him should not perish but have eternal life.

And if I go and prepare a place for you, I will come again and will take you to myself, that where I am you may be also.

A Psalm of David. The Lord is my shepherd; I shall not want. He makes me lie down in green pastures. He leads me beside still waters. He restores my soul. He leads me in paths of righteousness for his name’s sake. Even though I walk through the valley of the shadow of death, I will fear no evil, for you are with me; your rod and your staff, they comfort me. You prepare a table before me in the presence of my enemies; you anoint my head with oil; my cup overflows. …

Do not marvel at this, for an hour is coming when all who are in the tombs will hear his voice

For the living know that they will die, but the dead know nothing, and they have no more reward, for the memory of them is forgotten.

Precious in the sight of the Lord is the death of his saints.

Truly, truly, I say to you, if anyone keeps my word, he will never see death.”

The LORD himself goes before you and will be with you; he will never leave you nor forsake you. Do not be afraid; do not be discouraged.

The Lord is near to the brokenhearted and saves the crushed in spirit.

“Let not your hearts be troubled. Believe in God; believe also in me.

Cast your burden on the Lord, and he will sustain you; he will never permit the righteous to be moved.

Is anyone among you suffering? Let him pray. Is anyone cheerful? Let him sing praise.

Casting all your anxieties on him, because he cares for you

And after you have suffered a little while, the God of all grace, who has called you to his eternal glory in Christ, will himself restore, confirm, strengthen, and establish you.

I do not ask that you take them out of the world, but that you keep them from the evil one.

And the peace of God, which surpasses all understanding, will guard your hearts and your minds in Christ Jesus.

I can do all things through him who strengthens me.