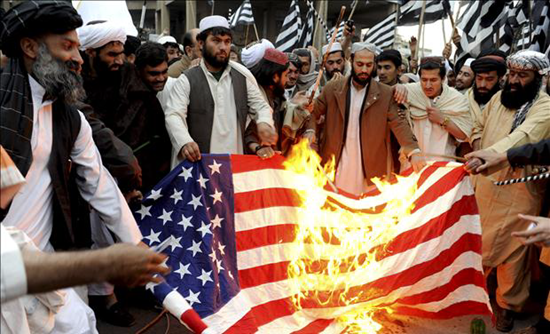 For those who feel Islam endorses violence and militant action as its primary theme, check out this interview with an Arab (Egyptian) billionaire investor during which they ask him a series of questions about the state of geopolitics in the Middle East. Given the violent battles current taking place in the area, the investor agreed to be interviewed only with the condition of anonymity claiming if they were to publish the interview along with his identity, it would “haunt him”. He added, “This is simply a reflection of the times in which we live.”

This snippet of the interview (conducted by Business Insider) provides a rare glimpse into a moderate Muslim’s view of the radicalization of Islam that is spreading through the area.  I have inserted notes explaining some of the references.  It is indeed an eye-opening interview.

How radical Islamists are created

Business Insider: How and why did ISIS come out of Syria?

Anonymous Arab Investor: You have a brand of extremist religions — extreme interpretation of Islam, which have their original roots in Saudi Arabia. That was the source of this interpretation, especially in the Wahabi interpretation. So, ‘70s started and even a little bit earlier.

Note: Wahhabism is a religions sect or form of Sunni Islam often described as ultraconservative and fundamentalist.  Wahabis believe Islam is a reform movement and are a dominant minority in Saudi Arabia.  Among their beliefs, Wahabis in Saudi Arab do not allow their females to work side by side with their men and they also are not allowed to drive a car.  They are often accused of being a source of global terrorism.  In contrast, Sunni Muslims are moderate, peaceful, and believe in the equality of women.

Anonymous Arab Investor: And, you know, it took roots because of a variety of social factors. It migrated to Egypt as a result of an unholy alliance between President Sadat and the Islamists who killed him. So, in 1971 President Sadat made a deal – that famous deal where he met the leaders of the Muslim Brotherhood in a place called Gianaclis [a neighborhood in Alexandria, Egypt], and they agreed that he would open the door to get them out of prison in return for them attacking the Nasserites [a socialist Arab nationalist political base] and the leftists, who were the strong party at that point in time. They succeeded, but he paid the ultimate price, which is his own life. Because at the end of the day he was killed by them.

And if you look at his four or five latest – the last speeches of his life, he said “I made a mistake. I should never have done this.” Then he ultimately, a number of weeks later, he paid with his life. Anytime you tamper with religion you will pay. Look at Al Qaeda and it’s the same story.

So we’re living with that and throughout the region, starting with al Qaeda, followed by ISIS. Now ISIS has 70,000/80,000 fighters in Syria and Iraq.

Any time you attempt to use religion to advance a political agenda, you get burned. Al-Qaeda and ISIS are both the result of failed attempts to use religion — whether it was the Russians in Afghanistan [Russians invaded Afghanistan in 1979 in an attempt to sweep aside Muslim tradition and move Afghanistan to a communist political structure] or the Assad regime in Syria — to advance a political agenda. I say ‘failed’ because although the prime objective was achieved, the unintended consequences were far, far more dangerous and enduring.

Business Insider: How great is the threat from extremists and what is the appropriate response?

Anonymous Arab Investor: Look at the map. Tunisia, Libya, Sinai, Syria, Iraq, Hamas, Yemen are all struggling with Islamic extremists. If Egypt had also been in that category you would have had a brand of repressive Islamic interpretation across the region. Everyone has a stake in Sisi’s [current President of Egypt] success — even the U.S. If he fails, significant terrorist attacks in the United States will be an every-decade occurrence.

The wrong interpretation of Islam

Business Insider: Can we have a pluralistic Middle East that involves Islam?

Anonymous Arab Investor: That involves Islam? Yes. That involves ‘Islamists’? No. The difference is between people who are devout versus those who have decided to take matters into their own hands — ‘religious activists,’ if you wish. It depends on which interpretation (of the Quran). The Egyptian president is a very devout Muslim, but he espouses an interpretation of Islam which is the right interpretation. Read his January 2015 ‘religious revolution’ speech [I’ve included the speech below]. It’s a very important speech. He said we need a religious revolution. We need to weed out the wrong interpretation of Islam — the one where people want to kill 5.8 billion people to the exclusion of 1.2 billion or 1.4 billion Muslims.

People need to make the very important distinction between Islam and a brand of interpretation of Islam which is extreme.

You know, you have the same extremism in the US. I sometimes look at several people in the US and think, “My God, they’re as bad as ours.” The difference is US extremists don’t, by and large, advocate violence.

If you want some extremists, go to the Bible Belt and I’m sure you’ll find a big share of them there. The difference is they have never espoused taking action into their own hands and killing other people. You’ll find the occasional lunatic. Our lunatics outnumber yours. They are not 100-150, they are 200,000-300,000.

The following is the “Religious Revolution” or “New Year’s Day” speech that the anonymous Arab investor referred to above.  Speaking before Al-Azhar and the Awqaf Ministry on New Year’s Day, 2015, and in connection to Prophet Muhammad’s upcoming birthday, Egyptian President Abdel Fattah al-Sisi, a vocal supporter for a renewed vision of Islam, made what must be his most forceful and impassioned plea to date on the subject.  Among other things, Sisi said that the “corpus of [Islamic] texts and ideas that we have sacralized over the centuries” are  “antagonizing the entire world”.

Here is the relevant snippet of Sisi’s speach:

I am referring here to the religious clerics.   We have to think hard about what we are facing—and I have, in fact, addressed this topic a couple of times before.  It’s inconceivable that the thinking that we hold most sacred should cause the entire umma [Islamic world] to be a source of anxiety, danger, killing and destruction for the rest of the world.  Impossible!

Is it possible that 1.6 billion people [Muslims] should want to kill the rest of the world’s inhabitants—that is 7 billion—so that they themselves may live? Impossible!

I am saying these words here at Al Azhar, before this assembly of scholars and ulema—Allah Almighty be witness to your truth on Judgment Day concerning that which I’m talking about now.

All this that I am telling you, you cannot feel it if you remain trapped within this mindset. You need to step outside of yourselves to be able to observe it and reflect on it from a more enlightened perspective.