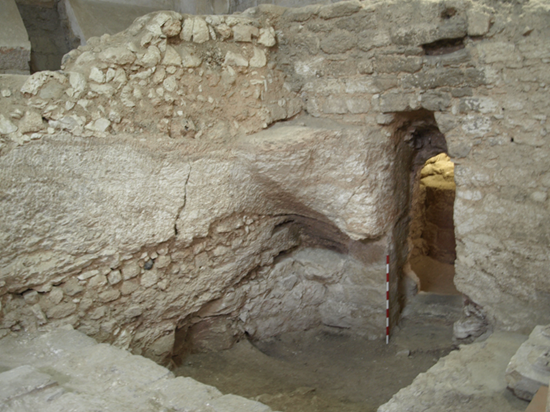 Archaeological excavations in the ancient city of Nazareth are rare but a recent excavation may have unveiled a startling new discovery – the home that Jesus grew up in. The site of the home Jesus was believed to have grown up in has been known for at least 100 years. In the 1800’s, nuns and school children from the Sisters of Nazareth convent dug at the site gathering historical first-century artifacts for a private collection kept at the convent. In 1936, Jesuit Father Henri Senes, an experienced architect, examined the site further and documented the structures and relics that were found by the nuns a few decades prior. The notes and drawings that Father Senes penned were used by archaeologists in 2006 to conduct a more thorough, professional survey of the area.

The Nazareth Archaeological Project, the first professional archaeological expedition to excavate the site, began their dig in 2006 (the nuns granted them full access to the site). What they found was startling. A large, elaborate Byzantine church, named the Church of Nutrition, had been built on the site. Archaeologists noted that the builders had carefully constructed the vaulted cellar of the Byzantine church to judiciously encompass the remains of a pre-existing home. Researchers also found Crusader-period walls around the structure indicating that around the 12th century, Crusaders who had ventured into the Holy Land, had fixed up the church after it fell into disrepair sometime around the 8th century. It was noted that the Crusaders also took great care to ensure the original walls of the private residence were left intact. All activities hinted that the site contained something of significant religious importance to the people. Was the site venerated as an important holy site?

Excavations continued for several years and archaeologists eventually reached the remains of the ancient home. They found a straight-lined structure that had been constructed by cutting back and into the side of a limestone hillside providing solid rock walls and structures for support. Stone-built walls were joined with the natural hillside walls to completely enclose the structure. The home included a series of rooms and a stairway built against one of the hillside walls. Archaeologists noted that the layout was typical of Early Roman-period “courtyard houses” in Galilee.

An archaeologist at the dig described the dwelling that they uncovered:

“The structure included a series of rooms. One, with its doorway, survived to its full height. Another had a stairway rising adjacent to one of its walls. Just inside the surviving doorway, earlier excavations had revealed part of its original chalk floor.”

A distinct limestone vessel found in the ruins of the structure suggested a Jewish family had occupied the home. Other artifacts (cooking pot, spindle whorl, drinking cups) allowed archaeologists to date the home to the first century AD or earlier (no “stratified pottery earlier or later than the Early Roman period were discovered in layers associated with the house”).

Next to the structure, two burial tombs were found (there was also evidence that the site had been quarried around the same time). It was odd to find burial tombs so close to a private home but archaeologists determined the tombs had been built after the home was vacated. Their presence next to the home was still unusual and offered more hints that the home and its occupants held some significance within the early religious community.

Noting that the later buildings constructed over the home, both the Byzantine and Crusader churches, were carefully placed over the structure in order to preserve it, they felt the site certainly held some sort of religious importance to the early Christian church. Given its location in Nazareth, it was fairly easy to presume what that importance was – a home that Jesus once lived in. The true reason the builders revered the site could not be known from an archaeological dig but a 7th century writer provided a very important clue.

Written by Adomnan of Iona in 670 AD, the De Locus Sanctis describes the city of Nazareth as it appeared just a few hundred years after the death of Jesus. Adomnan describes two large churches, including the Church of Annunciation which is located just across the street from the Sisters of Nazareth convent (the site of the residence presumed to have belonged to Jesus). Adomnan recorded that across the street from the Church of Annunciation were two tombs, one of which was the burial place for Joseph, the husband of the Virgin Mary. Between those tombs, Adomnan tells us, was the house in which Jesus was raised.

According to one archaeologist:

“Was this the house where Jesus grew up? It is impossible to say on archaeological grounds. On the other hand, there is no good archaeological reason why such an identification should be discounted.”

The pictorial below contains a collection of pictures related to Dr. Ken Dark’s archaeological dig at the Sisters of Nazareth convent.