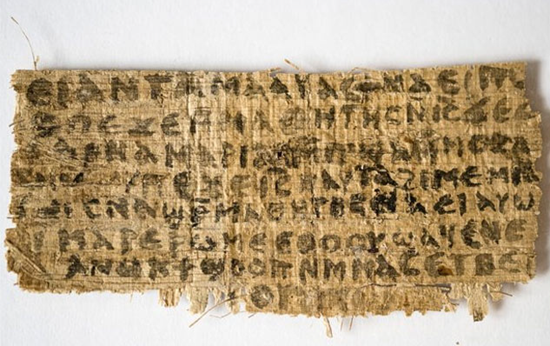 Within the study of Christianity, forged and faked ancient documents proclaiming a new shocking, revelation are nothing new. But recent news offering substantial evidence that the often-talked-about Gospel of Jesus’s Wife is a forgery – well, it breaks new ground – particularly since its authenticity was supported by Harvard University and promoted on the Smithsonian channel, both of which have an especially dark shade of black on their faces right now.

As biblical scholars have proclaimed all along, the “Gospel of Jesus’s Wife,” a faded scrap written in Coptic on a small business-card-size papyrus fragment and containing text that refers to Jesus being married, is looking more and more like a hoax (potentially fraud) – and it only took one young man studying photos on the Internet to figure it out. Meanwhile, Harvard University fell silent on the artifact and Smithsonian went ahead to promote and run a documentary on the “amazing find” despite early clues pointing to something fishy with the document.

The discovery of the Gospel of Jesus’s Wife was first announced by Karen King, of Harvard University, in September 2012. Its owner, who reportedly gave the papyrus to King, has insisted on remaining anonymous and King refuses to reveal the person’s identify. The fragment upended traditional Christian beliefs in its eight lines of text which contain the translated line, “Jesus said to them, ‘My wife …'” and also refers to a “Mary,” possibly Mary Magdalene, in a line which said “she will be able to be my disciple”. At the time of the discovery, King tentatively dated the papyrus to the fourth century A.D. Subsequent radiocarbon dating pushed the date by a few centuries place it between the sixth and ninth centuries A.D. Strike one.

King then published an essay which contained “supporting” documents provided by the anonymous owner. Those documents showed that the Gospel of Jesus’s Wife was purchased by the anonymous owner from ans-Ulrich Laukamp in 1999 and he, in turn, obtained it in Potsdam, in what was formerly East Germany, in 1963. Last week, Live Science published their own investigation in which they discovered that Laukamp was never in possession of the document. Representatives of Laukamp’s estate (he died in 2002) stated that he never owned the papyrus and had no interest in antiquities whatsoever. Also, he did not live in East Germany in 1963. Strike two.

Finally, Christian Askeland, an assistant research professor at Protestant University Wuppertal in Germany, revealed information that pounds the last nail in the coffin. Askeland noticed, from pictures published on the Internet, that whoever wrote the document had different ways of writing the same letter – a highly unusual characteristic for any writer. Askeland next examined a second papyrus that was also provided to King by the same anonymous donor. Askeland noticed that the writing on the second papyrus matched the writing on the Gospel of Jesus’s Wife document, linking the two documents to each other (i.e. they appear to have been written by the same person). This second papyrus, which has writing on two sides, includes text from the Gospel of John — and is a fake. This second papyrus, which was carbon dated to between the seventh and ninth centuries A.D., is very similar to a Gospel of John papyrus, written and published by Egyptologist Sir Herbert Thompson in 1924. In fact, the line breaks (the places where the text begins) are identical to those from Thompson’s text. As Askeland noted, “this defied coincidence.” Strike three.

Askeland also noted that the John fragment is written in a dialect of Coptic called Lycopolitan, which had died out by the seventh century A.D. During 2013 and 2014, biblical scholars aired many concerns about “grammatical anomalies” in the Jesus’ Wife fragment – most of their claims were met with mute concern from researchers.

“Dr. Askeland is an evangelical Christian who is also affiliated with Indiana Wesleyan University, an evangelical college in Marion, Ind., and the Green Scholars Initiative. That organization was founded by the Christian owners of the Hobby Lobby chain of arts and crafts stores to study a collection of biblical artifacts amassed by the family for display in a Bible museum they plan to build in Washington.”

Several researchers have already said that King should retract her findings. Lest we repeat once again – this is a *Harvard* researcher who’s support for the authenticity of the document was not only called into question by an amateur science blog site but by a young man who simply took the time to study the pictures provided by King in more detail. That this sort of keystone comedy originates from a major, world-renowned university is not only a tragedy but a testament to Christians belief that Christianity is under attack – and shows that attacks on our religion can originate from places you would least expect.