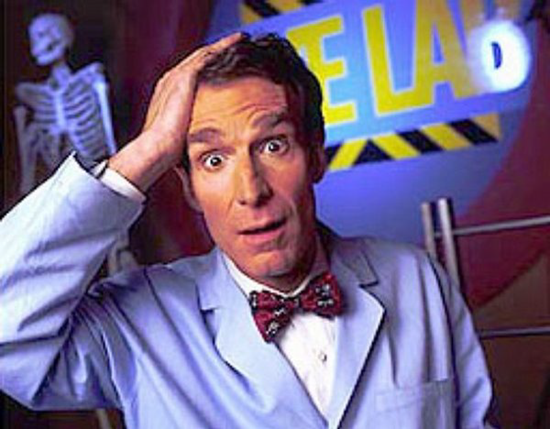 On the heels of a public debate with Creation Museum CEO Ken Ham, children’s science hero Bill Nye “The Science Guy” admitted to Huffington Post today that he is an agnostic and found the idea of a God that directs our lives as “troublesome”.  Nye is scheduled to debate Ham on February 4, 2014, a conversation in which Nye does not expect to convince Ham to adopt his views on evolution.

“Well I don’t think I’m gonna win Mr. Ham over, any more than Mr. Ham is going to win me over.  Instead, I want to show people that this belief (creationism) is still among us.  It finds its way into school boards in the United States.”

Nye, who despite the “science guy” moniker is not a scientist but rather a mechanical engineer, said that he is going into the debate as a “reasonable man”.  Nye explained that he had a hard time believing in a God that directs our lives.

“The idea that there is a plan for everybody, that this deity has it all worked out, and is really directing things is an extraordinary claim that I find troublesome.”

The Christian Post noted that Bill Nye “has often criticized teaching creationism to children in school, saying it can get in the way of scientific understanding.”

Creationists are a varied group with many believing that evolution is an impossibility if, as the biblical book of Genesis states, God created Man in six days.  Others however, find that the theory of evolution does not necessarily have to contradict the biblical story of the creation, proposing several alternatives including a non-literal translation of the Bible’s creation event and the belief that nothing would have prevented God from later returning to Earth and “tweaking” Man’s genetic makeup to alter the course of human development.