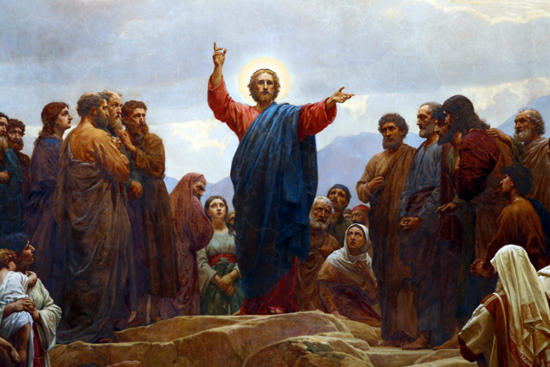 During the Sermon on the Mount, Jesus told listeners:

“Do not misunderstand and think that I am here to abolish Old Testament laws or Prophets. I have not come to abolish them but to fulfill them. Until heaven and earth disappear altogether, not the smallest letter nor least stroke of a pen will by any means disappear from the Old Testament until everything has been accomplished.

Unless your righteousness surpasses that of the Pharisees, you will certainly not enter the kingdom of heaven.”

Old Testament lessons are still relevant in a modern-day world

Jesus explicitly states that he is not attempting to dissolve or annul the authority and principles of the Old Testament but rather, is purposed to “fulfill them”, unfold their meaning and embody them in a living, human form. As we will see throughout the New Testament, Jesus fulfilled Old Testament “law” by both his obedience to the law and his teachings of it. Jesus expects the same from us. We must continue following God’s Old Testament lessons to remain truly righteous.

Jesus’ fulfillment of “the laws and the Prophets”

When Jesus says he came to “fulfill the law and the Prophets”, he means that he will live his life consistent with Old Testament law (the morals dictated throughout the Old Testament) as well as deepening our understanding of the them.

The Pharisees and righteousness

This is another example of Jesus’ criticism of the Pharisees, who in in an effort to obey Old Testament law, had turned it into a conglomeration of manufactured rules. In addition to the minutiae they created from the Old Testament, Pharisees followed the “oral law” (referred to by Jesus as the “tradition of the elders” or the “tradition of men”) and considered it to be as equally inspired and authoritative as the written Old Testament. Their oral law was said to have gone back to Moses and although unwritten, continued orally, paralleling the written Old Testament law.

As illustrated throughout the New Testament, the Pharisees appeared to others as righteous (they emphasized the ceremonial aspect of the laws over everything else) but failed to embrace the true meaning of God’s Old Testament word. Although they meant well, Jesus felt their interpretation of Old Testament law was flawed and convoluted. For example, with respect to the Old Testament law “love your neighbor”, the Pharisees literally taught that you loved the person you lived next door to but that it was acceptable to hate your enemies.

Jesus’ words were likely a shocking charge to make against the Pharisees who most (at the time) considered to be the epitome of religious morality, the holiest men in the community. Early on in his ministry, Jesus specifically pointed out that his intent was not to subvert Old Testament authority as his foes claimed (particularly later in his life), but to enhance it and correct the many misconceptions being taught by the Pharisees. The Bible Exposition Commentary illustrates this with a poetic example:

“If I have an acorn, I can destroy it in one of two ways. I can put it on a rock and smash it to bits with a hammer. Or, I can plant it in the ground and let it fulfill itself by becoming an oak tree.”

Jesus chose to demonstrate his controversial new interpretations by embodying Old Testament law throughout his life.

Do some verses in the New Testament say we should ignore the old laws?

Are these verses contradictions of themselves?  As we state many times throughout Bible Blender, you must not take selected snippets and pieces from the Bible and attempt to analyze them without proper context.  The same paradoxical situation can arise in your studies of science.  For instance, one science book may say ants are carnivores.  Another book may say they are herbivores while yet others say they are omnivores.  Which is it?  It depends – on the location, the type of ant, even the season.  Each statement taken out of context can be misleading and appear contradictory.

Using a biblical example (admittedly, an extremely micro-analyzed one), would you take the phrase “Thou shalt not kill”, strip the word “kill” out of the root context, and proclaim, “The Bible says “kill” so I should go out and murder someone”?  Of course not because you would be focusing on a single word and ignoring the overall context of the sentence.  Such is the case with the references to Old Testament laws (and various other topics) in the Bible.

It doesn’t matter who wrote the example statements above (for the curious, Paul, a Pharisee himself, is believed to have written most of them) but rather their context, in particular, the audience the statements were directed at. Christianity at the time was in an unusual position – it could be accepted by both Jews and Gentiles, two entirely different audiences.  We live in a day where Christianity is “well formed”, solidified, with well-understood translations.  In Jesus’ (or Paul’s) day, that framework did not exist and apostles operated in an era where Jewish and Christian beliefs were just beginning to diverge.  As such, the statements in Paul’s letters were intended to emphasize various points depending on the recipient or audience for his words.  For Gentiles, his message was intended to discourage them from embracing the incorrect interpretation of Old Testament law as understood by the Pharisees (popular at the time) as well as countering the threat to exclude New Testament teachings from their beliefs.

When these types of seemingly contradictory situations arise in your Bible study (or any other book that is thousands of years old and translated through multiple iterations), remember to take a step back and try to understand the lesson without assumptions or presuppositions (admittedly, difficult to do given how deeply they are embedded in our cognitive makeup).  Base your interpretation and understanding on the context of the verse and its context within the wider text of the Bible.

After the introduction and explanation of purpose and procedure, Jesus begins discussing various topics of Old Testament law (e.g. murder, adultery), explaining their meaning and expanding on their purpose.  Through the remaining Sermon on the Mount discourse, Jesus will explain the proper interpretation of Old Testament laws.

Not the “smallest letter” or “stroke of the pen”

The original untranslated language uses several familiar words to represent the “smallest letter”. Jot, used in many translations and which means the least bit, is a transliteration of the Latin word “iota”, which in Hebrew is the letter “yod”. When Aramaic replaced the older Hebrew script, the yod became the smallest in the alphabet and as such, referred to by its Greek name, iota, it underlies the famous “jot” of Matthew. Representations remain in our language as remnants of the old text – “iota” as in “not one iota of guilt” and “jot” as in “quickly jot this down on paper”.

17 “Do not think that I have come to abolish the Law or the Prophets; I have not come to abolish them but to fulfill them. 18 For truly I tell you, until heaven and earth disappear, not the smallest letter, not the least stroke of a pen, will by any means disappear from the Law until everything is accomplished. 19 Therefore anyone who sets aside one of the least of these commands and teaches others accordingly will be called least in the kingdom of heaven, but whoever practices and teaches these commands will be called great in the kingdom of heaven. 20 For I tell you that unless your righteousness surpasses that of the Pharisees and the teachers of the law, you will certainly not enter the kingdom of heaven.

17–18 “Don’t suppose for a minute that I have come to demolish the Scriptures—either God’s Law or the Prophets. I’m not here to demolish but to complete. I am going to put it all together, pull it all together in a vast panorama. God’s Law is more real and lasting than the stars in the sky and the ground at your feet. Long after stars burn out and earth wears out, God’s Law will be alive and working.

19–20 “Trivialize even the smallest item in God’s Law and you will only have trivialized yourself. But take it seriously, show the way for others, and you will find honor in the kingdom. Unless you do far better than the Pharisees in the matters of right living, you won’t know the first thing about entering the kingdom.

5:17 “Do not think that I have come to abolish the law or the prophets. I have not come to abolish these things but to fulfill them. 5:18 I tell you the truth, until heaven and earth pass away not the smallest letter or stroke of a letter will pass from the law until everything takes place. 5:19 So anyone who breaks one of the least of these commands and teaches others to do so will be called least in the kingdom of heaven, but whoever obeys them and teaches others to do so will be called great in the kingdom of heaven. 5:20 For I tell you, unless your righteousness goes beyond that of the experts in the law and the Pharisees, you will never enter the kingdom of heaven.

17 Think not that I am come to destroy the law, or the prophets: I am not come to destroy, but to fulfil. 18 For verily I say unto you, Till heaven and earth pass, one jot or one tittle shall in no wise pass from the law, till all be fulfilled. 19 Whosoever therefore shall break one of these least commandments, and shall teach men so, he shall be called the least in the kingdom of heaven: but whosoever shall do and teach them, the same shall be called great in the kingdom of heaven. 20 For I say unto you, That except your righteousness shall exceed the righteousness of the scribes and Pharisees, ye shall in no case enter into the kingdom of heaven.