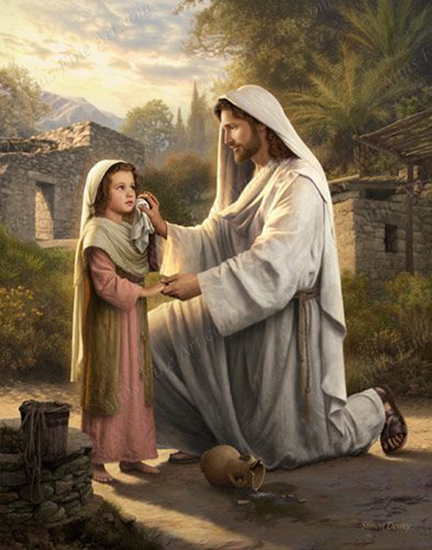 During the Sermon on the Mount, immediately after delivering the Beatitudes, Jesus began his ministry of “new law” – a different and expanded perspective of Old Testament teachings. He told those listening:

“You are the salt of the earth. But if salt loses its saltiness, it becomes useless, no longer good for anything, and must be thrown away.

You are the light of the world. A city built on a hill cannot be hidden nor does a person light a lamp and put it under a bowl. Instead, they put the lamp in a stand so it can give light to everyone in the room. In this same way, let your light shine before others so they see your good deeds and know you are led by God.”

Christians should lead by example

Jesus emphasizes that we must follow Christian principles consistently, at all times, and not be afraid to let others see that we live by Christian morals. In fact, by following Christian values, through our behavior, we will naturally demonstrate to others the Christian beliefs that we represent. But if we allow the essence of Christianity to be lost or diluted, it will lose all purpose.

Our values are expressed in our actions

Jesus uses two simple but powerful figures of speech to demonstrate his lesson and describe a true follower of God. Salt adds flavor and creates thirst, purifies, and preserves – just as a true Christian disciple would. Salt in this sense, speaks of the inward character a Christian must maintain. And a light, which cannot be hidden, expresses the outward testimony produced through living a Christian life which in turn, inherently demonstrates our belief in God.

Can salt lose its saltiness?

Without getting too caught up in semantics, the suggestion that salt can lose its saltiness does not have to be taken literally (actually, the opinion of whether or not salt can lose its flavor depends on its composition – see the science notes below). There are other instances in the New Testament where Jesus spoke in metaphors using impossible situations (e.g. a camel through the eye of a needle). However, there is evidence that the concept of “salt losing its saltiness” was a common phrase in Jesus’ day. In a story from the Babylonian Talmud, around 90 AD, the following discourse appears:

Question: “When salt loses its flavor, how can it be made salty again?

Response: “By salting it with the afterbirth of a mule.” Note: Mules cannot give birth, they are sterile – there is no afterbirth.

“Then does the mule bear young?”

“Can salt lose its flavor?”

In this instance, the topic of salt losing its saltiness was purposely used to indicate an impossibility.

One of Jesus’ instructions to his disciples was to “let their light shine before others”. In a later section of the Sermon on the Mount, Jesus will specifically instruct followers to “not practice their righteousness in front of others to be seen by them”. The two directives are not contradictory. Here Jesus is saying that good works that are properly motivated will naturally demonstrate God’s lessons to others. The later verse is an instruction to avoid self-glorification, the tendency to do good deeds specifically so others see them. The emphasis here should not be on the openness or subtlety of the actions but on the reason behind them. In other words, follow Christian principles and do not be afraid for others to see your morality in action (which may prompt them to seek the reason why the person is so different) but make sure you are living by those morals for the right reason.

Although we generally believe that salt cannot age and lose its flavor, there are ancient stories of old and “spoiled” salt being thrown into the streets (e.g. the case of sixty-five salt houses with earthen floors noted in The Land and the Book). How can salt lose its flavor, an inherent property of its chemical composition? Pliny noted that salt in Jesus’ day, which was typically derived from the Dead Sea, was often impure and contained other minerals such as gypsum in the mixture. When the salt leached out of the mixture, the salt became a weak product and was disposed of.

Hide it under a “bushel”

The ancient “bowl” implicated in “hiding the light” is really a basket or bushel container for measure of dry grain material. Typically the size of the container was about two gallons. Surprisingly, the original word could also be translated as “box”.

Put the light on its “stand”

The “stand” referred to in the story was a common piece of furniture in every one-room home during Jesus’ day. It is not a candlestick but literally a lamp-stand used to hold the lighting mechanism.

13 “You are the salt of the earth. But if the salt loses its saltiness, how can it be made salty again? It is no longer good for anything, except to be thrown out and trampled underfoot.

14 “You are the light of the world. A town built on a hill cannot be hidden. 15 Neither do people light a lamp and put it under a bowl. Instead they put it on its stand, and it gives light to everyone in the house. 16 In the same way, let your light shine before others, that they may see your good deeds and glorify your Father in heaven.

“Let me tell you why you are here. You’re here to be salt-seasoning that brings out the God-flavors of this earth. If you lose your saltiness, how will people taste godliness? You’ve lost your usefulness and will end up in the garbage.

“Here’s another way to put it: You’re here to be light, bringing out the God-colors in the world. God is not a secret to be kept. We’re going public with this, as public as a city on a hill. If I make you light-bearers, you don’t think I’m going to hide you under a bucket, do you? I’m putting you on a light stand. Now that I’ve put you there on a hilltop, on a light stand—shine! Keep open house; be generous with your lives. By opening up to others, you’ll prompt people to open up with God, this generous Father in heaven.

5:13 “You are the salt of the earth. But if salt loses its flavor, how can it be made salty again? It is no longer good for anything except to be thrown out and trampled on by people. 5:14 You are the light of the world. A city located on a hill cannot be hidden. 5:15 People do not light a lamp and put it under a basket but on a lampstand, and it gives light to all in the house. 5:16 In the same way, let your light shine before people, so that they can see your good deeds and give honor to your Father in heaven.

13 Ye are the salt of the earth: but if the salt have lost his savour, wherewith shall it be salted? it is thenceforth good for nothing, but to be cast out, and to be trodden under foot of men. 14 Ye are the light of the world. A city that is set on an hill cannot be hid. 15 Neither do men light a candle, and put it under a bushel, but on a candlestick; and it giveth light unto all that are in the house. 16 Let your light so shine before men, that they may see your good works, and tglorify your Father which is in heaven.