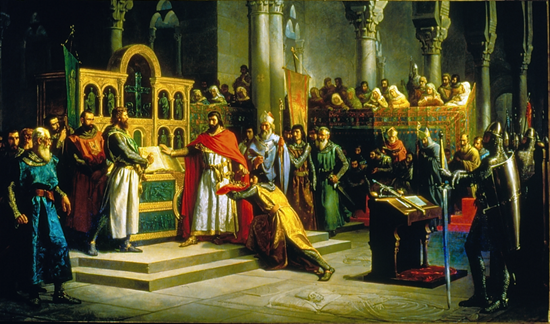 Continuing the Sermon on the Mount, Jesus told his disciples and followers:

“You have heard it said, ‘Do not break your oaths. Fulfill before God all vows you have made.’ But I tell you, when making promises, do not swear an oath at all. You do not make your words more true by embellishing them with religious lace. All you need to say is simply “yes” or “no”. Anything more than that is misleading verbiage coming from the Devil.

Christian promises are by default, made in God’s name

Of course, the Old Testament also emphasizes that we should fulfill any pledges we make to others. An honorable man should be as truthful as any oath and a Christian’s promise in particular is by default, made in the Lords name.

The Pharisees and their inane promises

Jesus likely brought up the topic of pledges because the Pharisees were notorious for their oaths, made on a whim, for even the smallest of inane promises. They would avoid using God’s name in their oaths but would use a surrogate object by which to swear (e.g. “swear by heaven”, “swear by Jerusalem”, or swearing by some part of their body). Then they would seek a means to sidestep the oath making their extraneous emphasis inserted into their pledge totally meaningless. To cover their misdirection, they argued that a lie was not sinful if sworn to in a carefully constructed manner.

All oaths are forbidden vs. the virtue of honesty

This particular scripture can potentially be interpreted multiple ways (i.e. forbidding oaths in God’s name vs. the Christian virtue of honesty and integrity) and to correctly deduce its meaning, we must consider it within the greater context of the biblical lessons. The ambiguity in the text can be especially disconcerting to some given that in an era when non-believers battle to “separate church and state”, oaths made “under god” seem to be one of the last visages of God in our societal infrastructure. But is invoking God as a guarantor of the oath acceptable or not?

To recognize the correct interpretation of these verses, you must possess broader knowledge of the Bible and a better understanding of other instances where oaths and promises are discussed. Still, even with other biblical examples in hand, there may be ambiguity in our breakdown of the question. The analysis begins with studies of other bible verses related to oaths and promises…

Other biblical verses related to oaths and promises

In the New Testament, we see an instance where Jesus responded positively to an oath. The words he used in the response however, may lend support to either interpretation of the command. When Jesus was “charged under oath by the living God” and asked if he was the Son of God”, his response was “You have said so”. (Matthew 26:63). His response was positive, but not as solidly affirmative as we need to understand the correct interpretation of his lesson.

Paul also swore an oath, when he stated “I call God as my witness, and I stake my life on it”, implying that his interpretation of the command allowed oaths. (2 Corinthians 1:23)  To further confuse matters, James seems to specifically prohibit oaths when he said “Above all, do not swear, by heaven or by earth or by anything else”, hinting that his interpretation of Jesus’ words prohibits oaths entirely.

Given that the Old Testament laws allow oaths (and Jesus’ intent was not to overturn Old Testament laws but to clarify them), it is likely that Jesus was simply setting a higher standard for truth. The Bible’s point in prohibiting oaths, was probably not to prohibit oaths entirely (even Jesus was recorded as taking an oath although he typically avoided formal affirmations instead using phrases such as “You said it” in response), but rather to emphasize that one should tell the truth at all times rather than requiring truth based on a phrase of reverence to God. This is especially relevant for example, to persons who are in the habit of ending every statement with “I swear to God”.

In other words, oaths themselves may not be evil, but the motivation for engaging in one could be. Sadly, since ancient times, a person’s integrity could not always be relied on and oaths, especially in legal scenarios where a commitment of truth was required, became necessary. In the end, understand that God expects us to always be truthful, and using his name as an appeal for his involvement in our statements should not be necessary.

If you wish to avoid an oath (a commitment made to the witness’s deity), you can agree to affirm instead (a secular variant of the oath where the witness does not have to mention a deity or holy book). To do so, simply reply “I do affirm” or substitute the phrase “so help you God” with the phrase “under pains and penalties of perjury”.

Don’t confuse Jesus’ statements (regarding swearing) with cursing. The scripture in this instance is specifically regarding the use of oaths to affirm what a person says is true.

Use of oaths in ancient societies

Most ancient societies utilized the concept of oaths – we know this from several historical sources (e.g. Homer, Oedipus Rex, Euripides, Cornelius). In those societies, breaking an oath was dangerous, either by invoking the wrath of their deities or the punishment of the legal authorities. In addition to the expected punishment from God, Jewish authorities themselves punished those who broke oaths too.

Interestingly, most oaths in ancient Israel were accompanied by the placement of the hand on or under the thigh (possibly symbolic of submission) or by raising the hands towards heaven.

There are two (possibly three) terms in the Hebrew language that mean “oath”. One of the terms meant to enter into an almost solemn relationship with the number seven, a number that occurs often in the Bible.

33 “Again, you have heard that it was said to the people long ago, ‘Do not break your oath, but fulfill to the Lord the vows you have made.’ 34 But I tell you, do not swear an oath at all: either by heaven, for it is God’s throne; 35 or by the earth, for it is his footstool; or by Jerusalem, for it is the city of the Great King. 36 And do not swear by your head, for you cannot make even one hair white or black. 37 All you need to say is simply ‘Yes’ or ‘No’; anything beyond this comes from the evil one.

“And don’t say anything you don’t mean. This counsel is embedded deep in our traditions. You only make things worse when you lay down a smoke screen of pious talk, saying, ‘I’ll pray for you,’ and never doing it, or saying, ‘God be with you,’ and not meaning it. You don’t make your words true by embellishing them with religious lace. In making your speech sound more religious, it becomes less true. Just say ‘yes’ and ‘no.’ When you manipulate words to get your own way, you go wrong.

5:33 “Again, you have heard that it was said to an older generation, ‘Do not break an oath, but fulfill your vows to the Lord.’ 5:34 But I say to you, do not take oaths at all—not by heaven, because it is the throne of God, 5:35 not by earth, because it is his footstool, and not by Jerusalem, because it is the city of the great King. 5:36 Do not take an oath by your head, because you are not able to make one hair white or black. 5:37 Let your word be ‘Yes, yes’ or ‘No, no.’ More than this is from the evil one.”

33 Again, ye have heard that it hath been said by them of old time, Thou shalt not forswear thyself, but shalt perform unto the Lord thine oaths: 34 But I say unto you, Swear not at all; neither by heaven; for it is God’s throne: 35 Nor by the earth; for it is his footstool: neither by Jerusalem; for it is the city of the great King. 36 Neither shalt thou swear by thy head, because thou canst not make one hair white or black. 37 But let your communication be, Yea, yea; Nay, nay: for whatsoever is more than these cometh of evil.