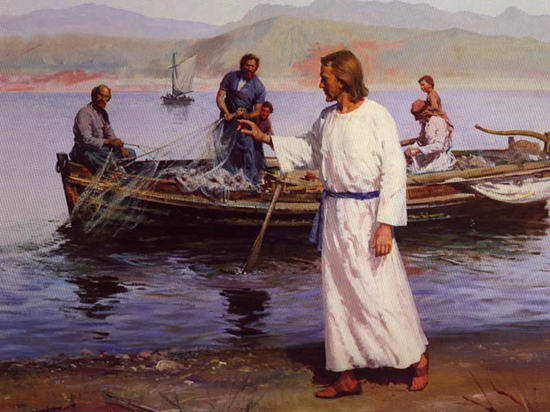 As Jesus was walking along the shoreline of the Sea of Galilee, he saw Simon (aka Peter) and his brother Andrew casting a net into the lake (the brothers were fishermen). Jesus told them, “Come with me and I will make you fishers of men.” At once, Peter and Andrew went with Jesus.

Continuing along the shoreline, Jesus saw James and his brother John (who were also fishermen). They were in a boat with their father preparing (washing or mending) their fishing nets. Jesus called to them and they at once left their boat and followed Jesus.

What makes a disciple?

As the number of Jesus’ disciples begins to grow, it is important to recognize the sacrifice that these men made when they decided to follow Jesus. In order to assist Jesus with spreading the new message, the men left their professions and likely their families (the books of Matthew and Mark specifically point out that Peter and Andrew left not only their boat, but their father who was in the boat). What makes a person a “disciple” is their willingness to follow the lessons that Jesus taught, no matter what the cost.

The Gospel of Luke provides a longer account of the events that occurred that day. In Luke’s Gospel, Jesus enters a boat and begins teaching. Jesus then produces a miraculous catch of fish for the fishermen (enough fish to tear their nets and weigh down the boat) before making his offer to become disciples.

Did Jesus pick the disciples at random?

To many who read the story, it is presumed that Jesus picked the disciples at random. In fact, other accounts of the event indicate that Jesus knew the men beforehand or had at least met them prior to talking to them on the shores of the Sea of Galilee. The men certainly knew of Jesus (who had been teaching in town) and had continued their professions as fishermen after first encountering him. Only when Jesus approached them by the Sea did they agree to follow and assist him with his ministry. With this knowledge in hand, re-read the verses (see verses below) and it will become apparent that Matthew is not inferring that this was the first time the men had met or that they were randomly picked from the seaside fishermen at Gennesar.

The Sea of Galilee

Jesus spent much of his time teaching on or near the beautiful shores of the Sea of Galilee (also known as Gennesar, Gennesaritis or Sea of Tiberias). The Sea of Galilee is located in a valley (the Jordan Rift). With rocky shores and the majestic Mount Hermon nearby, its waters are fed by the Jordan River (which supplies ¾ of the water in the lake) and numerous springs on the northwestern side of the lake (where as a result, fishing was known to be particularly good). During the winter months the Sea of Galilee waters whip up choppy waves while in the summer, violent storms can kick up suddenly when warm sea air collides with cooler air tumbling from the nearby mountains.

Archaeologists have found several manmade harbors and artificial breakwaters around the Sea of Galilee, some dating many thousands of years before Jesus’ day. This attests to the commercial importance of the lake. The harbor at Capernaum was particularly notable, stretching 2,500 feet along the shore.

Fishing was an important commerce in Capernaum and an essential source of food for its citizens. The fishermen’s boats were about 30 feet in length with a sail for propulsion and an indoor cabin for shelter from the elements. The boats were well-constructed – often a single boat would be used for several decades.

Life on a fishing boat

Using a crew of six or more men, the boats were maneuvered with oars on each side. Supplies typically carried on a fishing boat included rope, extra oars, a stone anchor, clothes, food, baskets, nets, and repair tools. The fishermen often worked at night using torches and thus, torches and fuel were often carried onboard.

How the men operated the fishing boats

In deeper waters, boats often worked in pairs using a net strung between the two boats. Closer to shore the net could be maneuvered with a single boat and men on shore to pull the catch in.

The importance of fishing nets

Fishing nets were expensive and required great care. Fishermen spent much of their time washing and mending nets (typically at the end of each day).

18 As Jesus was walking beside the Sea of Galilee, he saw two brothers, Simon called Peter and his brother Andrew. They were casting a net into the lake, for they were fishermen. 19 “Come, follow me,” Jesus said, “and I will send you out to fish for people.” 20 At once they left their nets and followed him.

21 Going on from there, he saw two other brothers, James son of Zebedee and his brother John. They were in a boat with their father Zebedee, preparing their nets. Jesus called them, 22 and immediately they left the boat and their father and followed him.

18 Walking along the beach of Lake Galilee, Jesus saw two brothers: Simon (later called Peter) and Andrew. They were fishing, throwing their nets into the lake. It was their regular work. 19 Jesus said to them, “Come with me. I’ll make a new kind of fisherman out of you. I’ll show you how to catch men and women instead of perch and bass.” 20 They didn’t ask questions, but simply dropped their nets and followed.

21 A short distance down the beach they came upon another pair of brothers, James and John, Zebedee’s sons. These two were sitting in a boat with their father, Zebedee, mending their fishnets. Jesus made the same offer to them, 22 and they were just as quick to follow, abandoning boat and father.

4:18 As he was walking by the Sea of Galilee he saw two brothers, Simon (called Peter) and Andrew his brother, casting a net into the sea (for they were fishermen). 4:19 He said to them, “Follow me, and I will turn you into fishers of people.” 4:20 They left their nets immediately and followed him. 4:21 Going on from there he saw two other brothers, James the son of Zebedee and John his brother, in a boat with Zebedee their father, mending their nets. Then he called them. 4:22 They immediately left the boat and their father and followed him.

18 And Jesus, walking by the sea of Galilee, saw two brethren, Simon called Peter, and Andrew his brother, casting a net into the sea: for they were fishers. 19 And he saith unto them, Follow me, and I will make you fishers of men. 20 And they straightway left their nets, and followed him. 21 And going on from thence, he saw other two brethren, James the son of Zebedee, and John his brother, in a ship with Zebedee their father, mending their nets; and he called them. 22 And they immediately left the ship and their father, and followed him.