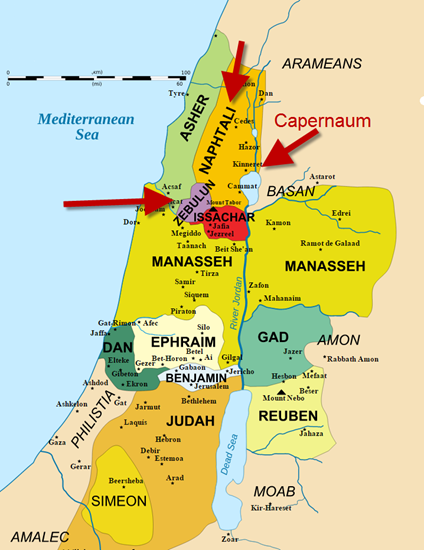 Jesus heard that John the Baptist had been arrested and put in prison so he left Nazareth and went to Galilee to live in Capernaum. Capernaum is a city by a lake in the area of Zebulun and Naphtali. Jesus’ move to Capernaum fulfils the prophesy of Isaiah which said:

“Land of Zebulun and Naphtali, by the Sea, beyond Jordan, in Galilee where the Gentiles lived, people living in darkness have seen a great light. On those who live in the shadow of death, a light has dawned.”

From this time on, Jesus began to preach his message, “Repent, for the kingdom of God has come near.”

Jesus begins spreading his message of love, understanding, and repentance

When John the Baptist’s ministry ended, Jesus’ began. The events prior to this served to prepare Jesus for his ministry. From this point forward, Jesus began preaching to the masses, spreading his message of love, understanding, and repentance.

The fulfillment of Old Testament prophesy that Matthew quotes is from Isaiah 9:1 and says in part:

“He humbled the land of Zebulun and the land of Naphtali, but in the future he will honor Galilee of the nations, by Way of the Sea, beyond the Jordan. The people walking in darkness have seen a great light. On those living in the land of deep darkness, a light has dawned.”

Jesus moved from Nazareth into the area settled by the tribes of Zebulun and Naphtali. Isaiah prophesied that light would come to this area of Galilee and Matthew saw Jesus’ movement to the Capernaum as fulfillment of Isaiah’s prophesy.

The city of Capernaum – Jesus’ “own city”

Capernaum (meaning, “house of Nahum”) was a fishing town, the nearest city to the Jordan River, located on the northwestern shore of the Sea of Galilee (the Bible’s description of the location is sufficient to pinpoint its location and the historian Josephus adds additional helpful detail). The layout of the town consisted of a large north-south main street with small districts bordered by small cross-sectional streets and no-exit side-streets. Situated on the “highway” connecting the region to Damascus, it was a major trade and economic center in northern Galilee.

Capernaum became the base of operations for Jesus’ ministry where he taught in private homes and the synagogue, recruited his first disciples, and became renowned for his power to heal the sick. Several of his most famous documented miracles occurred in Capernaum including calming the sea and walking on water. In addition to being Jesus’ home, Peter, Andrew, Matthew, and likely John and James also lived there. The city was populated by both Jews and Gentiles making it a mixed-religion area more conducive to the spread of Christianity than other areas of Galilee.

Archaeological excavations (at a site called Tell Hum) indicate the area was occupied from 2,000 BC to around 1,000 AD. Thousands of coins have been found at the site (which helped date the site) as well as extensive ruins of walls, foundations, and a beautiful synagogue which may have been the very one that Jesus taught in. The synagogue, discovered in the mid 1800’s, was built from ornately carved, white stones covered with fine stucco and includes a large sanctuary, two patios, and a smaller chapel room.

Located between the synagogue and the lakeshore lies an octagon-shaped church built over the remains of an even older church (unusual shaped structures were often used to commemorate an important site). The original (older) church was built around a first-century BC private home, a modest structure constructed with coarse walls and a roof of straw and earth. That a series of churches were built over a private home is extraordinary and today the original abode is believed to be the house that Peter lived in. According to Biblical Archaeology:

“In the years immediately following Jesus’ death, the function of the house changed dramatically. The house’s main room was completely plastered over from floor to ceiling—a rarity for houses of the day. At about the same time, the house’s pottery, which had previously been household cooking pots and bowls, now consisted entirely of large storage jars and oil lamps. Such radical alterations indicate that the house no longer functioned as a residence but instead had become a place for communal gatherings, possibly even the first Christian gatherings, and a key factor in how Christianity began.”

In 1986 the water of the lake reached an unusually low level. At that time, an ancient fishing boat was discovered that was dated to 120 BC – 40 AD. The discovery revealed much information about fishermen of that time.

The area of Zebulun

As described in the book of Genesis, Zebulun was the tenth son of Jacob (and Leah) who occupied a wedge of land in what would come to be known as southern Galilee. The land of Zebulun’s tribe was located between Issachar/Asher and Naphtali (between the southern edge of the hills of Lower Galilee and just north of Mount Carmel). The exact boundaries of the territory are currently not known.

The area of Naphtali

Naphtali was the sixth son of Jacob (and Bilhah). The tribe that bears his name occupied a territory north of the Sea of Galilee that extended along the western side of the Jordan River.

The word “preach” in this context differs from the meaning of “preach” today. In Jesus’ day, it connotes something more akin to an official announcement or declaration of something that has changed. A closer translation would be “to announce as a herald”.

The kingdom of “heaven” has come near

Not necessarily an issue of translation but more one of custom – in Jesus’ day, it was common to avoid using the word “God” out of respect. As such, some translations retain the spirit of the day and use “kingdom of heaven” instead of the more accurate (in meaning) “kingdom of God”.

12 When Jesus heard that John had been put in prison, he withdrew to Galilee. 13 Leaving Nazareth, he went and lived in Capernaum, which was by the lake in the area of Zebulun and Naphtali—14 to fulfill what was said through the prophet Isaiah:

15 “Land of Zebulun and land of Naphtali, the Way of the Sea, beyond the Jordan, Galilee of the Gentiles— 16 the people living in darkness have seen a great light; on those living in the land of the shadow of death a light has dawned.”

17 From that time on Jesus began to preach, “Repent, for the kingdom of heaven has come near.”

12 When Jesus got word that John had been arrested, he returned to Galilee. 13 He moved from his hometown, Nazareth, to the lakeside village Capernaum, nestled at the base of the Zebulun and Naphtali hills. 14 This move completed Isaiah’s sermon:

15 Land of Zebulun, land of Naphtali, road to the sea, over Jordan, Galilee, crossroads for the nations. 16 People sitting out their lives in the dark saw a huge light; Sitting in that dark, dark country of death, they watched the sun come up.

17 This Isaiah-prophesied sermon came to life in Galilee the moment Jesus started preaching. He picked up where John left off: “Change your life. God’s kingdom is here.”

4:12 Now when Jesus heard that John had been imprisoned, he went into Galilee. 4:13 While in Galilee, he moved from Nazareth to make his home in Capernaum by the sea, in the region of Zebulun and Naphtali, 4:14 so that what was spoken by Isaiah the prophet would be fulfilled:

4:15 “Land of Zebulun and land of Naphtali, the way by the sea, beyond the Jordan, Galilee of the Gentiles— 4:16 the people who sit in darkness have seen a great light, and on those who sit in the region and shadow of death a light has dawned.”

4:17 From that time Jesus began to preach this message: “Repent, for the kingdom of heaven is near.”

12 Now when Jesus had heard that John was cast into prison, he departed into Galilee; 13 And leaving Nazareth, he came and dwelt in Capernaum, which is upon the sea coast, in the borders of Zabulon and Nephthalim: 14 That it might be fulfilled which was spoken by Esaias the prophet, saying, 15 The land of Zabulon, and the land of Nephthalim, by the way of the sea, beyond Jordan, Galilee of the Gentiles; 16 The people which sat in darkness saw great light; and to them which sat in the region and shadow of death light is sprung up.

17 From that time Jesus began to preach, and to say, Repent: for the kingdom of heaven is at hand.