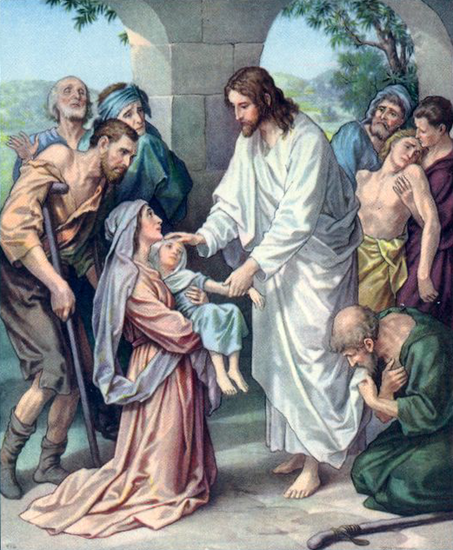 Jesus travelled throughout Galilee, teaching in the synagogues, proclaiming the good news of love, hope, understanding, and repentance. Throughout his travels through Galilee, he healed people, curing them of all types of sickness and disease.

News spread through Galilee about the miracles Jesus was performing and soon people from throughout the area were bringing their sick to him. Jesus cured any and all medical afflictions including disease, pain, demon-possession, seizures, and even paralysis. Large crowds from Galilee, the Decapolis, Jerusalem, Judea, and the region across the Jordan River (i.e. Transjordan) began following him.

Jesus leads by example and actions

No sooner had Jesus’ ministry begun, his popularity exploded throughout the region. It is important to recognize that Jesus’ popularity derived not just from his teachings, but by his actions (e.g. kindness, compassion, healing the sick and wounded). It is easy to imagine that his example of kindness and compassion must have surely spread through the people he met during his journey, who in turn, propagated the message as they moved through their daily lives. The same applies to us today. Our actions truly do speak louder than our words.

Jesus’ explosion in popularity and renown

From all appearances, Jesus had been ministering for very little time when the tales of his miracles erupted throughout the area. As people arrived from far-away lands, they were healed and likely carried back word of the miraculous events to their homelands further spreading the news of the new Messiah. Soon, large crowds of people followed Jesus to witness the miracles and hear his teachings.

Little did the people of the day know, but the miracles they were seeing were only the beginning.  Something truly earth-shattering had begun.

Medical knowledge of the time was limited and could not clearly distinguish between the different afflictions and diseases. Hence, some of the medical afflictions described by Matthew (e.g. “moonstruck”) may differ from the more scientific terminology that is used today. The scriptures are clear however, in pointing out that Jesus cured them all, regardless of their cause.

The purpose of synagogues

Synagogues in Jesus’ day were places for Jewish prayer, worship, and teaching. It was common for people to gather in synagogues to read the Old Testament scripture and openly discuss the content. Rabbis could lecture there, explaining the law or offering instructions to participants.

The common rule of the day was to have a synagogue wherever ten “learned men” or professed students of the Old Testament law resided. Larger towns had several synagogues and the number of synagogues in Jerusalem approached five hundred.

The location called “The Decapolis”

This location named The Decapolis is not immediately recognizable by most. In Jesus’ day, it referred to a league of towns that were located across the Jordan River, east of the Sea of Galilee, in an area corresponding roughly with the Old Testament region of Gilead.

The Greek name for Decapolis literally means “ten towns”. They were not an official league or political structure but were grouped together because of their similar language, culture, and location. The historian Pliny the Elder named the ten cities as Gerasa (Jerash) in Jordan, Scythopolis (Beth-Shean) in Israel, Hippos (Hippus or Sussita) in Israel, Gadara (Umm Qais) in Jordan, Pella (West of Irbid) in Jordan, Philadelphia in modern day Amman, Capitolias (Beit Ras) in Jordan, Canatha (Qanawat) in Syria, Raphana in Jordan, and Damascus, the capital of modern Syria (rarely considered a part of Decapolis by modern scholars because of its distance from the other cities). Ptolemy added to this list of towns and included eight more cities (for a total of eighteen).

Of the ten town listed by Pliny, Jerash (Gerasa) and Bet She’an (Scythopolis) survive as towns today, while Damascus and Amman (Philadelphia) have become important capital cities. Twentieth-century archaeology has identified most of the other cities.

The medical afflictions listed by Matthew

The original text mentions “those who were moonstruck”. Various translations guess at the meaning of this text (and word their translation as such) with most assuming that “moonstruck” is referring to epileptic seizures. It may also mean “lunatic” or someone with some type of mental disorder.

23 Jesus went throughout Galilee, teaching in their synagogues, proclaiming the good news of the kingdom, and healing every disease and sickness among the people. 24 News about him spread all over Syria, and people brought to him all who were ill with various diseases, those suffering severe pain, the demon-possessed, those having seizures, and the paralyzed; and he healed them. 25 Large crowds from Galilee, the Decapolis, Jerusalem, Judea and the region across the Jordan followed him.

23 From there he went all over Galilee. He used synagogues for meeting places and taught people the truth of God. God’s kingdom was his theme—that beginning right now they were under God’s government, a good government! He also healed people of their diseases and of the bad effects of their bad lives. 24 Word got around the entire Roman province of Syria. People brought anybody with an ailment, whether mental, emotional, or physical. Jesus healed them, one and all. 25 More and more people came, the momentum gathering. Besides those from Galilee, crowds came from the “Ten Towns” across the lake, others up from Jerusalem and Judea, still others from across the Jordan.

4:23 Jesus went throughout all of Galilee, teaching in their synagogues, preaching the gospel of the kingdom, and healing all kinds of disease and sickness among the people. 4:24 So a report about him spread throughout Syria. People brought to him all who suffered with various illnesses and afflictions, those who had seizures, paralytics, and those possessed by demons, and he healed them. 4:25 And large crowds followed him from Galilee, the Decapolis, Jerusalem, Judea, and beyond the Jordan River.

23 And Jesus went about all Galilee, teaching in their synagogues, and preaching the gospel of the kingdom, and healing all manner of sickness and all manner of disease among the people. 24 And his fame went throughout all Syria: and they brought unto him all sick people that were taken with divers diseases and torments, and those which were possessed with devils, and those which were lunatick, and those that had the palsy; and he healed them. 25 And there followed him great multitudes of people from Galilee, and from Decapolis, and from Jerusalem, and from Judaea, and from beyond Jordan.