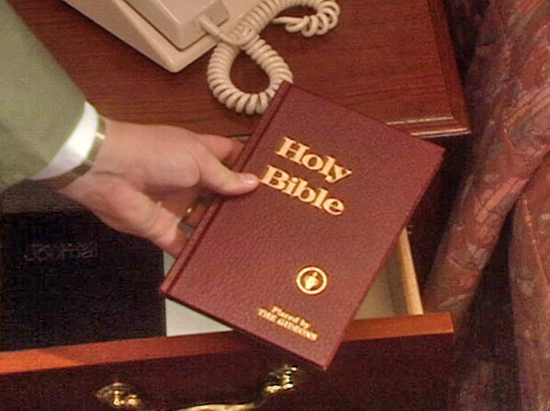 The definition of “politically correct” is constantly changing, shaped and formed by the moral standards that the current society deems acceptable. What was politically and morally correct last year, may not be an acceptable belief today. Seemingly, the direction these moral “standards” are taking is leaning more and more towards the left as Christians sit idly by, keeping their mouths shut, and watching the show. Another example has presented itself this week.

Georgia park officials say they have ordered the removal of Bibles from all rooms at state lodges and cabins. This came after a complaint from a single guest. The Bibles are to be removed until managers can “fully investigate the issue and make an informed decision”. No timetable has been set for a final decision on allowing the Bibles back into the rooms.

In all likelihood, the decision will stand as is, especially if Christians sit idly by and allow the absence of Bibles in hotels, motels, and other guest rooms to become the socially acceptable practice. It’s as if over the past few decades, Christians have forgotten the lessons, sacrifices, and diligence it takes to remain a viable “voice” in the society and instead, rather than lead, are content to let the society guide them down whatever path the “other guys” deem acceptable.