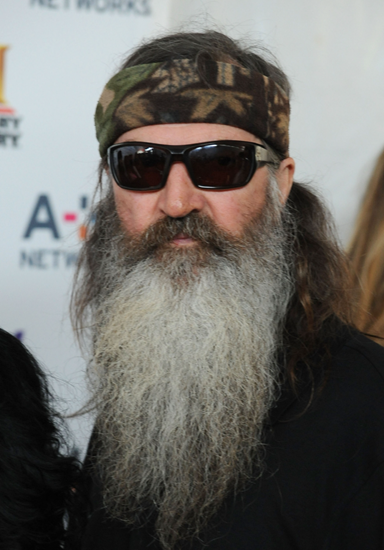 A&E took another swing at Christian morals today when they announced that “Duck Dynasty” patriarch Phil Robertson has been suspended from the hit A&E reality series indefinitely after stating in a magazine article that gays were sinners. The statements were made in the January 2014 edition of GQ magazine. According to CBS News:

“In a statement, A&E said it was extremely disappointed to see Robertson’s anti-gay remarks, which it said were based on his personal beliefs and do not reflect those of A&E Networks or the show. A&E called itself a supporter of the lesbian and gay community.”

The channel’s move was lauded by gay civil rights group GLAAD who condemned Robertson’s remarks as “some of the vilest and most extreme statements uttered against LGBT people in a mainstream publication”.  GLAAD Spokesman Wilson Cruz continued and suggested Robertson be pulled from the network:

“Phil and his family claim to be Christian, but Phil’s lies about an entire community fly in the face of what true Christians believe.  Phil’s decision to push vile and extreme stereotypes is a stain on A&E and his sponsors, who now need to re-examine their ties to someone with such public disdain for LGBT people and families.”

Major media outlets were quick to note their support for homosexual rights using colorful commentary to bolster their liberal stance. CNN claimed that the star was suspended for “slamming gays”. CBS said Robertson was suspended after “disparaging gays as sinners akin to adulterers and swindlers” while for some unexplained reason, the Huffington Post concluded their report with a pictorial montage hitlist of “anti-gay celebrities”

New York Times took a more tactful approach reporting quite simply that Robertson “denounced gay sex in the magazine and called it a sin”.

Robertson quickly responded to criticism of his GQ remarks saying that he “would never treat anyone with disrespect” because they are different.  In a statement released to the public in response to the controversy, Robertson said:

“I myself am a product of the 60s; I centered my life around sex, drugs and rock and roll until I hit rock bottom and accepted Jesus as my Savior. My mission today is to go forth and tell people about why I follow Christ and also what the bible teaches, and part of that teaching is that women and men are meant to be together. However, I would never treat anyone with disrespect just because they are different from me. We are all created by the Almighty and like Him, I love all of humanity. We would all be better off if we loved God and loved each other.”

Truth be told, in the article Robertson simply stated that male homosexual sex was “just not logical” and when asked what he considered a “sin”, he responded:

Robertson then went on to paraphrase Corinthians as support for his stance against homosexuality:

“Don’t be deceived. Neither the adulterers, the idolaters, the male prostitutes, the homosexual offenders, the greedy, the drunkards, the slanderers, the swindlers—they won’t inherit the kingdom of God. Don’t deceive yourself. It’s not right.”

Robertson also pointed out that judging sinners, or anyone for that matter, was not a Christian trait.

“We never, ever judge someone on who’s going to heaven, hell. That’s the Almighty’s job. We just love ’em, give ’em the good news about Jesus—whether they’re homosexuals, drunks, terrorists.”

Past controversy at A&E

This is not the first time A&E has attempted transparent attacks against the “goodness” of the show. In a May 2013 social media firestorm, it was reported that A&E asked Phil to stop saying a prayer at the end of the show to which Phil replied, “No prayer, no show”.

More controversy followed when Robertson had complained in October 2013 that A&E had inserted “fake bleeps” in segments of the show making it appear as if profanity had been used. Robertson’s explanation was short and to the point, “We don’t cuss.”

Robertson has also complained about the network’s curious omission of the name “Jesus”. According to Robertson:

“When we prayed we said, ‘In Jesus’ name, amen.’ They would just have me say, ‘And thank you Lord for the food, thank you for loving us, amen.’

According to Robertson, it was because the network didn’t want to “offend some of the Muslims”.

Fans lash out at A&E

Robertson supporters were quick to lash out at A&E’s decision on social networks.

“Once again, those asking for tolerance being intolerant. Phil is right. Stand your ground and live your beliefs. If the others dont like it, you have lost nothing but you have gained your self respect.”

“I love that Phil Robertson doesn’t shy away from truth. His anti-homosexuality comments put him in the line of fire, but he stood firm.”

“I agree, everyone is so politically correct that speaking your mind gets you hated. Phil is correct though, at what point in human history did our moral compass get shot to hell.”

While JC James pointed out:

“He quoted scripture. A person either believes in the scripture and the Author or not. What people don’t realize is this “choice” is not biological, not genetic, not Christian, not Hindu, not Muslim, not Native American, not of human civilization which is procreation.”

“It’s funny how on one hand you’ll hear all these complaints that no one is ever honest these days and they’re just fake but what do you expect when you go after someone when they are honest. It’s to no one’s advantage to be honest about how they feel anymore. We’re at a point now to where you have to walk around being the person people expect you to be rather than the person you are.”

“Nobody forces anyone to believe what he believes. It is as simple as that. Christians (even though the article/Gay/Lesbian group) says otherwise. According to the Bible, homosexuality is a sin, just like lying, stealing, etc. If you don’t believe in Christianity, that is your right. No doubt about it. Just because someone calls out what he believes to be a sin, doesn’t mean he is judging that person. In fact his statement says to not judge them even though they are sinners.”

Bradford Lombardi summed up the incident quite eloquently when he said:

“There is nothing shocking about his statements if you are at all familiar with the show or with Mr. Robertson. This was a planned attack on one of the few moral programs on television. For A&E to bow to the pressure of the LGBT community to suspend a man of integrity for answering a question shows tolerance has become a one-way street with the so-called liberals who control most of the media.”

We pointed out in a previous post (Rolling Eyes and Sideways Glances – How America lost the Bible Belt) how Christians’ apathetic complacency is allowing a dramatic decrease in society’s long-held moral values. The Christian Post suggested an active approach be taken to what they feel could erupt into a “culture war”, a suggestion I strongly agree with.

“Those of us who agree fundamentally with Robertson [should] make clear that: 1) we are unashamed of our belief in Jesus and in biblical morality. 2) We stand against the mistreatment of all people, including gays and lesbians. 3) We will not support the radical redefinition of marriage, regardless of the cost involved, nor do we see cultural capitulation to gay activism as inevitable.”

We will remind you that in addition to Duck Dynasty, A&E shows include other family favorites such as [sarcasm] Bates Motel, Gene Simmons Family Jewels, Bad Ink, The Killer Speaks, Those Who Kill, Growing up Gotti, Growing up Twisted, and Tattoo Highway.

A&E is a joint venture between Hearst Corporation and Disney-ABC Television Group.

All “Duck Dynasty” products are licensed under A&E.  “Duck Commander” products however, are owned solely by the Robertson family.

Feedback can be sent to feedbackaetv@aenetworks.com