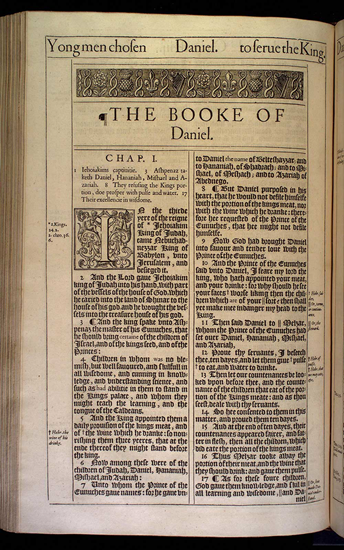 Daniel is an account of the activities and visions of Daniel, a Jew of noble heritage who was exiled to Babylon. The message of Daniel demonstrates that just as the God of Israel saved Daniel and his friends from their enemies, so he would save all of Israel from their period of repression.

Daniel is one of the most debated books in the Bible

Daniel is oft-debated among biblical scholars. Several aspects of the book make it unique – and controversial. It was written in two languages (Hebrew and Aramaic) and narrated in two different voices (first person and third person). It is organized in an unusual two-part structure and has even been placed in various positions in the arrangement of books in the Hebrew bible. No other book in the Bible is rife with such controversy.

Regardless, Daniel provides eight different dates which imparts important historical evidence of the events that are described. The earliest date references the third year of the reign of King Jehoiakim – 605 BC. This hints that Daniel was one of the first Hebrews to be taken into captivity by the Babylonians and deported to Mesopotamia. He last references the Persian royal court during the third year of King Cyrus (537 BC). This means Daniel was witness to the entire period of the neo-Babylonian empire.

Here are the various dates provided by Daniel.

These dates were critical periods in Jerusalem’s history. Nebuchadnezzar invaded Jerusalem three times, each time more brutal than the prior. The final assault in 588 BC resulted in the city being demolished and the Great Temple destroyed. The attack marked the end of the Davidic kingship in Judah. And Daniel was there to witness the tragic events firsthand.

The difference in Greek and Hebrew translations of Daniel

1. The Prayer of Azariah and Song of the Three Holy Children, placed after Daniel 3:23;

2. The story of Susanna and the Elders, placed before chapter 1 in some Greek versions and after chapter 12 in others;

3. The story of Bel and the Dragon, placed at the end of the book.

The stories are included in Roman Catholic and Eastern Orthodox bibles but are considered apocryphal books by Protestants.

Who wrote the book of Daniel?

The origin and purpose of Daniel is one of the biggest questions in the Bible. It was believed that Daniel was a Hebrew courtier employed by King Nebuchadnezzar of Babylonia. His writings are a memoir or diary of events that took place at the time. This is the traditional belief today.

Daniel as a collection of writings

Another theory proposes Daniel is a collection of writings from various sources or authors. This theory posits the books were a collection of materials put together over the course of two or three hundred years. In this instance, Daniel would be a literary creation, a story written to illustrate an idea or lesson.

Daniel written at a much later period

Some believe Daniel was written much later than 605 BC, possibly by a Palestinian Jew living at the time of Antiochus IV Epiphanes around 200 BC. It is difficult to reconcile this theory though since linguistics show the Aramaic section of the book is based on a dialect that dates to at least 700 BC.

Another problem with this theory relates to manuscripts found in the caves at Qumran. Eight copies of Daniel were found in the caves. Since these manuscripts have been dated to about 150 BC, if Daniel were written around 200 BC, this would mean Daniel was accepted into the canon despite being written only 40 years prior in an area only a few hundred miles away. If this were the case, it is not likely Daniel would have been included in the Canon.

If Daniel was written later than the author indicates, should readers consider the book a forgery or falsehood? Certainly not. Writing a book and attributing authorship to another person was a known literary practice in the ancient world (termed Pseudonymity). It is rare in our culture today but was common in accent times. And even if the book was written later, most believe that the stories about Daniel existed already, either passed via word of mouth or recorded in a written record.

Today the common belief is that the book of Daniel is a combination of writings. This offers the best explanation for the somewhat tumultuous composition, the varying languages used, and the varied structure and voice throughout the book. In other words, the book of Daniel could be a blend of third-person reports and a first-person memoir.

Why was Daniel written in two languages?

Equally debatable is the question of why Daniel was written in two different languages. Only one other book in the Bible shares the trait (Ezra). Some believe the Aramaic parts, which compose chapters 2 through 7, related to the people of Babylonia and Persia and were directed at them in their own language. Others believe the entire book was originally written in Aramaic with the first and last parts translated to Hebrew to ensure the books were considered canonical. Others believe the dual-language approach was a literary tool used purposely by the author. Possibly the Hebrew parts are based on the original writings (in Hebrew) of Daniel while the Aramaic parts were based on the official Aramaic documents from the Babylonia royal archives.

Daniel is indeed an enigma, an unusual book with a confusing history. Parts of the book seem certain to have originated around 600 BC, during the time of the events Daniel describes. And no parts of the book contradict any Christian theological tenets. Parts of Daniel that were at one time considered historically questionable have since been reaffirmed. And archaeological discoveries have confirmed the reliability of the book in many instances (e.g. proof that Belshazzar was indeed a real historical figure).

Furthermore, Daniel is mentioned by Jewish historian, Josephus, who reported that Daniel’s body lay in a tower in Ecbatan in Parthia, alongside the bodies of the kings of the Medes and Persians.

Thus, it is best to presume Daniel’s canonical inclusion in the Bible is just and the book is worthy of Christian study.

Outline of the book of Daniel

Shadrach, Meshach, and Abednego refuse to worship Nebuchadnezzar’s golden god and are thrown into a fiery furnace because of their rebellion (Daniel 3:1 – 3:30)

King Nebuchadnezzar demands the wise men tell him his dream – then Daniel and the wise men are sentenced to execution (Daniel 2:1 – 2:18)