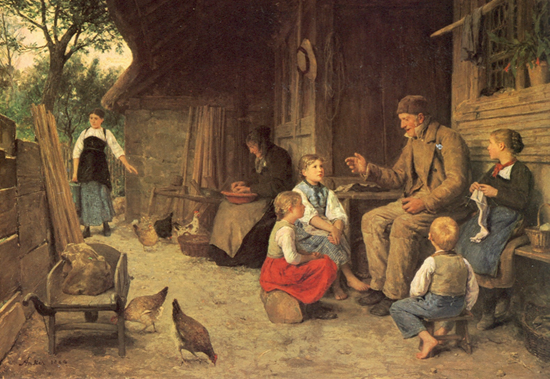 It is likely that at least some of the histories recorded in the Bible were not documented at the time they occurred. For instance, the creation accounts in Genesis were almost certainly not recorded millions of years ago. Likely, the creation stories  transitioned to the Bible’s pages through oral tradition – the transfer of knowledge orally from one generation to another. If parts of our Bible were passed orally, can they still be accurate?

Detractors will be quick to jump to the conclusion that any documented occurrence based on oral communication will include inaccuracies. Inherent in this opinion is the belief that generations and generations of people painstakingly memorized sections of the Bible. They are correct – oral communication is not as accurate as written communiqué – but this is surely not how oral tradition worked.

Memorization is most effective when the message is remembered through song, poem, or ballads. Even in modern times when youthful songs and poems have fallen out of favor and hence not practiced as much, most can still remember poems and songs taught to them in their youth. Scientists believe this is because musical songs and poetic rhythms fit the structure of our brain better than standalone strings of words. The powerful images that result from rhythmic compositions combined with rhyme, assonance, and repetition seem to stick in our minds.  The efficiency and effect are enhanced by dopamine, which is released when we hear the pleasurable sounds of music.

Our ancestors were masters of oral tradition.  In ancient times, participants recognized the importance of sustaining their legacy and thus, historical stories in the forms of song and poem took on much greater importance. Cognitive scientists David Rubin wrote:

“Oral traditions depend on human memory for their preservation. If a tradition is to survive, it must be stored in one person’s memory and be passed on to another person who is also capable of storing and retelling it. All this must occur over many generations… Oral traditions must, therefore, have developed forms of organization and strategies to decrease the changes that human memory imposes on the more casual transmission of verbal material.”

Thus, learning the culture’s songs and poems was a high priority, one that was practiced not only in youth, but well into adulthood, and ancients would have recognized their histories could more easily be remembered if presented in a rhythmic manner.