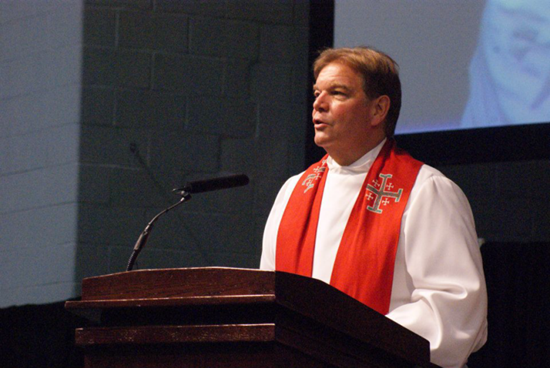 Rev. Dr. William (Bill) Shilady is the Executive Director of the United Methodist City Society in New York City.  He has an undergraduate degree in Religion and Business Administration from Lebanon Valley College and a Master of Divinity degree from Duke Divinity School.  Previously he was the senior pastor at Park Avenue United Methodist Church in Manhattan.  He was Hillary Clinton’s pastor during her failed run against Donald Trump for President in 2016.

On the morning of November 9, 2016, Rev. Bill Shillady, sent her Hillary Clinton this letter the day after she lost the presidential election to Donald Trump.

For the disciples and Christ’s followers in the first century, Good Friday represented the day that everything fell apart. All was lost. The momentum and hope of a man claiming to be the Son of God, the Messiah who was supposed to change everything, had been executed.

Even though Jesus told his followers three days later the temple would be restored, they had no idea of what that Sunday would be. They betrayed, denied, mourned, fled and hid. They did just about everything BUT feel good about Friday and their circumstances.

For us, Friday is the phone call from the doctor that the cancer is back. It’s the news that you have lost your job. It’s the betrayal of a friend, the loss of someone dear. Friday is the day that it all falls apart and all hope is lost. We all have Fridays. But, as the saying goes, “Sunday’s coming!”

Today, you are experiencing a Friday. Your Friday is what happened in the last few weeks and last night in the tragic loss. But Sunday is coming!

Jesus completed the excruciating task of giving up his life as a sacrifice for the sins of the world. It was his faith and belief in his heavenly Father, that gave him the grace and peace to submit to Friday. While death had seemingly won, Jesus knew better. When he said, “It is finished,” it wasn’t meant to be a statement of concession. It was a declaration that a new day was on the way.

Friday is finished. Sunday is coming. Death will be shattered. Hope will be restored. But first, we must live through the darkness and seeming hopelessness of Friday.

You know one of my favorite sayings is “God doesn’t close one door without opening another, but it can be hell in the hallway.” My sister Hillary. You, our nation, our world is experiencing a black Friday. Our hope is that Sunday is coming. But it might well be hell for a while.