The Second or St. Thomas’s Gospel of the Infancy of Jesus Christ 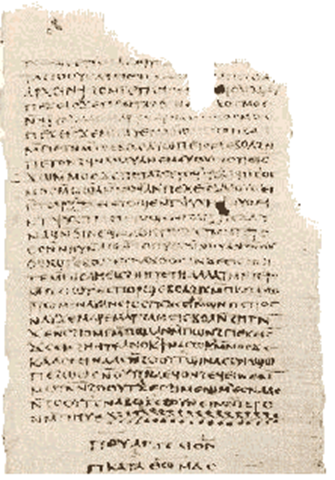 The Second or St. Thomas’s Gospel of the Infancy of Jesus Christ manuscript of the Coptic text, found in 1945 at Nag Hammadi, Egypt, is dated at around 340 AD. It was first published in a photographic edition in 1956. This was followed three years later (1959) by the first English-language translation, with Coptic transcription.

Note: As with any apocryphal writing, Christians must take care to recognize historical writings regarding Christianity may have ulterior motives and thus, can contradict our biblical texts.  They are presented here for research purposes.

The Writing of the Holy Apostle Thomas Concerning the Childhood of the Lord.

1.  I Thomas the Israelite have deemed it necessary to make known to all the brethren of the heathen the great things which our Lord Jesus Christ did in His childhood, when He dwelt in the body in the city of Nazareth, going in the fifth year of His age.

2.  On one of the days, there being a rainstorm, He went out of the house where His mother was, and played on the ground where the waters were flowing.  And He made pools, and brought in the waters, and the pools were filled with water.  Then He says:  It is my will that you become clear and excellent waters.  And they became so directly.  And a certain boy, the son of Annas the scribe, came past, and with a willow branch which he was carrying threw down the pools, and the water flowed out.  And Jesus turning, said to him:  O impious and wicked, how have the pools wronged thee, that thou hast emptied them?  Thou shalt not go on thy way, and thou shalt be dried up like the branch which thou art carrying.  And as he went along, in a short time he fell down and died.  And when the children that were playing with him saw this, they wondered, and went away and told the father of the dead boy.  And he ran and found his child dead, and he went away and reproached Joseph.

3.  And Jesus made of that clay twelve sparrows, and it was the Sabbath.  And a child ran and told Joseph, saying:  Behold, thy child is playing about the stream, and of the clay he has made sparrows, which is not lawful.  And when he heard this, he went, and said to the child:  Why dost thou do this, profaning the Sabbath?  But Jesus gave him no answer, but looked upon the sparrows, and said:  Go away, fly, and live, and remember me.  And at this word they flew, and went up into the air.  And when Joseph saw it, he wondered.

4.  And some days after, when Jesus was going through the midst of the city, a boy threw a stone at Him, and struck Him on the shoulder.  And Jesus said to him:  Thou shalt not go on thy way.  And directly falling down, he also died.  And they that happened to be there were struck with astonishment, saying:  Whence is this child, that every word he says is certainly accomplished?  And they also went and reproached Joseph, saying:  It is impossible for thee to live with us in this city:  but if thou wishest to do so, teach thy child to bless, and not to curse:  for he is killing our children, and everything that he says is certainly accomplished.

5.  And Joseph was sitting in his seat, and the child stood before him; and he took hold of Him by the ear, and pinched it hard.  And Jesus looked at him steadily, and said:  It is enough for thee.

6.  And on the day after he took Him by the hand, and led Him to a certain teacher, Zacchæus by name, and says to him:  O master, take this child, and teach him his letters.  And he says:  Hand him over to me, brother, and I shall teach him the Scripture; and I shall persuade him to bless all, and not to curse.  And Jesus hearing, laughed, and said to them:  You say what you know; but I know more than you, for I am before the ages.  And I know when your fathers’ fathers were born; and I know how many are the years of your life.  And hearing this, they were struck with astonishment.  And again Jesus said to them:  You wonder because I said to you that I knew how many are the years of your life.  Assuredly I know when the world was created.  Behold, you do not believe me now.  When you see my cross, then will ye believe that I speak the truth.  And they were struck with astonishment when they heard these things.

7.  And Zacchæus, having written the alphabet in Hebrew, says to Him:  Alpha.  And the child says:  Alpha.  And again the teacher:  Alpha; and the child likewise.  Then again the teacher says the Alpha for the third time.  Then Jesus, looking in the master’s face, says:  How canst thou, not knowing the Alpha, teach another the Beta?  And the child, beginning from the Alpha, said by Himself the twenty-two letters.  Then also He says again:  Hear, O teacher, the order of the first letter, and know how many entrances and lines it has, and strokes common, crossing and coming together.  And when Zacchæus heard such an account of the one letter, he was so struck with astonishment, that he could make no answer.  And he turned and said to Joseph:  This child assuredly, brother, does not belong to the earth.  Take him, then, away from me.

8.  And after these things, on one of the days Jesus was playing with other children on the roof of a house.  And one boy was pushed by another, and hurled down upon the ground, and he died.  And seeing this, the boys that were playing with him ran away; and Jesus only was left standing upon the roof from which the boy had been hurled down.  And when the news was brought to the parents of the dead boy, they ran weeping; and finding their boy lying dead upon the ground, and Jesus standing above, they supposed that their boy had been thrown down by Him; and fixing their eyes upon Him, they reviled Him.  And seeing this, Jesus directly came down from the roof, and stood at the head of the dead body, and says to him:  Zeno, did I throw thee down?  Stand up, and tell us.  For this was the name of the boy.  And at the word the boy stood up and adored Jesus, and said:  My lord, thou didst not throw me down, but thou hast brought me to life when I was dead.

9.  And a few days after, one of the neighbors, when splitting wood, cut away the lower part of his foot with the axe, and was on the point of death from loss of blood.  And a great number of people ran together, and Jesus came with them to the place.  And He took hold of the young man’s wounded foot, and cured him directly, and says to him:  Rise up, split thy wood.  And he rose up and adored Him, giving thanks, and splitting the wood.  Likewise also all that were there wondered, and gave thanks to Him.

11.  And when Jesus had come to the eighth year of His age, Joseph was ordered by a certain rich man to make him a couch.  For he was a carpenter.  And he went out into the field to get wood; and Jesus went with him.  And having cut two pieces of wood, and smoothed them with the axe, he put the one beside the other; and in measuring he found it too short.  And when he saw this he was grieved, and sought to find another piece.  And seeing this, Jesus says to him:  Put these two pieces together, so as to make both ends even.  And Joseph, in doubt as to what the child should mean, did as he was told.  And He says to him again:  Take a firm hold of the short piece.  And Joseph, in astonishment, took hold of it.  Then Jesus also, taking hold of the other end, drew it towards Himself, and make it equal to the other piece of wood.  And He says to Joseph:  Grieve no more, but do thy work without hindrance.  And seeing this, he wondered greatly, and says to himself:  Blessed am I, because God has given me such a boy.  And when they came back to the city, Joseph gave an account of the matter to Mary.  And when she heard and saw the strange miracles of her son, she rejoiced and glorified Him, with the Father and the Holy Spirit, now and ever, and for evermore.  Amen.