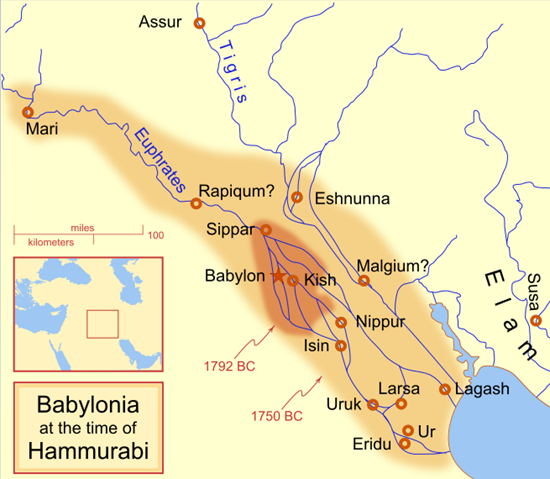 The Epic of Atrahasis is the fullest Mesopotamian account of the Great Flood. The text is known from several versions: two written by Assyrian scribes (one in the Assyrian, one in the Babylonian dialect), the third one (on three tablets) was written during the reign of king Ammi-saduqa of Babylonia (c.1647-c.1626 BCE).

[i.b35] Enlil committed an evil deed against the people.

[i.c11] Atrahasis made ready to speak,
and said to his lord:
“Make me know the meaning of the dream.
let me know, that I may look out for its consequence.”

[i.c15] Enki made ready to speak,
and said to his servant:
“You might say, ‘Am I to be looking out while in the bedroom?’
Do you pay attention to message that I speak for your:

[i.c23] Flee the house, build a boat,
forsake possessions, and save life.

[i.c29] Roof her over like the Apsu,note
[i.c30] so that the sun shall not see inside her.
Let her be roofed over fore and aft.
The gear should be very strong,
the pitch should be firm, and so give the boat strength.
I will shower down upon you later

[i.c35] a windfall of birds, a spate of fishes.'”
He opened the water clock and filled it,

[i.c37] he told it of the coming of the seven-day deluge.

Atrahasis and the Elders

Atrahasis received the command.
He assembled the Elders at his gate.

[i.c40] Atrahasis made ready to speak,

[i.c41] and said to the Elders:
“My god does not agree with your god,
Enki and Enlil are constantly angry with each other.
They have expelled me from the land.

[i.c45] Since I have always reverenced Enki,
he told me this.

Nor can I set my feet on the earth of Enlil.
I will dwell with my god in the depths.

Construction of the Ark

[ii.11] The carpenter carried his axe, the reedworker carried his stone, the rich man carried the pitch, the poor man brought the materials needed.

[Lacuna of about fifteen lines; the word Atrahasis can be discerned.]

Boarding of the Ark

[ii.35] An abundance of birds flying in the heavens,
the cattle and the … of the cattle god,

[ii.42] … his family was brought on board.
While one was eating an another was drinking,

[ii.45] he went in and out; he could not sit, could not kneel,
for his heart was broken, he wat retching gall.

The outlook of the weather changed.
Adadnote began to roar in the clouds.

[ii.51] He brought pitch to seal his door.
By the time he had bolted his door,
Adad was roaring in the clouds.
The winds were furious as he set forth,

[ii.55] He cut the mooring rope and released the boat.

[iii.11] … the flood came forth. Its power came upon the peoples like a battle,

[iii.13] one person did not see another, they could not recognize each other in the catastrophe.

[Lacuna. The gods find themselves hungry because there are no farmers left and sacrifices are no longer brought. When they discover that Atrahasis has survived, they make a plan to make sure that the noise will remain within limits: they invent childbirth, infant mortality, and celibacy.]

[iii.45] Enki made ready to speak,
and said to Nintu the birth goddess:
“You, birth goddess, creatress of destinies,
establish death for all peoples!