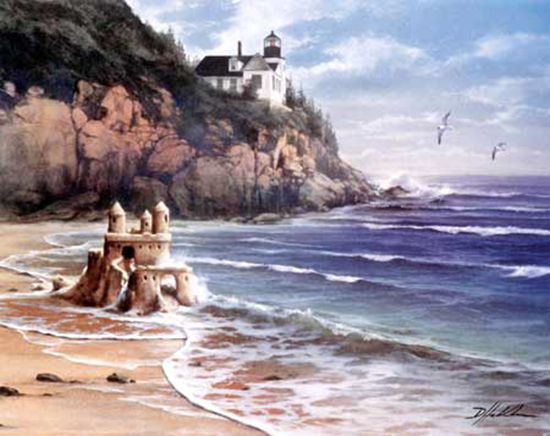 Concluding his Sermon on the Mount, Jesus told his listeners:

When Jesus finished his sermon, the crowds were amazed at his teachings because he taught as one with authority, not as their teachers of the law typically taught.

Jesus concluded his Sermon on the Mount with a powerful and lasting message that presented in easy-to-understand terms, the simple choice each of us must make. Jesus doesn’t command nor beg that we follow his example. He simply says “Choose!”

It is wise to hear Jesus’ message and live by it. Those who choose to not heed Jesus’ lessons are choosing to follow a path to destruction. Building on God’s foundation (the rock) requires not just hearing, but obeying Jesus’ teachings.

Jesus told one last story before he concluded the Sermon on the Mount. The story in essence, explains via a parable (Jesus as our spiritual rock) what should be done with the lessons that he taught – and what will happen if we choose to ignore them.

Two men built identical houses differing only by their foundations. When the test of time comes, only the house founded on rock survives. The Bible is full of stories demonstrating “believers” who fell away during a time of testing (e.g. the Israelites desire to return to Egypt when circumstances grew tough, the Christians who abandoned Paul when their safety was threatened).  Standing steadfast on your beliefs can be hard, especially if those beliefs are not based on a firm foundation and followed with little zest.

It is important to recognize that the parable compares the house built on a rock to those who “hear these words and put them into practice.” Those who hear *and* obey are like the wise man who built his home on a steady foundation. It is not good enough to read the Bible, understand the Bible, or go to Church. A true Christian is proven by their obedience to Jesus and his teachings. Only then will you survive the storms that inevitable test each of us.

In the ancient east, it was typical for a teacher (e.g. rabbi) to cite others to make a point. Jesus however, assumed the role of authority, proudly and confidently delivering God’s message to the listeners. Jesus authority came from God, not from books of law that were used by other teachers of his time. As a result, both Mark and Luke confirm the crowd’s reaction to Jesus’ teachings – they were astonished.

The Sermon on the Mount’s profound impact

It is easy to imagine, given the impact of Jesus’ Sermon on the Mount (“the people were amazed”), that the Pharisees were alarmed by his teachings. The typical Pharisee teacher simply taught what scholars had said about the scripture. Jesus however, explained what the Old Testament Law meant and applied its principles to everyday people. The people had never witnessed a teacher such as this – and their eyes were forever opened.

The crowds were “amazed” at his teaching

The word translated to “amazed” could be more accurately translated as “drive one out of his senses by a sudden shock”. Obviously Jesus’ lesson that day produced an overwhelming impact on the people who heard his message.

28 When Jesus had finished saying these things, the crowds were amazed at his teaching, 29 because he taught as one who had authority, and not as their teachers of the law.

24–25 “These words I speak to you are not incidental additions to your life, homeowner improvements to your standard of living. They are foundational words, words to build a life on. If you work these words into your life, you are like a smart carpenter who built his house on solid rock. Rain poured down, the river flooded, a tornado hit—but nothing moved that house. It was fixed to the rock.

26–27 “But if you just use my words in Bible studies and don’t work them into your life, you are like a stupid carpenter who built his house on the sandy beach. When a storm rolled in and the waves came up, it collapsed like a house of cards.”

28–29 When Jesus concluded his address, the crowd burst into applause. They had never heard teaching like this. It was apparent that he was living everything he was saying—quite a contrast to their religion teachers! This was the best teaching they had ever heard.

7:28 When Jesus finished saying these things, the crowds were amazed by his teaching, 7:29 because he taught them like one who had authority, not like their experts in the law.